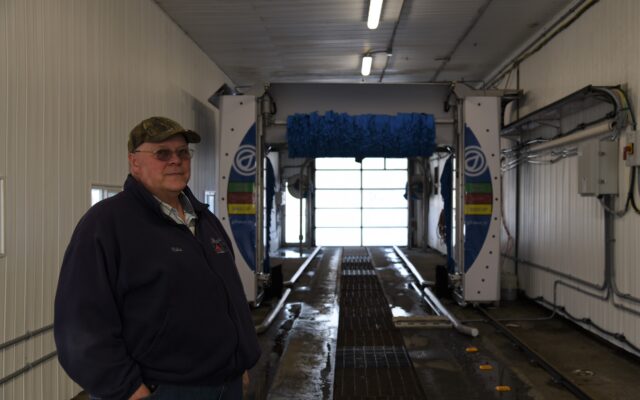 The 20 year-old car conveyor belt was worn out, with the parts becoming harder to find through online retail sites such as ebay. The parts for the computer that ran the belt weren’t available anymore and if there was a power surge the computer system could be down for a few months.

The owner of Bradley’s Mike Cyr replaced the conveyor belt with a Mark VII Choicewash automated car washer that cost more than $300,000 and makes up for his shortage of car washing attendants.

Bradley’s no longer offers car prepping from car attendants. Cyr has also cut his store hours from 24 hours a day to closing Bradley’s down at midnight with deli’s hours cut back from closing at 5 p.m. to 2 p.m. because he can’t find enough staff for the deli.

“We had to do something. The [car conveyor] machine was aged out. It’s like a person has a car and if the car is 20 to 25 years old it’s only going to be so long,” Cyr said.

Cyr ordered the automated car wash in March 2022 and waited seven months for the delivery.

Cyr said the trend for car washes is around 90 percent for an automated machine like the Mark VII Choicewash that offers both touchless and soft washes rolling over the car for a wash. With the car conveyor system Cyr was using 10,000 gallons of water per day. Now he uses about a third of that with the automated machine.

“People were spoiled to that, [the car prepping] was a good service,” Cyr said. “We were washing the car essentially twice, but if you can’t get the labor it’s no good.”

The cost for a car wash has stayed the same at from $18 to $20 per car wash with $3 more for the ultimate car wash that includes a ceramic glaze that gives vehicles a shine. The ceramic glaze wash costs around $2,400 per barrel, according to Cyr.

“It’s a slower process but the water and sewer company [prices] have gone up for the last three years and I think they’re still going up again,” Cyr said.

The car conveyor system would have around three attendants prepare the car by knocking snow off, rinsing the back and front fenders and underneath the car. It got harder for Cyr to get the workers needed to attend the car wash, which paid from $14 to $15 per hour for part-time hours. Other places like Walmart are hiring at $17 to $19 per hour, making competition in hiring harder for Cyr.

“It’s a tough deal. Some people are not happy that we changed the system. I sympathize with them but I’ve done the best that I can do,” Cyr said.

The rising cost of food products for the deli have made it harder for Cyr to keep his prices low. For example, a ball of dough for making pizza used to cost $1 two years ago and is up to $1.85. Next year, Cyr says he’ll have to raise his prices that he has tried to keep down.

Petroleum is Cyr’s highest costing product to sell at Bradley’s with the average cost at $103.71 per barrel — about $30 more compared with a year ago. Credit card fees used by customers to pay at the pump have cut into more than half of Cyr’s profits, which averages 25 cents per gallon.

“You got to change with the world or the world changes around you,” Cyr said.

Bradley’s Citgo is one of two family-owned gas station and convenience store businesses left in Presque Isle, the second being Perry’s Mini Mart on Route 1.

Next year's Caribou City Council will include a new member and a longtime councilor thanks to Tuesday's election.
Pets END_OF_DOCUMENT_TOKEN_TO_BE_REPLACED

When I wrote the first story of our dog Odie, I didn’t know that I would write a Part 2, but there were so many more stories that I decided more of this little dog’s story needed to be told.
What's Happening This Week END_OF_DOCUMENT_TOKEN_TO_BE_REPLACED