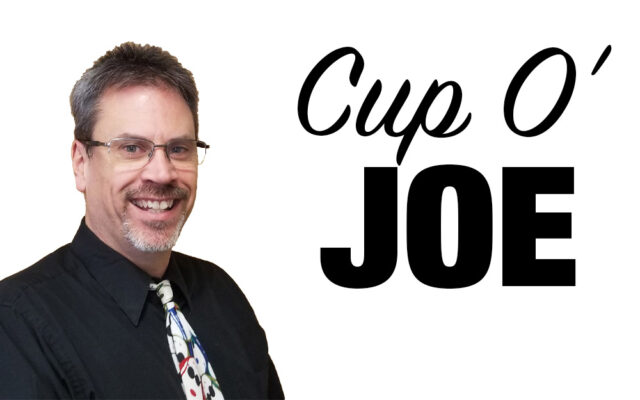 One final cup for the road

Joseph Cyr • January 6, 2023
Change. It sounds like such a simple thing, and yet it can often be so hard. For many it is embraced as a fresh new start filled with endless possibilities. While for others, it can seem like an insurmountable task filled with much trepidation.

Change. It sounds like such a simple thing, and yet it can often be so hard. For many it is embraced as a fresh new start filled with endless possibilities. While for others, it can seem like an insurmountable task filled with much trepidation.

I think I fall somewhere in the middle.

Yes, the rumors are true. I am saying goodbye to the “Only newspaper in the world interested in Houlton, Maine.” But I couldn’t let that happen without sharing one final cup for the road.

After almost 13 years with the Houlton Pioneer Times, and just a few months shy of my 30th year as a newspaper journalist, the time has come for me to pass the torch on to someone else and pursue something new but yet not completely different.

I am joining the Houlton Band of Maliseet Indians as their new communications director and am excited by the prospect of doing something beyond the realm of journalism. It will be a change to use my skills as a writer and photographer in an entirely new way.

It also means that for the first time in my adult professional life I will have most of my nights and weekends free. The notion of not having to cover a night meeting or game is a completely foreign concept to me because frankly, it is all I have ever done.

Now, I will no longer feel guilty when I should have been at an event, but simply couldn’t make it because two things were happening at the same time or something had come up at home that required my attention. I honestly cannot recall the last time I did not have to work on a Memorial Day, Veterans Day or Fourth of July.

Perhaps, I may finally have time for some of those things I always wanted to try, but never had the time or the ability to do. And of course there is always that list of “honey-do” projects that can no longer be ignored.

Working at the Houlton Pioneer Times has truly been a dream come true for me. I am truly thankful for the opportunity to bring stories to you each and every week.

Sure, at times it was incredibly stressful. And yes, I probably missed out on a few family events along the way, because there was a meeting or game that simply had to be covered.  But I have always taken pride in the fact that I put my work ethic above anything else.

My father taught me at a very early age that if my job started at 8 a.m., it meant that I should arrive no later than 7:30 so that I would be ready to give 100 percent. His lesson is something that has stuck with me throughout my adult life.

Being a journalist, after all, is not just a job. It is a lifestyle. It means you wear that hat 24 hours a day, seven days a week, because the news never sleeps. It doesn’t matter if you are “off,” if something big happens, you cover it.

Over the years, I have been able to tell thousands of stories of incredible people and had a front row seat to some of the most exciting, and yes sometimes heartbreaking, news and sporting events to take place in Aroostook County.

I have witnessed up close the joys of a team winning a state championship, but also had to listen to gruesome details during murder trials or see despair on people’s faces as their home burned to the ground.

I sat through more town council and school board meetings than I can possibly count, but somehow they never got old for me. And as for sporting events, well, those were just the icing on the cake.

I am eternally grateful that my wife and daughters have been so understanding whenever I could not make a family dinner or school concert. Or even more so, for all of the times we were at a store and a person would approach me with a story idea they had.

I am thankful for the many wonderful editors over the years who taught me the right way to be a newspaper reporter and who polished my stories to make me sound better. I am thankful for all of the staff members I have had the privilege of working with, who truly became more of an extended family rather than just coworkers.

I hope that during my time here I may have educated you — the valued reader of this cherished newspaper — on some topic you were unfamiliar with or perhaps entertained you with some of my columns.

And most importantly, I hope that some of my photos may have brought a smile to your face or perhaps even adorned your refrigerators at some point. Covering your local news has been my honor and privilege and I truly thank you for welcoming me into your home.

Next year's Caribou City Council will include a new member and a longtime councilor thanks to Tuesday's election.
Pets END_OF_DOCUMENT_TOKEN_TO_BE_REPLACED

When I wrote the first story of our dog Odie, I didn’t know that I would write a Part 2, but there were so many more stories that I decided more of this little dog’s story needed to be told.
What's Happening This Week END_OF_DOCUMENT_TOKEN_TO_BE_REPLACED