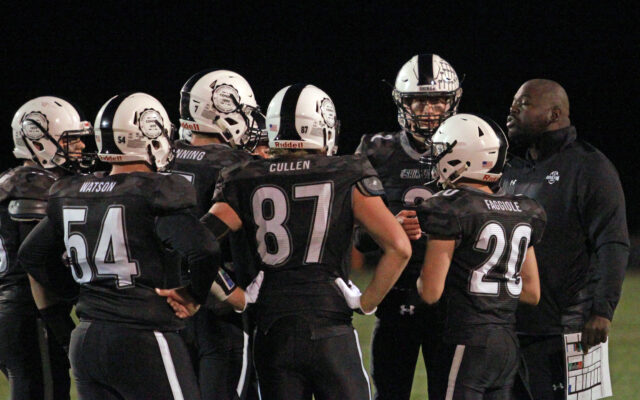 Joseph Cyr • January 6, 2023
After three years with the club, Houlton varsity football coach Jon Solomon has decided to hand the reins over to someone new.

HOULTON, Maine — After three years with the club, Houlton varsity football coach Jon Solomon has decided to hand the reins over to someone new.

Solomon, who also serves as the full-time athletic director for RSU 29, stepped down from the post in December in order to give the school district ample opportunity to find a suitable replacement.

Solomon finishes with a 5-8 overall record with the team, qualifying for the postseason in each of the past two years. He started in 2020, only to see COVID-19 rob the Shires of a chance to compete that season.

In 2021, the Shires finished with a 3-2 record (shortened due to COVID-19) and hosted a home playoff for the first time in the history of the varsity club.

Prior to taking over as the head coach, Solomon served as an assistant coach since coming to Houlton from Bucksport in 2016.

“The program is in a good spot,” Solomon said of his decision to step down. “We have a lot of talented players that will be coming back. I didn’t want to leave the program in a rebuilding mode.”

The added pressures of being the full-time athletic director for the district and a desire to have more time to watch his son Caleb compete in football at Husson University were other factors in his decision to leave coaching.

“Caleb will be a sophomore and with the possibility of him playing a lot more, I wanted to feel like I could go watch him without hurting the team,” he said. “Coaching takes up a lot of time, much more than just Friday nights.”

He noted that because of his role as full-time athletic director, there were times this season that his team did not have his full, undivided attention. Thankfully, Solomon said he could rely on his impressive assistant coaching staff to help pick up the slack.

“I am extremely thankful for (assistants) Mike Carlos, Mike Dobbs, David Day, Andrew Lewis and Brian Reynolds, who devoted so much time to make sure our players had men that cared about them having success on and off the field,” Solomon said. “I also want to thank coaches Joel Sankey at Bucksport for giving me my start in coaching; Kevin Canty and Scott Flagg for what they taught me during my time at Hampden Academy; and lastly Brian Reynolds for giving me the opportunity to grow in different roles as a coach and helping me to make Houlton a home for me and my family.”

Solomon said many may not realize that although football plays one game a week, a varsity coach must spend seven days a week getting their team ready to compete at a high level. That preparation includes spending time analyzing game tape of the Shires most recent contest, as well as film of the upcoming opponent in order to come up with a gameplan.

Beyond the game, football coaches also help players with college decisions, should they desire to continue their playing days beyond high school. He noted how proud he was that in each of his three seasons as varsity coach, the Shires had two graduating seniors go on to play football at the collegiate level.

The district has yet to hire a new football coach, but Solomon said he has high expectations for his successor. In 2022, RSU 29 agreed to add stipends for assistant coaches, which should help in the recruitment of Houlton’s next coach.

He added the team gatherings, particularly the team meal on the night before a game, are some of his fondest memories.

“I will miss the kids and will miss doing gameplans,” he said. “I will also miss my contemporaries. We might get after each other on Friday nights, but we are all really close.”

Next year's Caribou City Council will include a new member and a longtime councilor thanks to Tuesday's election.
Pets END_OF_DOCUMENT_TOKEN_TO_BE_REPLACED

I know many of you have followed DeeDee’s story. DeeDee had leukemia and was under vet care for the past few weeks. Early one recent morning, she lost her battle with leukemia.
What's Happening This Week END_OF_DOCUMENT_TOKEN_TO_BE_REPLACED