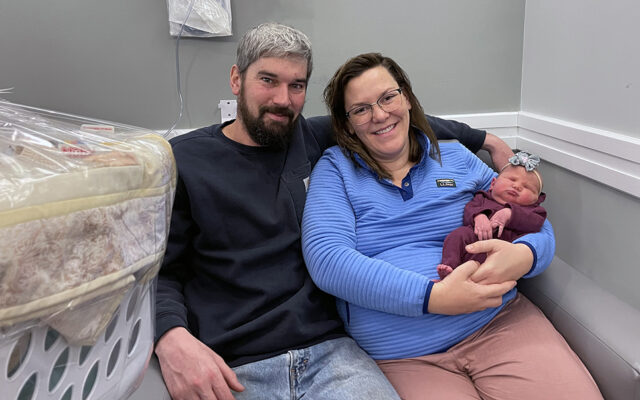 Contributed • January 16, 2023
The first baby born in 2023 at Northern Light AR Gould Hospital in Presque Isle was delivered at 7:56 pm on Saturday, Jan. 7.  While Mildred Amy arrived a little early, mother and daughter are both doing well.

PRESQUE ISLE, Maine — The first baby born in 2023 at Northern Light AR Gould Hospital in Presque Isle was delivered at 7:56 pm on Saturday, Jan. 7.  While Mildred Amy arrived a little early, mother and daughter are both doing well. 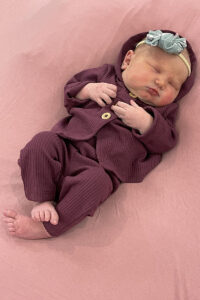 Millie weighed 8 pounds. 1 ounce and was 20.75 inches long.  She was originally due on Jan. 27, but she was apparently ready to join the world a little early, according to parents Rebecca and Michael Guerrette of Frenchville. The couple arrived at the hospital after Becky’s water broke at home. Since trying to induce labor was not working, a c-section was performed for the safety of both mom and daughter.

Becky is a nurse who had previously worked at AR Gould Hospital on the Women and Children’s unit. While she ended up leaving the hospital to take on the position of school nurse in Fort Kent, she always knew that when she was ready to have a baby, she wanted to have it at AR Gould, where she knew the nurses and providers who would care for her.

Ironically, because of the circumstances with an emergency c-section, baby Millie ended up being delivered by Louis Wesley, MD, a provider who joined the hospital’s OB/GYN practice recently and who she had not yet met.

“He was just great. He’s been in to see me a couple of times, and the midwives that I saw for my prenatal care have come in to check in on me too even though it was the weekend,” said Becky.  “The providers and nurses both on this floor and in the OR have been so attentive and reassuring. It’s hard sometimes for a nurse to be a patient, but they have made it such a positive experience for me and for Mike too. I have gotten the care that every new mother needs and deserves.”

The couple were pretty surprised to learn when they arrived at the hospital that their baby would most likely be the first baby born at AR Gould in 2023.
“I just assumed it had already happened, and with Millie due later in the month, it never really even occurred to me that we might have the new year baby,” she said.

In celebration of the first birth of 2023, the Guerrette family was presented with a basket full of baby supplies and other goodies from the hospital. The family also received a homemade quilt, an annual tradition courtesy of the Crown of Maine Quilt Guild. This year’s quilt was made by Denise Kelly and featured panels of a variety of different baby animals.

Next year's Caribou City Council will include a new member and a longtime councilor thanks to Tuesday's election.
Pets END_OF_DOCUMENT_TOKEN_TO_BE_REPLACED

When I wrote the first story of our dog Odie, I didn’t know that I would write a Part 2, but there were so many more stories that I decided more of this little dog’s story needed to be told.
What's Happening This Week END_OF_DOCUMENT_TOKEN_TO_BE_REPLACED