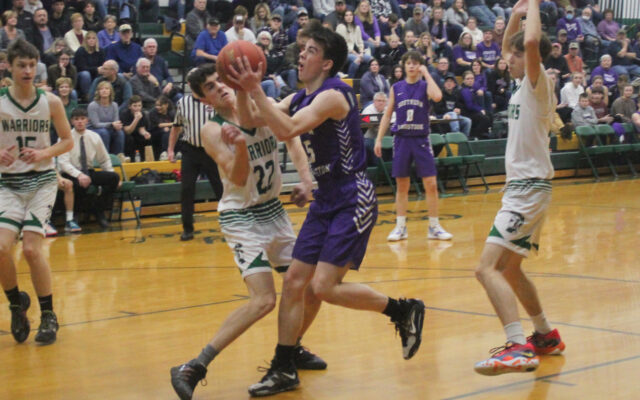 Jessica Potila • January 24, 2023
It was a Warriors vs. Warriors matchup Saturday when Southern Aroostook and Fort Kent met in the St. John Valley.

FORT KENT, Maine — It was a Warriors vs. Warriors matchup Saturday when Southern Aroostook and Fort Kent met in the St. John Valley.

The Fort Kent Warriors remain the top seed in Class C North and moved to an 11-2 record on the season with the loss.

The Fort Kent team dominated the first two quarters of the game, at one point leading by as much as 13 points. Southern Aroostook punched back in the second half outpacing the Warriors on the boards and outscoring them by 10 points in the third quarter and nine in the fourth.

Southern Aroostook Warrior Buddy Porter registered a game high 21 points, Graham Siltz was just behind him with 19 points and Brennan Burpee added another 11.

Next year's Caribou City Council will include a new member and a longtime councilor thanks to Tuesday's election.
Pets END_OF_DOCUMENT_TOKEN_TO_BE_REPLACED

Nearly anyone who has ever had puppies or dogs can relate to “The Zoomies.” The zoomies are defined as those sudden bursts of pent-up energy that cause dogs to run at breakneck speeds back and forth or around and around, or sometimes in a tight little circle.
What's Happening This Week END_OF_DOCUMENT_TOKEN_TO_BE_REPLACED