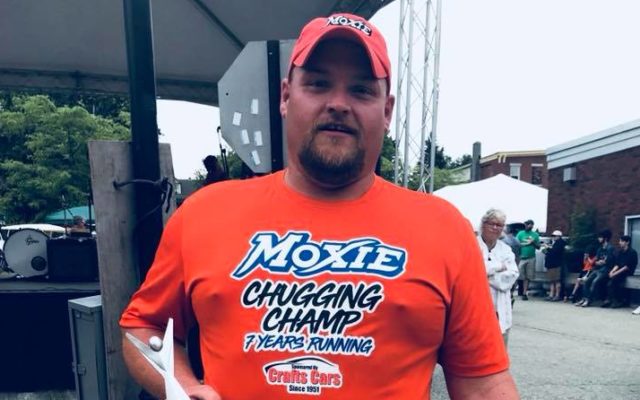 Jen Lynds • July 17, 2018
For most people, July in Maine means warm temperatures, fresh strawberries, and vacations with friends and family.

BRIDGEWATER, Maine — For most people, July in Maine means warm temperatures, fresh strawberries, and vacations with friends and family.

But to Beau Bradstreet, July means a trip to Lisbon with his family for the Moxie Festival and another chance to reign supreme in the Moxie Chugging Challenge.

Bradstreet has won the contest eight years in a row, most recently on Saturday when he downed six cans of the bitter drink in two minutes to once again claim the title.

“I love it,” the Bridgewater resident said Monday. “I have been drinking Moxie all of my life so I am used to it. I have heard a number of descriptions of what it tastes like — cough syrup, molasses. But not to me.”

The sugary drink was created in the nineteenth century by Dr. Augustin Thompson of Union as a medicine to cure multiple ills, including “softening of the brain.” It was designated the official soft drink of Maine on May 10, 2005.

Bradstreet said he first heard about the Moxie Festival’s chugging competition when friends who live down state visited him in Bridgewater and saw him drinking the beverage.

“They told me about the contest,” he said. “At first I didn’t believe them, but when I verified it, I knew I was going to enter it.”

He did, and easily beat his competitors.

“I decided I would keep coming back,” he said.

Among Bradstreet’s challengers this July 14 was first-time competitor Trevayne Jackson of Wilton.

“I was expecting I would just drink it, you know chug-a-lug,” Jackson told The Times Record newspaper. “The first can is like ‘Oh boy, oh boy.’ The second can is ‘Ohhhh.’ Then the third can I started gagging, but I kept it down.”

In the end, Bradstreet proved to be the best chugger again.

The Bridgewater man said he does not have to practice at all before the contest, as he drinks Moxie all year long. Bradstreet said he usually is the only Aroostook County resident who enters the event, although he was joined by a Mars Hill man last year.

“Mr. Bradstreet is very determined and has the skill and fortitude (Moxie) to win this hands down for 8 years” said Lisbon Town Manager Diane Barnes.

“We had a fantastic festival again this year …,” she said Tuesday,  adding that she looked forward to seeing Bradstreet and all the other visitors from near and far again next year.

The Moxie champion said he intends to keep competing as long as he can.

“I love it,” Bradstreet said. “And it is a good little vacation for my family. It is a nice little festival. We love it.”

I was mentioning to our board of directors this past week that I got a quarterly report from a large online retailer who will donate a portion of my purchases to a charity I select.
Campaign Corner END_OF_DOCUMENT_TOKEN_TO_BE_REPLACED