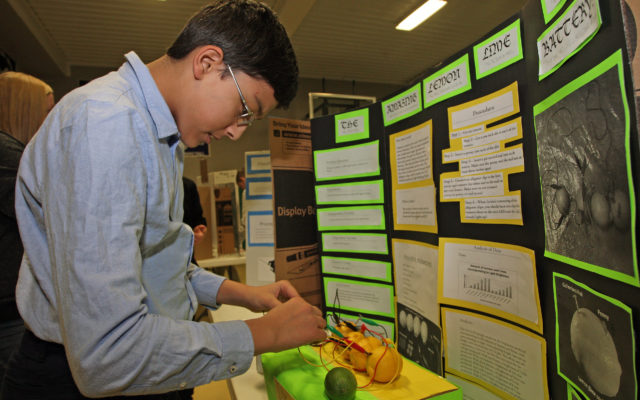 Because GHCA is a Christian school, each student also must include a Biblical verse that somehow connects with their project.

“The students do a fair amount of research before they decide what it is they really want to do,” Zimmerman said. “We encourage those who struggle to come up with an idea by asking them, ‘What is it you wonder about?’ The older you get, it seems the fewer questions you ask, so this is just a great exercise to formulate some thoughts that go beyond the classroom.” 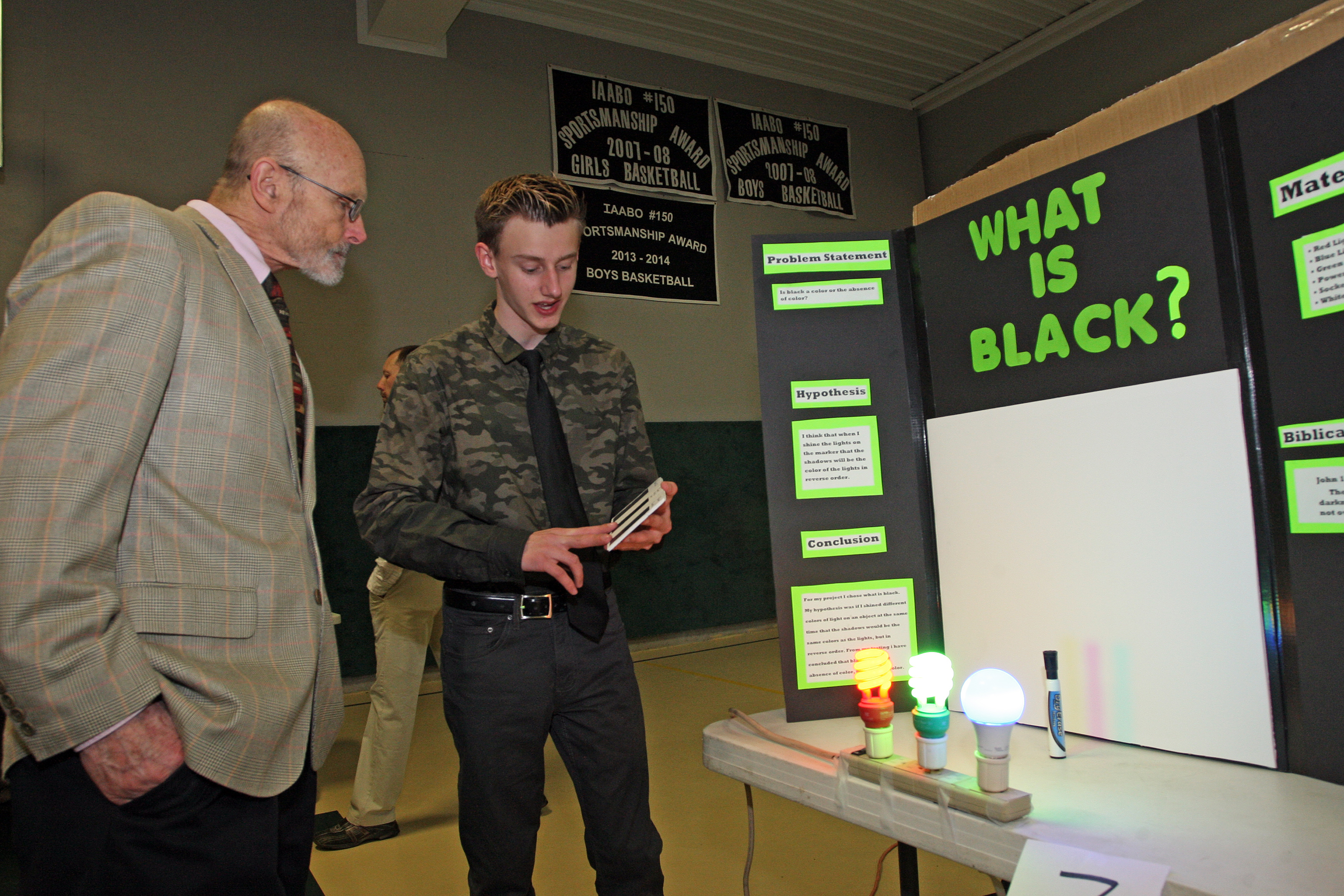 Josh Simoes, right, a sophomore at GHCA, had one of the more colorful displays at the GHCA Science Fair Tuesday, April 9, as he came up with determining whether black was actually a color or the absence of color. Listening to Simoes explain his project is GHCA Headmaster Tom Zimmerman. (Joseph Cyr | Houlton Pioneer Times)

Students were divided into two groups — grades 7-8 and grades 9-10 — for the purpose of judging exhibits at the science fair.

Silas Nadeau, a seventh-grader, based his project on how baking soda and vinegar react chemically to release gas. His display included a balloon affixed to the top of a soda bottle.

“I wanted to see if keeping vinegar constant, while increasing the amount of baking soda would still make a balloon bigger (with gas),” he said. “My conclusion was that it did.”

SinghRanger, also a seventh-grader, based his project on how the acids in lemons and limes can be used to conduct electricity. SinghRanger said his idea was based on finding alternative sources of power.

“My goal was to discover which would power an LED better, a lemon or a lime?” he said. “In the end, I found that lemons powered the device best. This project is environmentally-friendly and easy to make.”

Josh Simoes, a sophomore at GHCA, had one of the more colorful displays as he tried to determine whether black is actually a color or the absence of color. For his project, Simoes had three colored light bulbs (red, green and blue) and placed a marker behind the lights to see what color the shadow would be.

“To test my theory, I took the three wavelenghts of light that make up white light and shined it onto a marker,” he said. “The shadows, surprisingly, were blue, green and red.”

“From this study, I concluded that black is less of a color and not the absence of color,” he said.

Maine is more than eight months into Medicaid expansion under the federal Affordable Care Act and trends around who is enrolling and where they live are starting to emerge, bucking some expectations and pointing out access challenges.
Pets END_OF_DOCUMENT_TOKEN_TO_BE_REPLACED