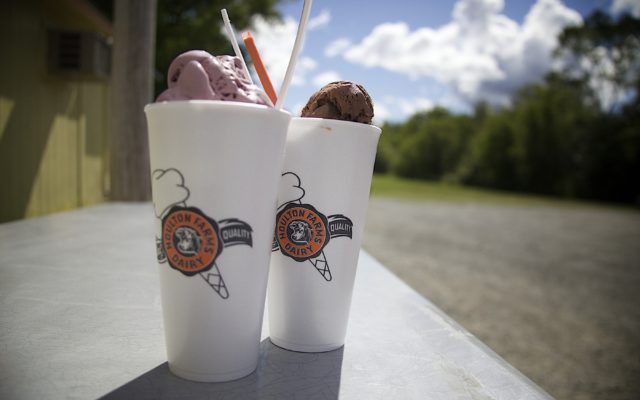 Jen Lynds • May 7, 2019
While recipes for the most popular items at Houlton Farms Dairy bar have remained the same over the years, one thing will have to change in the future -- the packaging for some of its products.

HOULTON, Maine — While recipes for the most popular items at Houlton Farms Dairy bar have remained the same over the years, one thing will have to change in the future — the packaging for some of its products.

On April 30, Gov. Janet Mills signed into law the first statewide foam ban in the country. Beginning Jan. 1, 2021, the law will prohibit the sale of disposable food service containers made in whole or in part by polystyrene — commonly referred to as Styrofoam.

Polystyrene foam is a significant polluter because it never fully degrades and is not recyclable in Maine. Polystyrene breaks down easily in the environment, and pieces of microplastic have been found in shellfish such as scallops, oysters, mussels and clams.

The ban will mean that several County business and organizations will have to make changes.

“We will have to see about going to paper,” she said. “We use styrofoam for the cups and a few of our dishes, too. We also have plastic straws. I haven’t seen any of the prices on anything, so it is hard to tell if this decision is going to force us to raise our own prices.”

David Tucker, owner of TNT Takeout on High Street, said Friday that the decision will push the business in a direction that it was already headed in.

“We are trying to get away from styrofoam, anyway,” he said. “It is not the best product. It makes the buns soggy and it doesn’t really keep the fries hot. We mostly use cardboard products and are looking at different options for packaging now.”

He said that they mainly use styrofoam to serve their milkshakes and that there was a possibility that the ban could drive up the price of milkshakes “10 or 15 cents a unit.”

In Presque Isle, Deborah Gustin, owner of the Irish Setter Pub, said that while her business did not use a lot of styrofoam, the decision by the state would have an impact.

“It is going to drive up the price of some products,” she said Friday. “We use styrofoam mostly for takeout, and we use it because it is cheaper than the biodegradable packaging.”

Gustin acknowledged that the ban likely would drive up the price of something on her menu, but also said that it was “important to take care of the environment.”

Carissa Maurin, director of Environment Maine, was excited about the news.

“Nothing we use for only a few minutes should pollute our rivers and oceans, from the Kennebec River to the Gulf of Maine, for centuries — especially when there are alternatives,” she said.

Members of the Houlton Band of Maliseets will head to the ballot box in order to determine who will be elected as their new tribal chief.
Pets END_OF_DOCUMENT_TOKEN_TO_BE_REPLACED