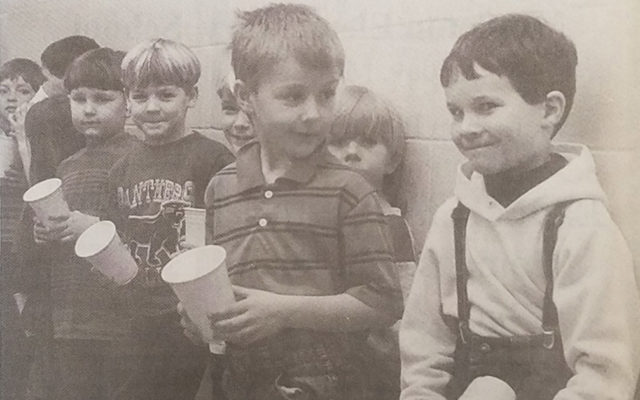 Contributed • May 8, 2019
Splendid work -- Fred P. Loring of Presque Isle High School did a splendid work in agricultural lines and not only did he provide a great stimulus to the Boys’ and Girls’ Clubs but he gave some of his time in helping farmers to special calls.

Splendid work — Fred P. Loring of Presque Isle High School did a splendid work in agricultural lines and not only did he provide a great stimulus to the Boys’ and Girls’ Clubs but he gave some of his time in helping farmers to special calls. He spent an afternoon with Alex McPherson and his son Reid, assisting them in treating 100 bushels of oats for smut. Mr. Loring said that all oats should be treated with formalin for smut, and that he gladly was willing to give his assistance to any farmer desiring to carry out the process. Mr. Loring used a Buick roadster to assist him in his long round of busy duties, especially in looking after the work of the Boys’ and Girls’ Club work.

Gouldville PTA — Over 100 members and guests attended the picnic supper by Gouldville PTA, after which a typical Gouldville Chapel program was presented by pupils of the fourth and fifth grades. Piano solos were given by Boynton Hussey and Nannette Smith. The rhythm band played “The Circus Parade.” Gwendolyn Parker was the announcer. A business meeting followed at which time Robert Tate was elected president for the coming year, Fay Ladner as treasurer, and Mrs. Francis Haskell, secretary.

Beauty projects planned — Beautification was a swinging thing in Presque Isle. A number of projects were underway and others being planned to add eye appeal to the city’s Main Street, according to Lewis E. Libby, chairman of the Beautification Committee. Malcolm Shapiro, a spokesman for the downtown merchants, said that 70 pyramid-shaped evergreen trees and 1,000 petunia plants had been ordered from a Massachusetts firm. Libby said the Presque Isle Garden Club was in the process of planning landscaping of the grounds of the Mark and Emily Turner Library and Thomas Sweetser was forming a committee to instigate a tree replacement program for trees removed under the Dutch Elm program. It was expected that the local Jaycees would assist Sweetser’s committee.

Charitable donation — The United Way of Aroostook donated a $5,000 grant to M and M Ministries of Presque Isle to aid in the assistance of low-income services in the Presque Isle area. The all-volunteer group was developing a small transitional housing project and was looking for a new site for Martha and Mary’s Soup Kitchen. Nita Moser, administrator, accepted the check from United Way executive director Susanne Sandusky, alongside Bob Palmer and Ron Moser from M and M Ministries.

Special award winners — The annual University of Maine at Presque Isle’s Athletic Awards Banquet was held at the Campus Center, with Darren Clukey of Dexter and Michelle Davis of Ellsworth honored as the outstanding male and female athletes to cap the ceremony. Other special award winners included Lynn Hartley of Caribou as the recipient of the Stanley H. Small Coaches’ Award and Kirk Lurvey of Ellsworth as the recipient of the McDonalds Scholarship Award for the second consecutive year. Royal Goheen, director of athletics at UM-Presque Isle introduced the guests, while W. Michael Easton, president of the university, was the guest speaker during the event.

Only one member of Maine’s congressional delegation had come out in favor of impeaching President Donald Trump ahead of House Speaker Nancy Pelosi’s Tuesday announcement that the Democratic-led House of Representatives would begin an impeachment inquiry.
Pets END_OF_DOCUMENT_TOKEN_TO_BE_REPLACED

We think a cat can make for the best pet in the world. To truly love a cat, you must learn to accept them for what they are -- unpredictable and quirky, which is something unique and unlike any other pet.
Campaign Corner END_OF_DOCUMENT_TOKEN_TO_BE_REPLACED