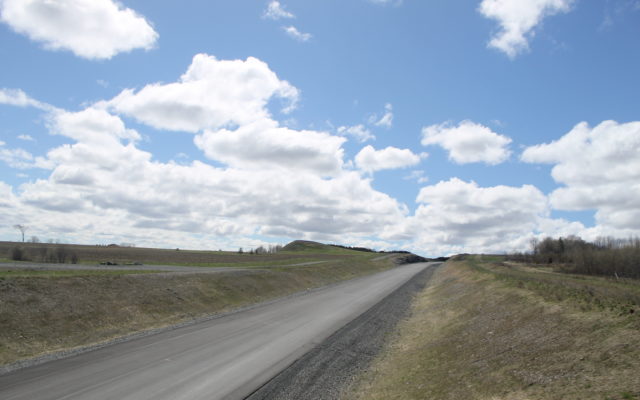 First section of Presque Isle bypass to open in June

Anthony Brino • May 22, 2019
After a final paving, the first 1.7-mile section of the Presque Isle bypass will open in mid-June, according to the Maine Department of Transportation.

PRESQUE ISLE, Maine — After a final paving, the first 1.7-mile section of the Presque Isle bypass will open in mid-June, according to the Maine Department of Transportation.

The opening of the first leg of the bypass comes after more than two decades of proposals and planning on how to best route truck traffic going through Presque Isle to two of Aroostook County’s largest factories, McCain Foods and Huber Engineered Woods in Easton.

Construction on the first section began in the fall of 2016 with Madawaska-based Ed Pelletier & Sons as the contractor. The 1.7-mile section runs from south to north between Conant and Fort Fairfield roads, and came to a total cost of $16.8 million. That includes $4.4 million in property acquisition costs related to 28 parcels that were affected by the section of road, Merrill said.

Six buildings along the route were torn down and four households were relocated, he said.

A second section of the bypass running from the south and spanning 5.9 miles is currently in the design phase, with construction years away and “dependent on the availability of funding,” Merrill said. “I would not venture a guess,” he said of a timeline for construction.

That section is estimated to cost $45.4 million and run from the south end of Presque Isle on Route 1 to Route 10 in Easton. While funding for the second phase has not been fully allocated, the costs for the entire project will ultimately be shared between the federal and state governments, with Maine covering 20 percent.

So far, the Maine DOT has purchased three properties along the area that will be affected by the second phase and relocated three households, Merrill said. He added that it’s too early to say how many property purchases and relocations will come with the second phase.

The route selection is complete but construction design is ongoing, Merrill said. The route will cross several areas of wetlands and streams and include nine bridges.

The agency has received environmental authorizations for the preliminary engineering but “there will be more state and federal environmental hurdles to clear when we go through the permitting process,” Merrill said.

Halfway Home Pet Rescue in Caribou has partnered with the Houlton Humane Society shelter for a cat spay and neuter clinic on Saturday, May 30, and Sunday, May 31, in Houlton.
Campaign Corner END_OF_DOCUMENT_TOKEN_TO_BE_REPLACED