Ted Shapiro, Special to The County • June 29, 2019
As readers of this column know, I am big on weather awareness. In this, the "Age of Apps,” we’ve forgotten to look up.

As readers of this column know, I am big on weather awareness. In this, the “Age of Apps,” we’ve forgotten to look up. And forgetting to look up can be deadly. Let me set the stage. It’s summer in Maine. You’ve had a nice day of backpacking and find a nice, level campsite by a small meandering river at day’s end. As you are settling in for the night, after a good camp-cooked meal, you notice lightning, flickering up in the hills. You figure it might look cool through your tent and indeed it does as you zip in for the night.

But let’s say that your nice, meandering river has its headwaters in those very hills, above which you are seeing the flickering lightning.

If you ever see the scenario I just described, move to higher ground at once. That flickering lightning may in fact be thunderstorms, which could be dumping torrential rain on the river’s headwaters. How quickly can your tranquil river rise? Well, check the chart at the bottom of this column. It is called a hydrograph, and it shows the river height over time. Note the 20-foot vertical rise in the river level around noon on the West Nueces River near Brackettville,Texas, which is about 100 miles west of San Antonio. I could not find reports of damage in this area, but that is the exception, and certainly not the rule in a case such as this. 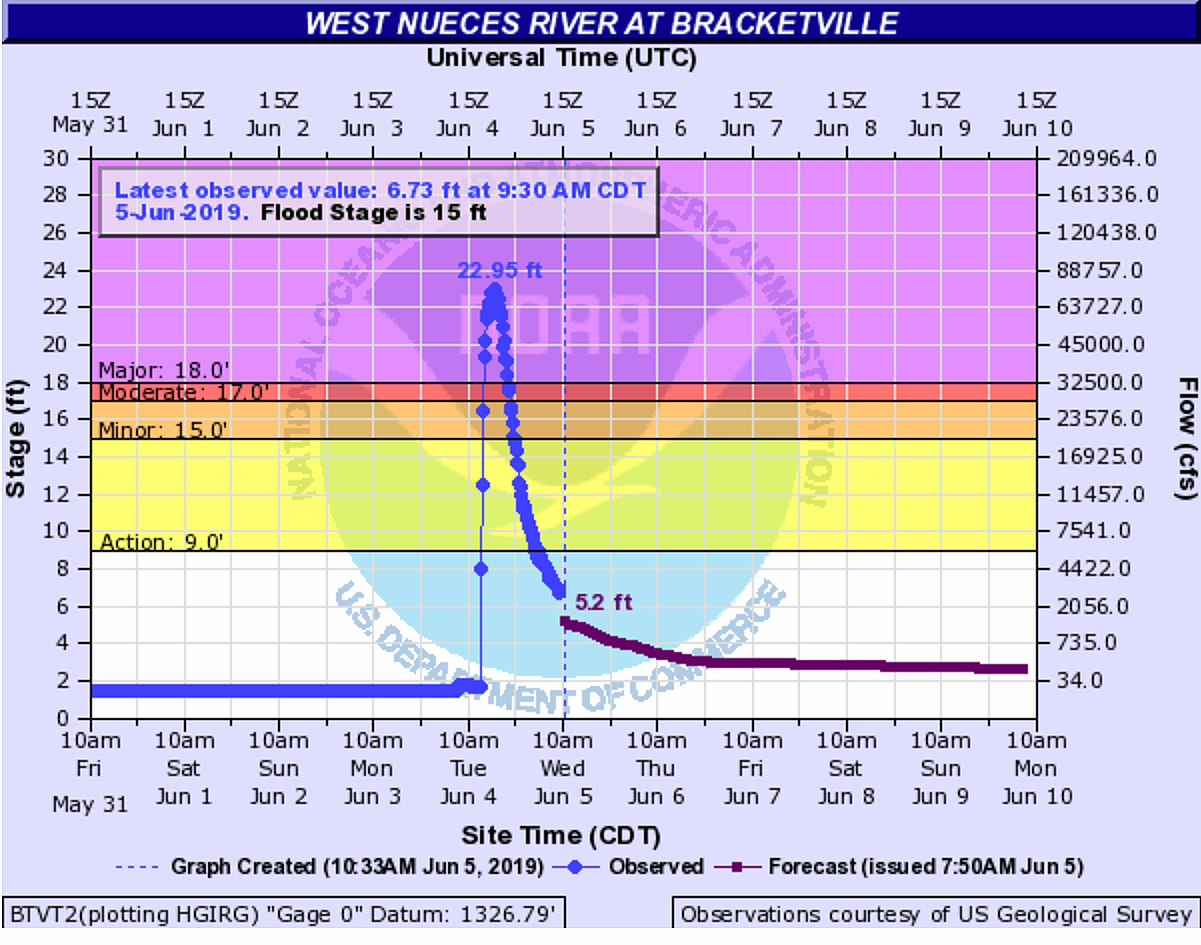 Flash floods bring death and destruction in the blink of an eye. A horrific flash flood claimed the lives of 144 people, camping on a pleasant Saturday evening in Colorado’s Big Thompson Canyon. It was July 31, 1976, and the campgrounds were especially crowded with people celebrating Colorado’s centennial.  While it hardly rained at all where the campers were, up in the mountains, stationary thunderstorms unloaded 12 inches of rain in less than four hours, directly over the headwaters of the Big Thompson River, and again, barely any rain fell where people were camping. Then, at around 9:30 that evening, calamity, as a two-story-high wall of water came roaring down the narrow canyon, sweeping away everything in its path. Little cabins, like the ones on Long Lake, were instantly removed from their foundations, and hurled down the river, with the people inside. The survivors spoke of something that I mentioned earlier: flashes of lighting, up in the hills.

If you ever go camping along the banks of small rivers and streams, you must watch the sky. Know where you are in relation to the terrain around you, elevation-wise. Have an escape plan! Do not rely solely on a forecast you get from your phone. The sky can yield important clues, you must pay attention to them.

A great example of needing to pay attention would be anyone venturing into the slot canyons of the American West. If you were planning to do this, but saw a trend in which cumulus clouds were getting taller, wider, and more sharply-sculpted (like the surface of cauliflower), showers or thunderstorms might be in the offing, and you would want to hold off and watch things for a bit before deciding to descend. Water in slot canyons can rise with shocking speed.

If you are interested in seeing videos of flash floods, there are a ton of them on youtube, including slot canyon flash floods. Here is the URL for an astonishing account of the deadly power of rushing water. It’s worth reading the whole article: https://www.theguardian.com/us-news/2015/sep/15/flash-flooding-utah-arizona-deaths.

Before closing up, and on a different topic, here’s a good tidbit for those who like to keep track of interesting weather stats: I received at least one frost report on three separate June dates, the 7th, the 9th, both in Eagle Lake, and the 18th in Grand Falls, N.B.

The late “first 80” is right in line with our cool spring, and, as a result, gardens got off to a slow start this year.

Ted Shapiro holds the Broadcast Seal of Approval from both the American Meteorological Society and the National Weather Association. An Alexandria, Va. native, he has been chief meteorologist at WAGM-TV since 2006. Email him at tshapiro@wagmtv.com.

For all it does to refresh us, burn energy and keep us sharp, we all need playtime, dogs and cats included. Sharing playtime with pets has the added benefit of strengthening the bond between us, so we better understand one another.
Campaign Corner END_OF_DOCUMENT_TOKEN_TO_BE_REPLACED