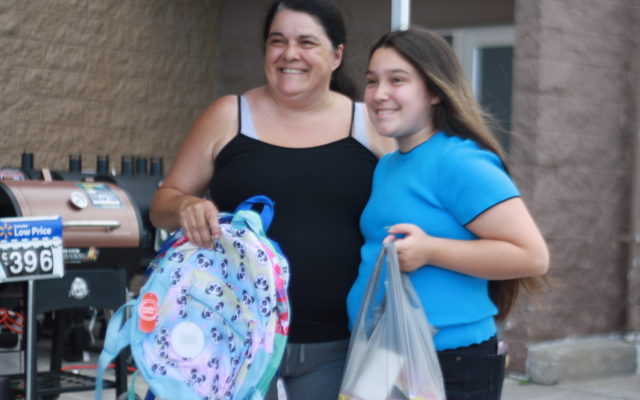 Melissa Lizotte • July 22, 2019
For many families the late summer months are a time when they head to the stores in search of back-to-school supplies. This past week community members stepped up to ensure that more children experience the joy of walking into school with a brand new backpack and other tools they need to succeed.

PRESQUE ISLE, Maine — For many families the late summer months are a time when they head to the stores in search of back-to-school supplies. This past week community members stepped up to ensure that more children experience the joy of walking into school with a brand new backpack and other tools they need to succeed.

Throughout the past decade United Way of Aroostook has annually collected backpacks, school supplies and clothing to give to County families who might not otherwise afford to purchase the new items. Those efforts have grown into the Stuff the Bus events, in which volunteers in Houlton and Presque Isle stop by local Walmart stores and other partnering businesses to help people in their communities.

Locke noted that since the Houlton backpack drive on July 18, she and volunteers had seen around 200 people donate.

“For the past three years the amount of backpacks and supplies we’ve seen donated has continued to grow,” Locke said. “I think for many kids having that new backpack and set of pencils that belongs to them makes them more excited to head back to school.”

Ben Lothrop, the recently appointed principal of Limestone Community School, donated a backpack that he purchased on Friday. He said that as an educator he has seen many families struggle to purchase new school supplies every year and that receiving a new backpack can make all the difference in a child’s self-confidence.

“There are a lot of kids in need in our community and it’s a great feeling to know that people have stepped up to help,” said Lothrop, who is also a member of United Way’s board of directors.

Karen McGregor of Presque Isle and her granddaughter MacKenzie, 10, purchased and donated a new backpack to Stuff the Bus as a way to give back to the community.

“I remember being a young single mother with two children and struggling to buy school supplies every year,” McGregor said. “Now that I’m able to, I’m glad to help out other families.”

Maine is more than eight months into Medicaid expansion under the federal Affordable Care Act and trends around who is enrolling and where they live are starting to emerge, bucking some expectations and pointing out access challenges.
Pets END_OF_DOCUMENT_TOKEN_TO_BE_REPLACED