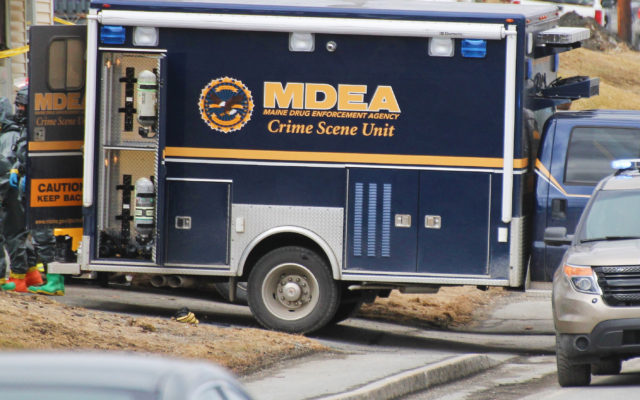 Clayton was not home at the time the search warrant was served, according to the MDEA.

When agents searched the home, they reportedly found a “small amount” of heroin along with two rifles and a .45-caliber handgun, the MDEA stated in the press release. It further detailed that Clayton is prohibited from possessing firearms because she has a prior felony drug conviction. Agents also reportedly found a locked safe at Clayton’s residence, which they weren’t able to open.

Clayton was arrested later in Presque Isle, after the search. She allegedly had a small amount of methamphetamine in her possession at the time of her arrest on July 18.

Clayton was taken to Aroostook County Jail and charged with trafficking in heroin, possession of heroin and methamphetamine, and possession of firearms by a prohibited person. She later made bail and was released.

On Monday, agents served a second search warrant to open the locked safe found in Clayton’s residence the Thursday before. They reportedly found more than 350 grams of heroin and a 9-millimeter handgun.

The MDEA said that more than $70,000 worth of heroin was seized during the investigation.

Clayton was then arrested for a second time and charged with aggravated trafficking in heroin, which is a Class A offense.

“The aggravating factors include Clayton’s previous felony drug conviction, the presence of firearms with the drugs and the quantity of drugs involved,” according to the MDEA.

A Class A felony is punishable by up to 30 years in prison.

Gubernatorial candidate John Glowa said that he wants to spur government reform that truly creates a system of, by and for the people when he visited Presque Isle City Hall.
Pets END_OF_DOCUMENT_TOKEN_TO_BE_REPLACED

Many of you have been asking about our super popular “Toast to the Animals” celebration. After several COVID-19 cancellations and not being able to host this great fundraiser, we are finally ready to celebrate the animals once again and help support the Central Aroostook Humane Society.
What's Happening This Week END_OF_DOCUMENT_TOKEN_TO_BE_REPLACED