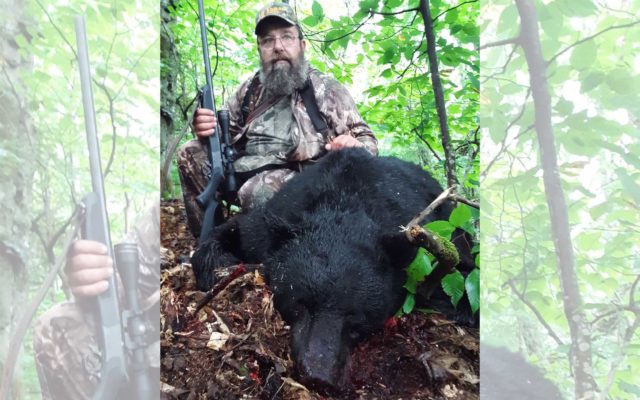 Anthony Brino • September 6, 2019
With an abundance of berries, beech nuts and other wild food this year, northern Maine hunters may have to work harder to attract or track down bears.

PRESQUE ISLE, Maine — With an abundance of berries, beech nuts and other wild food this year, northern Maine hunters may have to work harder to attract or track down bears.

Each year, the Maine Department of Inland Fisheries & Wildlife sells approximately 10,000 bear hunting permits — about half to out-of-state residents — and last year hunters took 3,314 bears statewide, about 14 percent more than the harvests in 2017 and 2016.

More than 1,200 bears were harvested last year in the seven wildlife management districts that span Aroostook County, according to the 2018 bear harvest report.

“This year, we expect to have a lower harvest than last year,” said Jennifer Vashon an IF&W biologist who studies black bears and Canada lynx.

“Last year, on the flip side, was a poor natural food year,” partly due to the drought, she added. “Moisture plays a huge role.”

Still, the bear hunt remains popular and is an important time for guiding and lodge businesses in northern Maine. It kicks off the fall hunting season, ahead of the moose and bird hunts that start in late September.

Vashon said that bear hunters who are stalking might be more successful later in the season this fall, particularly in woodlands with beech trees where bears might be searching for nuts.

“Bears won’t be denning until late November or early December,” she said. “If you have an early snow in early November, they haven’t entered the den and you can get good tracking conditions.”

Maine’s black bears live on average approximately 30 years, and their numbers have been growing statewide by two to four percent, Vashon said.

Vashon is part of a team that monitors bear populations at sites around the state, including one in Ashland, where 30 females are tracked with radio collars.

“Reproductive rates are pretty similar year-to-year,” she said. Female bears start to breed when they’re around 200 pounds, which in central Maine happens around age 4 and in northern Maine closer to age 6, she said.

“As you move north, you see females produce their first litter a little later,” but all around the state between 60 and 75 percent of cubs survive each winter. “That’s why bear populations can grow quite quickly.”

Looking past hunting season, Vashon recommends that homeowners be sure to keep garbage, bird food and other potential attractants inside, especially during the spring.

“The towns that border the large woodlands will often see bears show up in the spring, particularly after a poor food year,” Vashon said. “Once a bear gets easy access to food, it’s going to keep coming back. Keep the bears where they belong in the woods.”

Maine is more than eight months into Medicaid expansion under the federal Affordable Care Act and trends around who is enrolling and where they live are starting to emerge, bucking some expectations and pointing out access challenges.
Pets END_OF_DOCUMENT_TOKEN_TO_BE_REPLACED