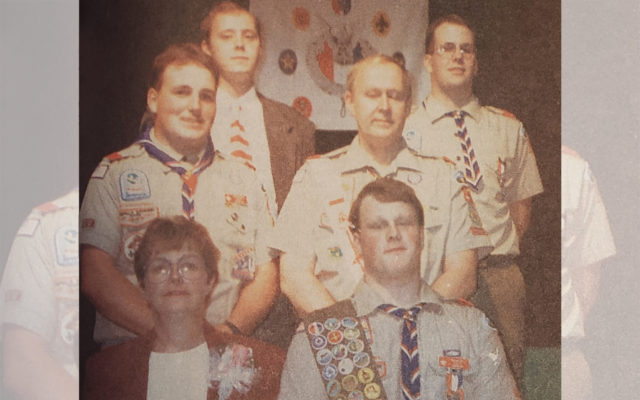 Compiled by Yvonne Tardie, Special to The County • September 30, 2019
The entertainment given under the direction of Mr. and Mrs. Rodenbaugh for the benefit of the Red Cross drew two very large houses in Presque Isle Opera House and scored a great financial success.

Red Cross play — The entertainment given under the direction of Mr. and Mrs. Rodenbaugh for the benefit of the Red Cross drew two very large houses in Presque Isle Opera House and scored a great financial success.

The sum of around $475 was cleared for the Red Cross local chapter and it must be said that all who took part giving of their time most generously were deserving of praise for applying themselves so diligently and acceptably. Two weeks was a short time to prepare so much and it required much close attention. The children’s scenes were beautiful and the closing Grand Army scene and finale was excellent. There was considerable talent exhibited throughout and all have the thanks due them.

Ritchie’s Market new Presque Isle concern — The former Beaulieu’s I.G.A. market on the corner of Chapman and Main Streets was under new management and operated by Richard L. Pelletier of this city. The concern known as Ritchie’s Market. The new owner was employed by the National Biscuit Company for nine years and was affiliated with the Maine Potato Growers, Inc., prior to having purchased the store from Edmund Beaulieu.

Guerette awarded Bronze Star  — Private First Class Reno L. Guerette of Presque Isle, was awarded the Bronze Star for heroic achievement in action with the 88th Infantry Division on the Fifth Army front in Italy. Pfc. Guerette, son of Mr. and Mrs. Peter Guerette, was wounded in action in the Italian sector.

PIHS faculty member named principal at Washburn High — Presque Isle High School’s vocational guidance counselor, Dana Hews, became principal of Washburn High School. He replaced Carleton Barnes, who was named SAD 45 superintendent when William C. Foster left the position. Hews’ resignation was accepted “with regret” by the SAD 1 Board of Directors during their regular monthly meeting. The members approved the appointment of Milton Barnes of Portland to fill the position which Hews left. Barnes, who had a master’s degree in education and 19 years experience, received a salary of $11,978.

Richard led UMPI runners at Boston meet — Sara Richard of Presque Isle ran to an eighth-place finish to lead the University of Maine at Presque isle women’s cross-country team at the Codfish Bowl in Boston. The UM-Presque Isle team finished seventh out of 18 teams competing. Richard had a time of 18:47, only 18 seconds off the winning pace set by Sarah Stuckey of Trinity College. More than 150 women participated in the event. Bowdoin College was the winning team.

At the Houlton Humane Society, we take adopting the cats and dogs in our charge very seriously.
Campaign Corner END_OF_DOCUMENT_TOKEN_TO_BE_REPLACED