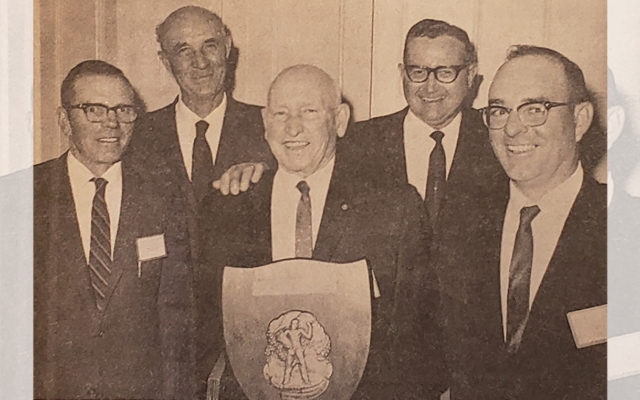 Compiled by Yvonne Tardie, Special to The County • December 17, 2019
101 Years Ago - Dec. 19, 1918 Elected the Village Councillor -- Mr. E.L. Osborne, formerly one of our esteemed citizens, but for some years past a resident of Holden, Alberta, was evidently appreciated in his new home, having been elected one of the Village Councillors.

In commenting on the Board the Holden Herald said: “These three councillors should form a strong combination, and it only remained for the taxes to flow in to give them working capital to make needed public improvements.”

Washburn man awarded good conduct medal — An Eighth Air Force Fighter Station, England — The Good  Conduct Medal was awarded to Technician 5th grade Herman O. Pelkey of Washburn, for exemplary behavior, efficiency, and faithful performance of duty. Tec. 5 Pelkey was a firefighter in the fire-fighting platoon assigned to the 56th Fighter Group, highest-scoring P-47 Thunderbolt Group in the 8th Air Force. He was a member of a fire-fighting and crash truck which was stationed on the field, while the airplanes took off and landed. The platoon also fought all fires on the station. Prior to entering the service, he was a truck driver employed by his father in dairy farming. His parents, Mr. and Mrs. Oren Pelkey, resided in Washburn.

Registration exceeded 12,000 — More than $80,000 in snowmobile fees had been collected since the new office in the State Office Building opened in October, according to Lorenzo J. Gaudreau, office manager, Maine Department of Inland Fisheries and Game. To date, 6,587 machines had been registered, 280 dealers, there had been 77 transfers and nine duplicates issued, he said. Total registration was just over 12,000 including about 6,000 registered by the Motor Vehicle Registration Bureau before that particular office came into being.

Charitable donation — The International Paper Company Foundation donated $350 to SAD 1 for the purchase of protective tarps for both vegetable and strawberry crops. The donation was designed to encourage volunteerism by IP employees in non-profit organizations within their community ans was made in recognition of the volunteer effort put forth by IP employee Wendell Soucier. Future Farmers of America president Gene Winslow accepted the check from Soucier in the presence of Don Jordan, acting director for the vocational program at PIHS, Elizabeth Morgan, agriculture-science instructor, and superintendent Gehrig Johnsn.

Easton’s Kimball received USM scholar-athletic award — The University of Southern Maine athletic department named its William Wise Scholar-Athlete Award winner for the 1993-94 school year. Forty student athletes representing 12 varsity sports received the honor in the seventh year of the award’s existence. 227 athletes had received the award. The 4o recipients for the 1993-94 year matched the 1991-92 total as the largest number of award winners in a school year. The awards are named after retired USM administrator William B. Wise, who remained a strong supporter of Husky athletics. Thed awards are given to those full-time students who maintain a 3.0 or better grade point average for the academic year and are members of at least one athletic team.

Halfway Home Pet Rescue in Caribou has partnered with the Houlton Humane Society shelter for a cat spay and neuter clinic on Saturday, May 30, and Sunday, May 31, in Houlton.
Campaign Corner END_OF_DOCUMENT_TOKEN_TO_BE_REPLACED