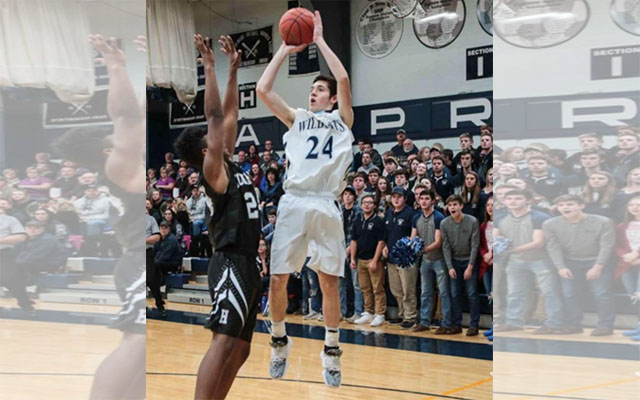 Contributed • March 10, 2020
The University of Maine at Presque Isle is proud to announce the commitment of local basketball standout Caleb Wheaton, a current senior at Presque Isle High School, who will continue his education and basketball career at UMPI.

Wheaton, a three-year varsity player for the Wildcats, became the focal point of PIHS offense this season, as he averaged 17 points per game despite seeing multiple defenses thrown his way in efforts to slow him and the Wildcats down.  Among his accomplishments were his performances against two-time state champions Caribou High School, where in two contests Wheaton averaged 29.5 points per game, including a 38-point outburst at Caribou on Jan. 8 in front of a sold-out gym.  Wheaton’s play earned him 2nd Team All-Big East honors.

“We are excited to have Caleb joining us.  He is an absolute gym rat that can light it up from the perimeter.  His hard work throughout his high school career shows as he got better each year and we are excited to add a player with his work ethic and shooting ability to our program,” said Dan Kane, UMPI head men’s basketball coach.

Wheaton is no stranger to the UMPI program, as he will be joining former teammate Griffin Guerrette. Guerrette is having another stellar year for the Owls as a sophomore, after gaining North Atlantic Conference Rookie of the Year in his first season, as well as being selected to the state of Maine All-Rookie team by the Maine Basketball Coaches and Writers Association.

“I’m excited to play in front of my family and friends more. After watching some of UMPI’s games I think it will be a great experience to play with the team and for Coach Kane,” Wheaton said. “It will be great to be on the same team as Griffin, Nick and some of my other friends on the team, while getting to know the other players.”

Wheaton also played for long-time head coach and UMPI Athletics Hall of Famer Terry Cummings, who still holds the UMPI men’s basketball program record for most points in a career.

“As an UMPI alumni and former coach of the Owls, I couldn’t be more pleased with Caleb’s decision to attend UMPI.  I try to tell my guys to always keep an open mind about staying home and attending UMPI,” Cummings said. “Caleb is the type of player that is going to give you everything he has on the floor.”

Over the last three seasons the UMPI men’s basketball program has grown in numbers and talent and has proven to be competitive against all of their conference opponents.  During that time the Owls have advanced to the conference playoffs and this past season advanced to the NAC semifinals after defeating Thomas College in the quarterfinals.

“Caleb is another great addition in our quest for our first-ever North Atlantic Conference championship,” said Kane.  “At UMPI the men’s basketball program and all of athletics is dedicated to making UMPI a place where the top players from the county can continue their athletic careers while also receiving a great education.  With a mixture of some of the top county and Maine players and players from out of state, we strongly believe we can bring a conference title back to The County.”

Many of you have been following Luke's story on our Facebook page. Luke came to the Ark last July with his sister Lydia at 8 weeks old. Both Luke and Lydia were in really bad shape with untreated upper respiratory infection.
Campaign Corner END_OF_DOCUMENT_TOKEN_TO_BE_REPLACED