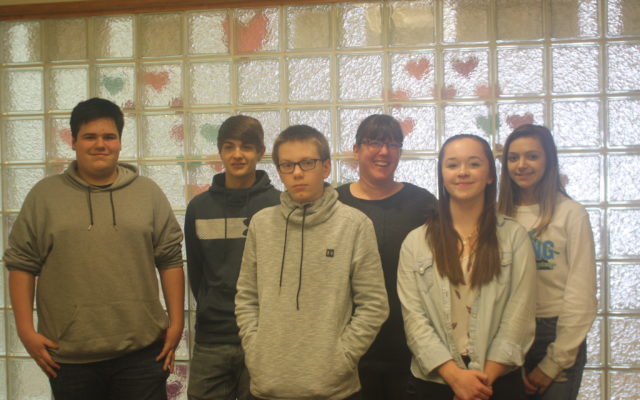 David Marino Jr. • March 18, 2020
In June, seven high school students from Ashland District School will get the chance to experience an entirely different world in a week-long trip to Costa Rica. And even amongst fears about COVID-19, the school has no plans to halt what it sees as a once-in-a-lifetime opportunity.

ASHLAND, Maine — The Latin American nation of Costa Rica is nearly 5,000 miles from The County. Densely populated and famous for its tropical climate and sloth sanctuaries, it is about as different as can be from the rural woods of Ashland.

In June, seven high school students from Ashland District School will get the chance to experience an entirely different world in a week-long trip to Costa Rica. And even amongst fears about COVID-19, the school has no plans to halt what it sees as a once-in-a-lifetime opportunity.

The journey is the brainchild of Ashland science teacher Amanda Barker, one of two chaperones accompanying students on the trip. Barker was drawn to the country by its potential for hands-on science learning, and there will undoubtedly be a lot of it available.

On the trip, which will take place from June 22-28, students will get the chance to zipline in the Monteverde Cloud Forest Reserve, visit the Arenal Volcano National Park, which contains the active Arenal Volcano, and see animals at a wildlife sanctuary.

For Barker, it is a valuable opportunity for the students, many of whom have never left the country before.

“We talked about maybe going to Florida or something like that,” Barker said. “But one of the things that came up in the group was, ‘well jeez, we can probably go to Florida at some point in our lives. But when can we go out of the country?”’

Barker said the trip was still on as of Monday, March 16, despite fears about international travel related to the COVID-19 pandemic. As of March 16, there are 35 confirmed cases of the virus within Costa Rica.

She hopes that by June, with the flu season over, current fears about infection will decrease. She said the school would undoubtedly cancel the trip if there was a threat to students.

“We’re not going to go somewhere if it is not safe for us as far as coronavirus goes,” Barker said. “But, if it looks like it’s something that is still a viable thing to do in June, then we’ll go and we’ll do it.”

Though she left the door open for it being rescheduled, Barker hoped that the trip would be able to go through at its allotted time, especially given the immense amount of work students had put into raising funds for the effort.

She said several students had worked concessions during sporting events and performed school fundraisers to pay for a significant amount of the trip.

Several of the students traveling said they were excited to see a new country in a different region of the world that was very different from their upbringing in Ashland.

Junior Alden Routhier mowed lawns around Ashland to help pay for his ticket. And he’s already purchased his wardrobe for the trip: multiple tropical print shirts.

“I got some flowers on it, some palm trees,” Routhier said. “We’re all set.”

Kylee Bolstridge said she was looking forward to the food, and trying to use her two years of Spanish to communicate with locals.

Bolstridge plans to broadcast part of her trip on the video-sharing service TikTok, an app in which users create and publish short videos. One of her videos, already developed in her head, would juxtapose the Ashland winter with tropical Costa Rica.

“There’s this trend where you sneeze outside in the cold, but then you end up in the warm Costa Rican weather,” Bolstridge said. “And you just, like, dance.”

Though optional international trips have become somewhat ubiquitous at American high schools, it is usually not without some worry from parents. Sending their children off to a far-off land without parental supervision is terrifying to many.

Sophomore Mia Carney said her parents were “nervous” about the trip, as it is a different county thousands of miles away. She said they were reassured that she was going with her school.

Carney was drawn to the trip because of a love of traveling, and an interest in seeing many of the different animals that Costa Rica has to offer. She was looking forward to the opportunity to learn more about Costa Rica up close.

“It’s always better to see it or experience it than to read about it,” Carney said.