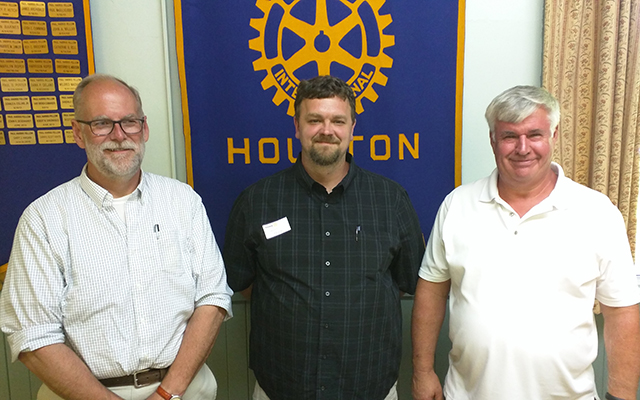 Rotarians take a walk through history

Gartley opened the slide show with the website of The Maine Memory Network that has an address of achm.mainememory.net. Their site has side tabs of Aroostook Historical and Art Museum facts, Contact AHAM, Ricker Room, W. B. White Collection, Sarah Houlton Kitchen and Houlton POW Camp. The forum “My Maine Stories” will be coming to Houlton on Aug. 29, to record 10 minute stories of Maine by local storytellers.

Gartley next introduced the Houlton Museum’s website (houltonmuseum.wixsite.com/acham) that has a homepage with several tabs to enlighten one on various subjects, such as “Our Collection” consisting of Ricker Room, Military Room, Sarah Houlton Kitchen, Edward B. White Collection and the Houlton Army Air Base/Houtlon POW Camp. Also, the tab “Houlton History” shares various topics such as Titcomb Mill Boiler Explosion that was written about in the Aroostook Times on Friday, March 9,1906.

Howe shared the story of the Ensign Animal Fountain that is located in downtown Houlton at the corner of Market Square and Water Street. Hermon Ensign made a fortune in the late 19th century and in 1897 founded the National Humane Alliance that was the precursor the Humane Society. The Alliance began to focus on offering animal drinking fountains or troughs to communities all over the country and Houlton was a recipient of one. The fountain was manufactured in granite from Vinalhaven and had bronze lions as the spout along with a plaque commemorating the Alliance and Houlton’s was originally set in front of the Snell House on Market Square.

Gartley shared information on his post card collection and the connections that project has created. Placing these images on the website has led to new information on old history. One such story is about the Houlton Bus Company that actually served the servicemen to shuttle them back and forth from the base to downtown.

The video link tab has walking tours by John Millar, old homes, footage from the air base, as well as the Wording Hall Fire in 1944, the Putnam Clip and views of the Elm trees on Court Street.

The website is a work in progress and a great resource. The hours of the museum at 109 Main St. in Houlton in the Historic White Memorial Building are Tuesday through Friday from 1 to 4 p.m. in the afternoon and Saturdays from 9 a.m. to 1 p.m.

Next year's Caribou City Council will include a new member and a longtime councilor thanks to Tuesday's election.
Pets END_OF_DOCUMENT_TOKEN_TO_BE_REPLACED

Everyone who enjoys the company of a dog knows that sometimes dogs have strange behaviors.  They may arrive in your life with the behaviors already in place, or perhaps they are adopted as a puppy and develop a behavior young.
What's Happening This Week END_OF_DOCUMENT_TOKEN_TO_BE_REPLACED