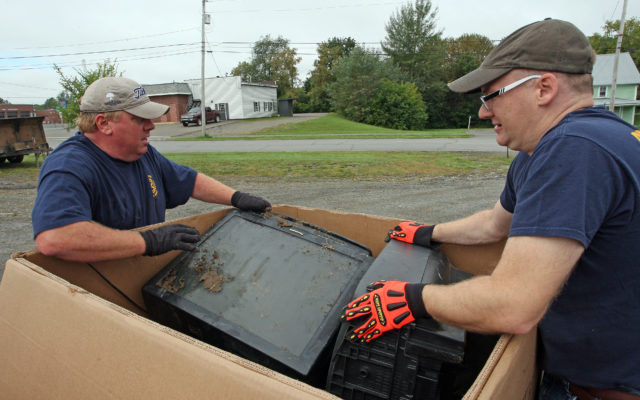 Joseph Cyr • September 14, 2017
Houlton Rotarians were not sure what to expect at Saturday’s “E-Waste Recycling Day.”

HOULTON, Maine — Houlton Rotarians were not sure what to expect at Saturday’s “E-Waste Recycling Day.”

After all, the club had collected just over 60,000 pounds of electronic waste a year ago.

“We wondered how this town could meet or exceed last year,” said Rotarian Mac Randolph. “I mean how much more e-waste could be left? Wow, were we surprised. I was kind of worried that, after last year, we would have a smaller turnout, but we had our first car sitting here waiting for us at 7:30 a.m. and we didn’t officially start until 9.” 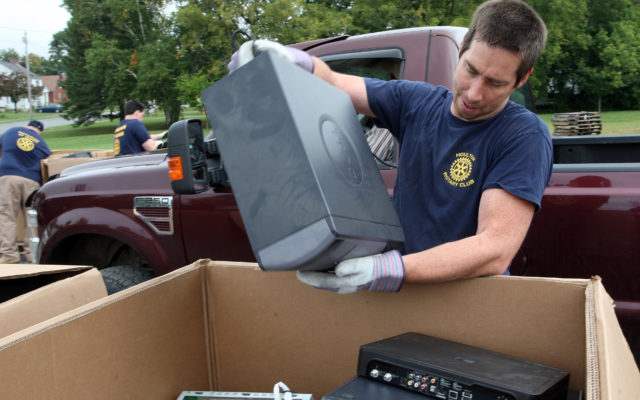 This year’s event shattered those figures, Randolph said. While he has yet to get official numbers from Electronics End, an E-waste recycling company based out of Brewer, the Rotarian said it was estimated that the Houlton event generated about 80,000 pounds of material, filling nearly 200 pallets.

“Electronics are the biggest segment of waste in landfills today,” Randolph said. “It’s amazing that a ton of circuit boards will produce more gold and silver and palladium than a ton of ore. All of this stuff is chewed up, and recycled. All of it is getting reused and that also means it is not going into the ground.”

Donations also were up this year. Those disposing of materials were asked to give a donation to the Rotary Club to assist with the program expenses. This year, residents donated about $4,000. Sponsorships from local businesses also were up, Randolph said, which is a testament to how strongly people feel about properly disposing of electronic waste.

“To say the least, this was an awesome event,” Randolph said. “It was very well organized and an overwhelming success.”

Members of the Houlton Rotary Club donated their time for the Saturday event. They also were joined by others from the community who simply wanted to volunteer, Randolph said.

The group already is working on plans for a third event next fall, possibly extending their efforts to provide pick-up service for the elderly or those too ill to bring their electronic waste to the collection site.