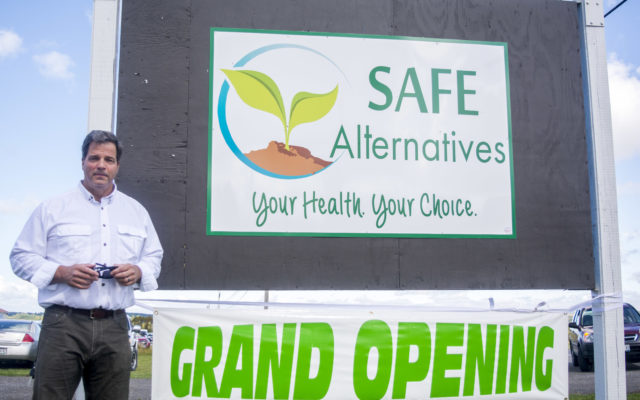 More than 100 potential customers visited the new medical marijuana dispensary to ask questions about the products and possibly apply for the card that could give them permission to buy medicinal pot in Maine.

While the Caribou facility’s grand opening was just that weekend, owner Leo Trudel has owned Safe Alternatives for seven years. He first opened a grow operation in Frenchville in 2010, but issues with regulations and being accepted in the community caused Trudel to relocate the growing operation to Eagle Lake in 2013. From there medicinal pot was being dispensed to customers around The County until June when the dispensary was opened in Caribou.

Now, the Eagle Lake location is strictly used to grow and cultivate medicinal marijuana while the Caribou location is Safe Alternative’s only dispensary. The central Aroostook shop currently has six employees, while “two or three” people work at the Eagle Lake facility, according to Trudel.

When he’s not running Safe Alternatives, Trudel teaches business courses at the University of Maine at Fort Kent.

“My specialty is in finance and my doctoral dissertation is on developing farms in the state of Maine,” Trudel said.

Trudel developed a business plan for a dispensary years ago, but was on the fence about moving forward until he attended a conference on medical marijuana.

“It wasn’t until I went to a conference where I got to see people who had true ailments who were using this to alleviate pain,” Trudel said. “This was their go to. That was what pushed me over the edge in order to jump into this. Most think it’s money, but we’re a non-profit, and have not profited from the business.”

Trudel said his was a grassroots effort “where we ended up creating a board, wrote a licensing request for proposal and were fortunate enough to get it.”

The decision to move to Caribou, according to Trudel, was inspired by seeing that there was a need in the area. Several customers already were based in the central aroostook area.

While the marijuana is sold in Caribou, the facility in Eagle Lake where it is grown, also contains a kitchen where edibles, tinctures, capsules, and salves are created.

On the municipal side, Trudel says the reaction from Caribou has been “neutral,” and attributes that to long-held stigmas associated with marijuana.

“People say it’s a gateway drug that’s going to lead to everything else,” Trudel said, “but let’s face it, breast milk could be considered a gateway drug to a lot of other drugs. In addition, it’s said that it’s worse than alcohol, but if you actually do the research you find that no one has ever died from marijuana.”

Trudel said that through the war on drugs and marketing like the, “This is your brain on drugs,” ad campaign, a phobia has been ingrained in a large part of culture.

“It’s very good marketing,” Trudel said. “It sticks, and it’s hard to get that out of people. At the same time what I can say is that I’ve seen people come into the shop who were, at one point, dead set against it. They’ll say their pain was a seven and now it’s a four, which gets [the word] out and encourages other people to give it a shot.”
Trudel encourages patients to “do their own research” to determine what works best for their ailments. He said that while marijuana won’t work as a treatment for every single person, it could be a viable alternative to addictive opiates. If a current prescription is not working for patients, they should consider trying medical marijuana, he said.

The dispensary also offers cannabidiol, or CBD, one of over 100 active cannabinoids in marijuana which does not produce any intoxicating effects and can be consumed via capsule or tincture if preferred.

While the dispensary only offers medical marijuana, Trudel said he would be open to offering recreational cannabis, though he acknowledged the downside of doing so.

“In order to grow recreationally,” Trudel said, “you’re going to have a fair amount of Budweisers and Coronas; it would be no different than big beer companies. They develop a model where they produce as much as possible in a confined plant to maximize profitability. While that might work with cheap beer and cheap cannabis, it won’t work with specific strains that work for specific ailments. As a result, those strains wouldn’t be produced nearly as much. If you go the recreational route, you’d see a lot of those strains literally dying on the vine.”

Nevertheless, Trudel said that “it makes sense to expand to recreational,” as a business in the marijuana industry.

“Not only is it a component of the business,” Trudel said, “but one has the ability to subsidize the other.”

Safe Alternatives has a board of directors consisting of seven members, including politicians, two members who hold PhDs (aside from Trudel), a retired state trooper, a financial analyst, and another member who also works in the marijuana industry.

Because marijuana is not legal on a federal level, Safe Alternatives is not eligible for 501c3 status, however the business is registered as a non-profit at the state level.

“Everything goes right back in the dispensary,” Trudel said. “It doesn’t come for free, and who knows what’s going to happen with recreational. The governor has made recommendations to do away with medical and have it fold in on itself. There are a number of problems the state can’t see because they don’t have enough insight into the industry.”

For the time being, business is going well for Safe Alternatives, and Trudel said the packed grand opening served as a great opportunity for patients and visitors to discuss their experiences with one another.
“They got the opportunity to sit down with other patients and tell their story,” Trudel said. “If you’re at your wits end because you don’t want to be on opioids, or medicines prescribed to you have negative effects, then this is a great way for people to sit down and start opening safe, alternative doors.”

Only one member of Maine’s congressional delegation had come out in favor of impeaching President Donald Trump ahead of House Speaker Nancy Pelosi’s Tuesday announcement that the Democratic-led House of Representatives would begin an impeachment inquiry.
Pets END_OF_DOCUMENT_TOKEN_TO_BE_REPLACED

We think a cat can make for the best pet in the world. To truly love a cat, you must learn to accept them for what they are -- unpredictable and quirky, which is something unique and unlike any other pet.
Campaign Corner END_OF_DOCUMENT_TOKEN_TO_BE_REPLACED