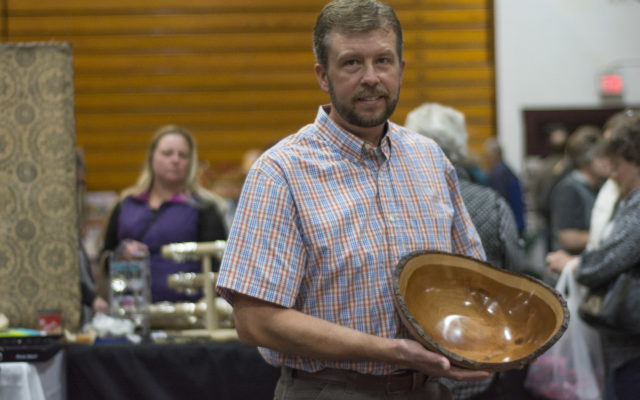 Chris Bouchard • October 25, 2017
A display-only art show held 44 years ago at the Caribou Armory was the catalyst for the city’s Arts & Crafts Fair, which is now The County’s largest. 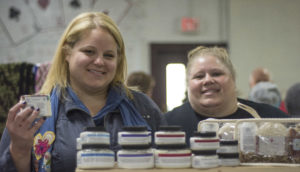 Andrea, left, and Jessica Chasse, who have been creating homemade soaps, lotions, and scrubs via their business Sud-Z Creations for six years, sell some of their products Saturday during Caribou’s 44th annual Arts and Crafts Fair at Caribou High School. (Christopher Bouchard | Aroostook Republican)

CARIBOU, Maine — A display-only art show held 44 years ago at the Caribou Armory was the catalyst for the city’s Arts & Crafts Fair, which is now The County’s largest.

The reception from the first event was so overwhelmingly positive that local artisans decided to sell their creations at the next show. After a handful of events at the armory, the fair moved to Caribou High School, where it is held annually to this day.

In its current incarnation, the event is so popular that attendants often have a tough time finding a parking spot if they don’t head out early.

Caribou Marketing and Events Coordinator Christina Kane-Gibson said Saturday that people flooded through the doors as soon as they opened the event to the public at 10 a.m.

Kane-Gibson, who organized the Arts & Crafts Fair for the first time this year, said members of the community did an excellent job helping her orchestrate the two-day event. 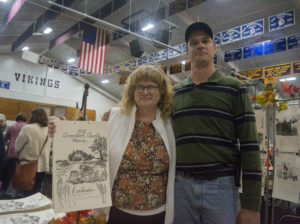 Betheny Anderson and her son Whitney Smith sell hand-crafted calendars and painted barrels on Saturday during Caribou’s 44th annual Arts & Crafts Fair at the city’s high school. Anderson has attended all 44 crafts fairs in the city, and says Caribou has done an excellent job maintaining the event through the years. (Christopher Bouchard | Aroostook Republican)

“We’re not really reinventing the wheel,” Kane-Gibson said. “This has been going on for 43 years without me. I feel like I’m just a piece of the puzzle. The crafters and vendors are awesome, and the high school staff has it down in terms of where the booths go. They know exactly what to do.”

In addition to coordinating the Oct. 21-22 event layout, Kane-Gibson placed signs throughout Caribou and advertised with local media to build up hype for the crafts fair.

While this was Kane-Gibson’s first, Betheny Anderson has been to all 44 Caribou Crafts fairs to date.

Anderson said Saturday that her parents, Martha and Asher Chambers, were part of the group responsible for starting the crafts fair, and that she originally attended to help them sell their crafts, which included homemade jewelry.

Anderson would later work for a small County newspaper called the “Aroostook County Rogue,” which took its name from the act of roguing a field, or picking out blighted or rotten crops.

“After the paper folded due to expenses,” Anderson said. “I asked what was going on in Aroostook every month, and I made 100 calendars with a printer and sold them at a crafts fair [in the early 1980s].”

Anderson said the calendars, which include her own hand-drawn art, were sold out within a day, and that this will be her 37th year of selling calendars at the fair.

She added that the Arts and Crafts fair is “one of the city’s biggest economic drivers.”

Kane-Gibson said the city collects a booth fee that gets “rolled back into the event” and used for promotion, advertising, and signage. Vendors pay $68 for a cafeteria spot and $78 to be in the gym. 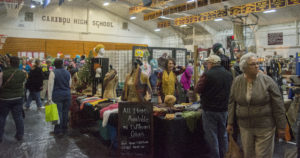 She added that, with “fair attendees from across Aroostook County, Canada, and downstate,” area businesses saw a boost in traffic last weekend.

“I spoke to Russell’s hotel owner and she was full for the weekend,” said Gibson, adding that several restaurant owners also told her they saw “increased numbers and waits.”

Anderson said that Kane-Gibson is bringing a “whole new level of professionalism” to the event.

Having attended every crafts fair held in the city, Anderson has seen numerous changes since the first event.

“The hours have settled down,” Anderson said. “They’ve made many experiments that didn’t work. They allowed people to do things like cook foods that smoked up some of the crafts. They let people run home at 2 p.m if they didn’t sell anything, and then people would come after work at 5 p.m. to buy something only to find that that person had gone back home with their stuff. So they settled on rules that were acceptable for both crafters and customers.” 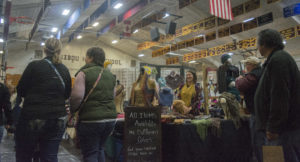 Among the 130 artisans and hundreds of guests occupying the high school’s gym and cafeteria over the weekend were Andrea and Jessica Chasse and Jeffrey Morneault, who respectively create soaps and homemade wooden bowls.

Andrea Chasse said she and Jessica make all of their products from home, and that while it takes about an hour to prepare a batch of soap, which contains roughly 16 bars, the curing process lasts anywhere from four to six weeks.

“My mom has allergies, so we were trying to figure out different ways [to help],” Chasse said. “We started making and selling soap, and one thing led to another and it branched from soap to lotions, to scrubs.”

The Chasses have owned and operated Sud-Z Creations for six years, and say the craft fair is always a great experience for them.

Morneault, who has been making wooden bowls, bats, pens, and wine stoppers for 16 years, also spoke highly of the craft fair experience.

“The reception is really good,” Morneault said, adding that staff were great with helping him set up his booth.

“The reason I’ve been working at this since such a young age is because I was a stay at home Dad,” Morneault said. “I bought some woodworking tools and, once I got a lathe, I was hooked.” 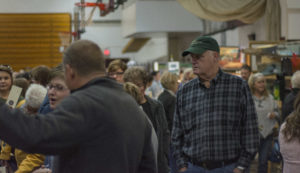 Morneault does everything at home, and makes all of his products from scratch.

Morneault then sands the bowls, working up to 600 grit sandpaper, and then coats his products with a lacquer finish.

Each vendor, according to Kane-Gibson, receives a form to sign up for next year’s event, so she and city officials already have initiated the process of organizing the 2018 crafts fair.

While Kane-Gibson does not have an exact count for how many attended, she and other volunteers handed out free raffle tickets at the door, adding that while “not everyone grabbed a ticket,” the city gave out “over 1,000” throughout the weekend.

“Everyone before me has done a great job managing and facilitating [the Arts and Crafts Fair],” Kane-Gibson said. “I feel like I’m the next person to carry this torch; I get to be a part of it this year and it’s fun.”

Halfway Home Pet Rescue in Caribou has partnered with the Houlton Humane Society shelter for a cat spay and neuter clinic on Saturday, May 30, and Sunday, May 31, in Houlton.
Campaign Corner END_OF_DOCUMENT_TOKEN_TO_BE_REPLACED