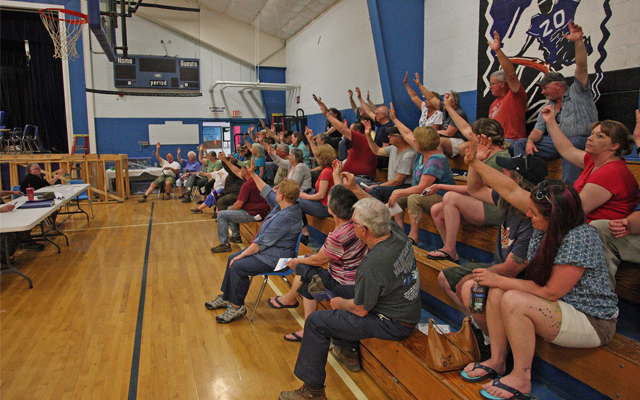 Joseph Cyr • January 23, 2018
The town of Cary Plantation has moved one step closer to dissolution.

AUGUSTA, Maine — The town of Cary Plantation has moved one step closer to dissolution.

Tina Libby, chairman of the deorganization committee, said Tuesday morning that the town’s efforts to disband passed through a legislative work session Jan. 17 in Augusta and will now head to the Maine House of Representatives for a vote.

The exact date of that vote is unknown, Libby said, as it has yet to be placed on the legislative calendar.

“It could be next week, it could be next month,” Libby said. “We know they have to be done by April. The process is so involved, with so many little things you have to figure out.”

Attending the work session in August were Tina Libby; Kai Libby, first assessor; Rob Smith, second assessor; and Cindy Green, a member of the deorganization committee. The group did not offer any testimony during the session, Tina Libby said, but fielded several questions.

If the House approves the deorganization request, the town would then need to hold another election, with a minimum of two-thirds of the residents who voted in the last gubernatorial election participating. Cary would need a majority vote of 49 ballots in favor of deorganizing to make the move final.

Back in October, Cary residents voted 85-6 to pursue deorganization for the second time in as many years. Of the 42 towns that have deorganized in the last century, few had more than 100 residents at the time. At least two exceptions were Benedicta in 1987 and Madrid in 2000.

“We really are not like many of the other towns that have deorganized,” she said. “We are already at 100 percent valuation and have a mill rate of 28.5.”

In March, 2016, the state denied Cary’s request to deorganize, citing the town’s size a deciding factor.

As part of the process of disbanding, Libby said the town had to perform its own census, to give an accurate number of residents to the Legislative committee. That census, conducted Jan. 16, revealed there are 189 residents, including children, in the community.

In addition, Libby said, the town has had to fix several road issues and still has to repair a double culvert on the Wilcox Road before it will meet with the approval of  Unorganized Territory public works director Paul Bernier.

“This process will cost us some money,” she said.

The town’s desire to deorganize stems from the inability to keep up with rising costs of running its government and school expenses. According to Libby, in 2017, 30 properties are delinquent in paying roughly $70,000 in property taxes. For 2016, there are 28 properties that have liens on them for $26,083, and for 2015, there are 17 properties owing $15,715.

Those 17 property owners from 2015 have until Feb. 16 to pay their back taxes, or else the town will take over ownership of the property, she said.

“We have more than $100,000 in delinquent taxes, so how can we take care of our roads or pay for our school  budget?” Libby asked.

Halfway Home Pet Rescue in Caribou has partnered with the Houlton Humane Society shelter for a cat spay and neuter clinic on Saturday, May 30, and Sunday, May 31, in Houlton.
Campaign Corner END_OF_DOCUMENT_TOKEN_TO_BE_REPLACED