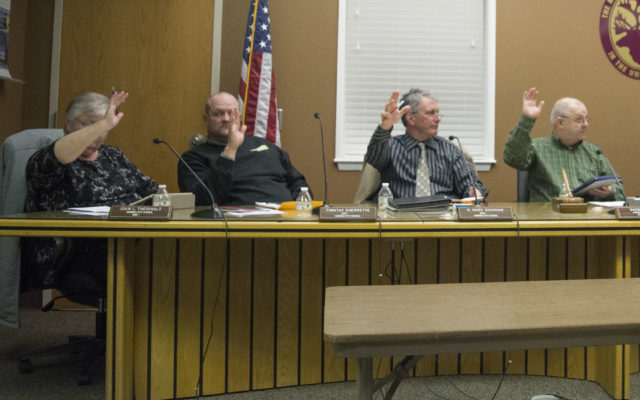 CARIBOU, Maine — City councilors were reluctant to take on any additional responsibilities for asbestos removal at two former Caribou schools — Hilltop and Sincock– and voted following lively discussion at the March 12 city council meeting to put the costs in the hands of a developer and RSU 39.

City Manager Dennis Marker proposed at the meeting putting five properties out to bid for asbestos abatement — the two former schools and three residential properties the city has acquired at 66 York Street and 32 and 29 Patten Street.

Councilors agreed to seek bids for asbestos removal at the three residential properties, but balked at the city’s involvement in the school properties.

The two former school properties are part of a land swap deal worked out previously to pave the way for a roughly $45 million PreK to 8 school project that has been approved by both local voters and the state of Maine. With the new school being built on Teague Park, a land exchange needs to occur so an equivalent amount of property is being used for park purposes.

Much of this land will be across the street, next to the Caribou Wellness and Recreation Center, once the Caribou Learning Center is demolished, and another piece of the land will be on Main Street, once the Sincock building is torn down.

While many of Caribou’s existing schools are scheduled to be torn down to make way for one consolidated facility, Hilltop Elementary School will be repurposed into a senior home. The City Council unanimously approved an ordinance authorizing the sale of Hilltop to Caribou Senior Housing, LLC on Jan. 8 of this year.

Marker previously has stated that once RSU 39 turns over ownership of Hilltop Elementary to the city, the city will give the school building and 7.14 acres of surrounding land to Caribou Senior Housing, LLC. In turn, the limited liability corporation, Marker said, will give the city the 0.66 acres surrounding the former Sincock Administrative building on Main street, and also take care of demolition and asbestos abatement at both Hilltop and Sincock. Studies done on the former schools have estimated the cost of asbestos removal at $233,000 for Hilltop and $12,200 for the Sincock building.

In an effort to expedite the processes of tearing down Sincock and transitioning Hilltop to a senior home, Marker indicated in the council’s latest meeting packet that “any costs associated with the Sincock and Hilltop schools would be reimbursable under the land exchange agreement between the city, RSU 39 and Caribou Assisted Living. Reimbursements would either come directly from Caribou Assisted Living or through the proposed Hilltop Tax Increment Finance District.”

Tax increment financing, or TIF, is a system in which future taxes on a particular piece of land (or TIF district) can be used to fund public or private projects within a municipality for up to 30 years.

Councilor Hugh Kirkpatrick asked, however, why the city should solicit bids on something “that we’re in agreement is not our cost to bare.”

“I think, ultimately, [Caribou Senior Housing] should solicit a bid,” Kirkpatrick said. “A bid in RSU 39’s name would be fine, but I think we need to keep our name off it.”

Marker said the reasoning behind this request is that it would allow the senior housing project to be finished as quickly as possible.

“They [Caribou Senior Housing] want to be open in late fall,” Marker said, “and in order to do that they need to have the asbestos cleaned out as soon as possible. Even if we put it out to bid next week, and all the stars were aligned, the asbestos wouldn’t be cleaned out until June. It’s just a matter of getting everything ready for them to take ownership.”

While councilors approved the sale early this year, Caribou Senior Housing, LLC will not own the property until April 1 at the earliest. Marker said this is so the city can establish “tax increment financing options for redevelopment of the property.”

Mayor David Martin asked if the Sincock property should be put out to bid for asbestos removal, since the city technically owns that building.

Councilor Joan Theriault suggested that, since Caribou Senior Housing, LLC agreed to arrange asbestos removal and demolition, the LLC should ultimately be responsible for handling those two issues.

Marker has indicated in the past that Caribou Senior Housing, LLC has many owners, but the only one that has been named publicly is Carl Soderberg, owner of Soderberg Construction in Caribou.

Marker suggested creating a separate agreement or contract with Soderberg Construction in which that firm is responsible for demolition of the building.

Councilors then motioned and voted in favor of authorizing Carl Soderberg to take down the Sincock building and handle the asbestos within.

Martin then discussed Hilltop, which is still owned by RSU 39, the school system that serves Caribou, Limestone, and Stockholm.

“We don’t own Hilltop,” said Martin. “What happens if we say we don’t want Hilltop? What does RSU 39 do, then? Can they make a deal with Caribou Senior Housing?”

“The RSU budgeted for this, and it is reimbursed, so why don’t we let them deal with the expense and get reimbursed? It’s their responsibility,” he said.

Marker said there are some nuances associated with establishing the property as a TIF district, and that it’s a “matter of who is doing the work and making sure we have the credit enhancement agreement” set up to reimburse those who bare the expenses.

Councilors then unanimously voted to have RSU 39 take care of the asbestos abatement, and Marker added that the credit enhancement agreement would be “adjusted accordingly.”

Most of us have had just about enough of hearing about COVID-19 and the different variants that are popping up, but unfortunately, this pesky virus is still around.  It’s important to know a few warning signs and tips if you think you or your furry family members are affected with this illness.
What's Happening This Week END_OF_DOCUMENT_TOKEN_TO_BE_REPLACED