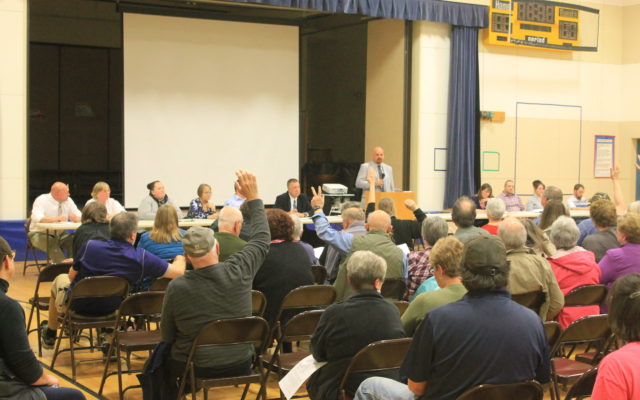 Anthony Brino • May 7, 2018
After a two hour public meeting Thursday, the MSAD 45 administration and board are aiming to devise a new budget that will be acceptable to three towns facing the burden of rising school costs and declining student enrollment.

WASHBURN, Maine — After a two hour public meeting Thursday, the MSAD 45 administration and board are aiming to devise a new budget that will be acceptable to three towns facing the burden of rising school costs and declining student enrollment.

More than 100 people from Perham, Wade and Washburn attended the meeting at Washburn District Elementary School Thursday to discuss next year’s school budget, taxes and the future of their district.

Even with no new programs or spending, taxpayers in the district are facing double digit percentage increases to their school-related taxes due to declines in state reimbursement and student enrollment.

“I can’t create a budget, the board can’t develop a budget, that’s not going to impact somebody negatively,” said superintendent Brian Carpenter at the conclusion of the meeting. “If I give you a zero increase in the budget, your taxes are still going up.”

“You may need to consolidate. That means closing buildings, that means taking on debt,” said Carpenter, who serves as both the superintendent of MSAD 1 and MSAD 45.

“Business is great to have,” Carpenter said, referring to comments about growing Washburn’s taxbase and attracting new residents. “But you know what? People aren’t going to come if you have no schools.”

Over the course of the meeting, MSAD 1 and MSAD 45 assistant superintendent for business Clint Deschene explained the district’s financial predicament and took questions and suggestions from people in the audience.

Under one budget scenario, the district would make certain cuts to positions, but not programming, and still have a 29 percent increase in local school taxes. Under another budget scenario, local school-related taxes could increase 6.7 percent if the district made cuts including ending the industrial arts program and a high school teaching position.

Several MSAD 45 board members and residents at the meeting said they were worried that more cuts to programming could drive more students out of the district and to other schools in search of electives and extracurricular activities.

The discussion also included comments in support of closing the high school, adopting one principal for both the elementary and high schools, and cutting back on the $120,000 a year athletics program.

“I believe SAD 45 should be pre-K to 8. The high school should be closed,” said Floyd Maynard of Washburn, generating applause from some other attendants.

Last May, the district formed a committee to explore the possibility of closing the high school, but soon dropped the idea after many community members voiced support for keeping it open. Under state law, any school closure requires approval by local voters in a referendum.

Chris McCoy of Washburn suggested that the district should keep its industrial arts program, which serves 27 students and includes a popular woodworking program. Instead, he suggested cutting back on athletics.

“I wanted to speak in support for Mr. Hanson,” he said of Don Hanson, the industrial arts director. “My oldest boy has special education needs. He had a hard time with math. That man has taught that boy how to add and subtract fractions in his head.”

Echoing other comments, McCoy said the district could transition the athletic program to a “pay to play” model where students and their families cover the cost of the sports or seek fundraising from businesses.

Deschene also asked if the three towns would be open to contributing some of their municipal fund balances to offset a school budget increase, an option that he said he has seen towns in other parts of the state take. However, Washburn and Wade town manager Donna Turner rejected the idea and explained that Washburn’s limited fund balance has been allocated to much-needed road repairs and a water infrastructure project funded with a grant that requires a local match.

The MSAD 45 board and administration said they would take the suggestions from the hearing and plan to come up with a proposal for approval at a public meeting in June.

“We’re going to bring forward a budget. It’s going to hurt somebody. And then you’ll vote it up or down,” Carpenter said. “If it fails, we’ll get something that night that works.”

It was a freezing day across The County, but you could hardly tell from the turnout. Even after a massive surge in absentee ballot requests across the Central Aroostook area, droves of people came out to vote in Presque Isle, Mapleton, Washburn and Fort Fairfield.
Pets END_OF_DOCUMENT_TOKEN_TO_BE_REPLACED