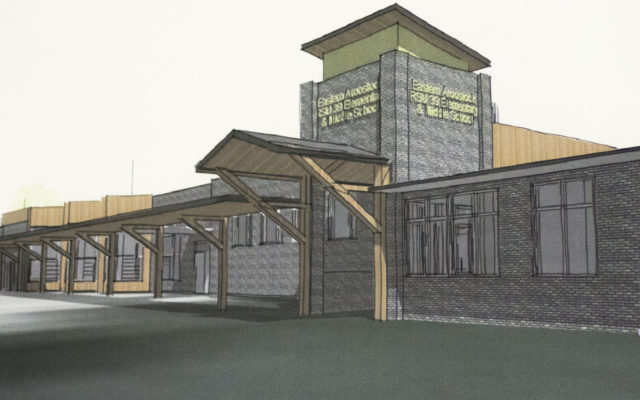 Contractor to break ground on new Caribou school this month

Chris Bouchard • July 2, 2018
Construction of a new PreK-to-8 school in Caribou should begin in mid-July, with a groundbreaking ceremony scheduled for Aug. 3 at 9 a.m., according to RSU 39 Superintendent Tim Doak.

CARIBOU, Maine — Construction of a new PreK-to-8 school in Caribou should begin in mid-July, with a groundbreaking ceremony scheduled for Aug. 3 at 9 a.m., according to RSU 39 Superintendent Tim Doak.

The school will be built on Bennett Drive, adjacent to Teague Park Elementary School. RSU 39 residents (Caribou, Limestone and Stockholm) voted the project forward during an early 2017 election, including roughly $45 million worth of state funding, which covers several aspects of the project including construction, demolition of several existing school buildings, architect fees, legal fees, soil work and surveying.

A second question asked voters if they would approve roughly $2 million in additions, which would expand the gymnasium and music room space.

The project essentially moved forward as planned until May of this year, when RSU 39 received only one bid on the new school — a bid $10 million to $12 million over budget.

Doak said on Friday, June 29, that about $37 million of the original $45 million was set aside for construction, and that the bid came in at roughly $49 million.

School officials were able to work with the contractor, Bowman Constructors of Newport, and get the price down to $41.7 million with significant reductions to the project. Doak is currently in talks with Maine Department of Education officials and hopes to obtain an additional $4.7 million in funding to compensate for the difference.

If the state grants the extra funds, RSU 39 area voters would approve the extra money, which the superintendent said should not affect local taxpayers, during a September referendum.

At this point, Doak said, there are two possibilities for the new school. First, if the state does not approve the additional funding, the building would be essentially “a shell,” filled with furniture and appliances from existing buildings. Secondly, if the funding is approved, the project would include new furniture as well as some additions removed in negotiations, such as a biomass boiler and the demolition of the Teague Park Elementary School building.

Because of these unanticipated hurdles, Doak now anticipates construction to finish in August of 2020 as opposed to February 2020.

Looking forward, he is optimistic about the state funding as well as the completion of the new school.

“I met with the Commissioner [of Education] about a month ago and he’s on board,” said Doak, adding that state approval is likely to happen and seems to be “a formality” at this point.

“Staying the course with the current bidder and working to bring the price down was probably our best option,” he continued. “This is a golden opportunity for Caribou.”

Gubernatorial candidate John Glowa said that he wants to spur government reform that truly creates a system of, by and for the people when he visited Presque Isle City Hall.
Pets END_OF_DOCUMENT_TOKEN_TO_BE_REPLACED

Many of you have been asking about our super popular “Toast to the Animals” celebration. After several COVID-19 cancellations and not being able to host this great fundraiser, we are finally ready to celebrate the animals once again and help support the Central Aroostook Humane Society.
What's Happening This Week END_OF_DOCUMENT_TOKEN_TO_BE_REPLACED