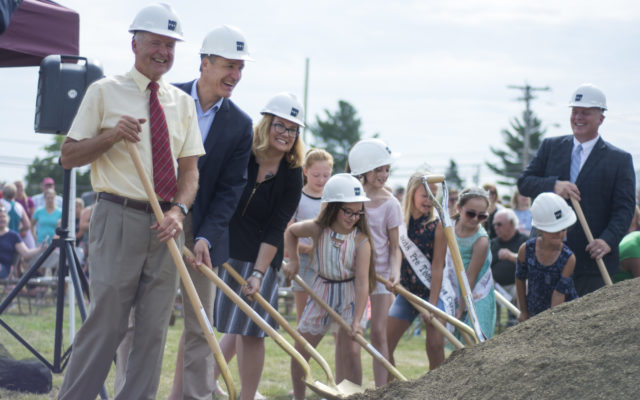 Chris Bouchard • August 7, 2018
After nearly three years of planning, officials from RSU 39 and PDT Architects of Portland were able to brandish golden shovels during an Aug. 3 groundbreaking ceremony for a new pre-kindergarten to eighth grade school

CARIBOU, Maine — After nearly three years of planning, officials from RSU 39 and PDT Architects of Portland were able to brandish golden shovels during an Aug. 3 groundbreaking ceremony for a new pre-kindergarten to eighth grade school in Caribou to serve the member communities of Caribou, Limestone, and Stockholm.

The project hit a snag in May when the only bid for construction was between $10 million and $12 million over budget. Since then, however, school officials, the architects, and contractor Bowman Constructors of Newport have negotiated a reduced price and building plan. State education officials also agreed in July to provide an additional $4.8 million for the project.

That additional funding, though, needs to be approved via referendum vote on Thursday, Sept. 6, in each of the RSU 39 communities.

RSU 39 board members approved the referendum itself last week and Superintendent Tim Doak emphasized, both during that meeting and at the groundbreaking, that the $4.8 million will not cost local taxpayers more. The money is coming entirely out of the state Department of Education budget. Even if residents vote down the funding, Doak said state education officials will still spend the $4.8 million on a school project in another Maine community.

During the groundbreaking, Doak described the new school project as a “memorable moment in history” to “put a brand new school in Aroostook County.” He and other officials also referred to the project as a once in a lifetime opportunity.

The superintendent told the packed crowd Monday that he was in his 29th year of education, and that 21 of those years were spent in an administrative role.

“In those years, I tried to keep to four pillars,” he said, with the number one pillar being the well-being of students, and the others being the staff, staying competitive, and consideration of local taxpayers. 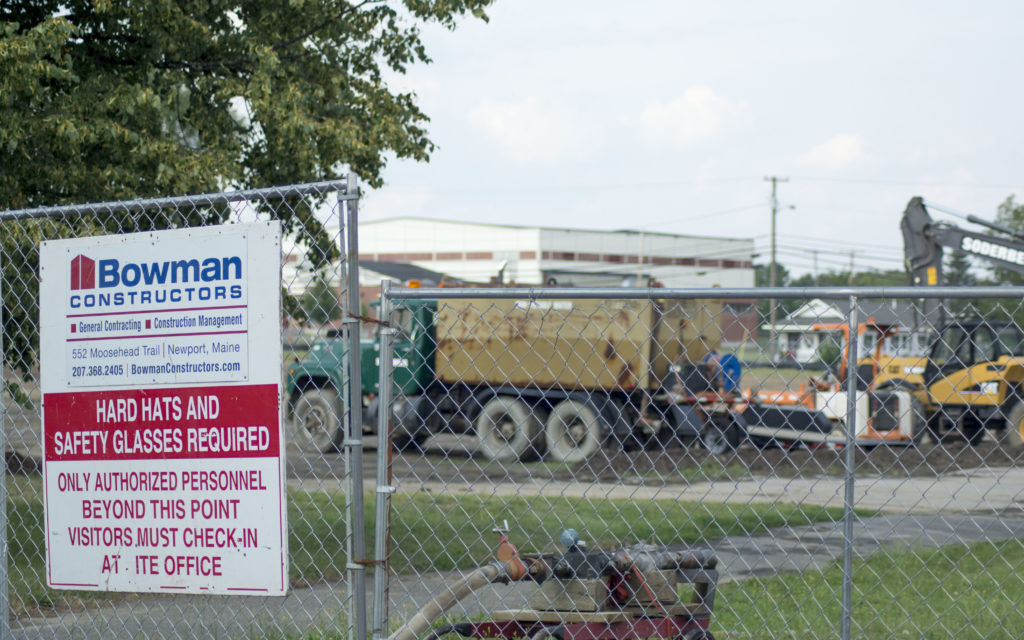 Construction has commenced on a new pre-kindergarten through eighth grade school in Caribou. Contractors have fenced off the entire Teague Park area, and the city has placed the portion of Park Street perpendicular to Glenn Street and Bennett Drive in the hands of local school officials, who have shut down that portion of the road. (Christopher Bouchard | Aroostook Republican)

Doak concluded by saying he believes the new school will stay true to all four of those objectives by providing students with innovative opportunities, staff and teachers with more instructional opportunities, a state of the art innovation center geared toward robotics and the STEM fields, and consideration of local taxpayers with energy efficient biomass heating systems as well as much of the funding provided by the state Department of Education and Friends of Caribou Schools. The friends group is a local fundraising organization chaired by Sam Collins and Ron Willey, which raised funds for local additions such as a second gymnasium and extra music room space.

During the ceremony, Collins said the Friends of Caribou Schools currently has raised nearly $500,000. Community donations from individuals and organizations include a $100,000 donation from Aroostook Savings and Loan, $50,000 from the Caribou Rotary Club, MMG, S.W. Collins, and the Soderberg family, as well as many more donations from companies and families in the community.

Collins thanked school officials, PDT Architects, and Bowman Constructors for their perseverance in working together to make the project happen.

“When this bid first came out,” said Collins, “we said, ‘What are we going to do?’ This was all due to the perseverance of Kevin Bowman, PDT, and Tim Doak. It was so critically important to make this come together. It would’ve been delayed at least a year and the project would have been more expensive. So hats off to you for making this happen.”

Kevin Bowman of Bowman Constructors said this is his second large school, with the first being built in Ashland ten years ago. He also said that, if it weren’t for his wife, he likely wouldn’t have gotten involved.

“You can all thank my wife,” he said. “She was instrumental in influencing my brother and I to take this job, or even look at it, so you can thank her.”

He added that, despite Caribou being a small community, it is surrounded by valuable resources and subcontractors, which is a great asset to any contractor.

“It’s awesome for us, as contractors, to have these resources,” he said. “I appreciate all the hard work you folks have done.”

Caribou Mayor David Martin spoke to guests about his early education, which he began in 1955 in a “one room schoolhouse in Cross Lake Township.”

“I remember there were four kids in my grade,” he said, “and 35 or 40 of us altogether. We had a room to put our jackets, an outhouse that was unheated but connected to the school, and three wood burning stoves.”

To contrast, he spoke of what the future holds for Caribou, a state of the art building with new technology, innovation labs, and robotics, to name a few of its offerings.

“So I tell you folks,” he concluded, “these are the good old days.” 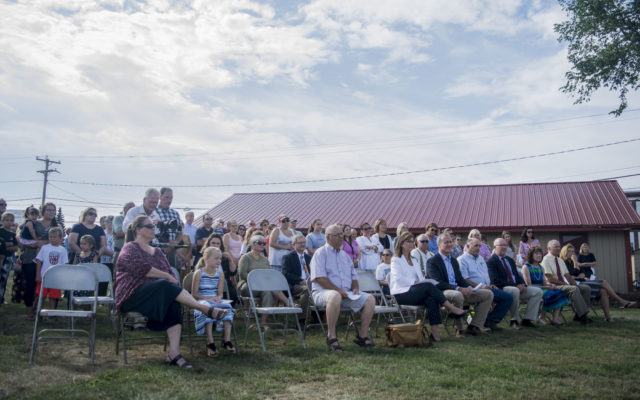 About 100 people gathered for the groundbreaking of a new pre-kindergarten through eighth grade school in Caribou on Friday, Aug. 3.
(Christopher Bouchard)