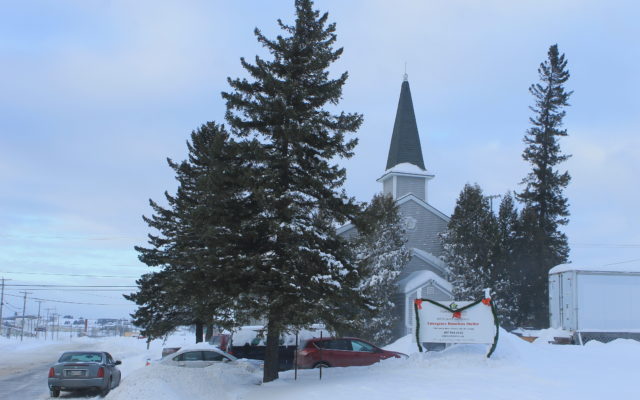 Anthony Brino • December 21, 2018
Aroostook County's only emergency homeless shelter for the general public is aiming to find a place to build a new shelter and expand its services.

PRESQUE ISLE, Maine — Aroostook County’s only emergency homeless shelter for the general public is aiming to find a place to build a new shelter and expand its services.

Homeless Services of Aroostook is aiming to have a new homeless shelter up and running in 2021, said executive director Stephen Eyler.

“We want to be the kind of place where if folks are in need, we have an answer,” Eyler said. “We hope to design the building in a way that will empower the folks we serve.”

Since 1984, the Sister Mary O’Donnell Emergency Homeless Shelter has operated out of a former military base chapel on Central Drive owned by nearby Northern Maine Community College. Spearheaded by the late Sister Mary O’Donnell of St. Mary’s Catholic Church in Presque Isle, the shelter has 43 beds with 11 rooms and serves more than 100 people each year, Eyler said.

“The shelter served its purpose well for a while, but it’s really not conducive to being a homeless shelter,” Eyler said. “It’s high maintenance. It’s costly to heat. Nine of the 11 rooms are on the second floor with no elevator, and more and more of the folks we serve have mobility challenges.”

The shelter currently serves both individuals and families, and while it serves the general public, it is considered a “high barrier” shelter in that it conducts background screenings and does not admit people with violent criminal histories.

“Not everyone can stay with us and it’s always for safety reasons,” Eyler said.

However, he added that in the new facility, the organization wants to offer both a family shelter in one section and a seperate low barrier shelter.

“In the new location, we’re hoping to expand our role within the community. In addition to the family shelter would be a night shelter, a low barrier shelter. Anyone for whatever reason would be able to stay there on a night-by-night basis. It’s a need that exists in Aroostook County.”

Homeless Services of Aroostook runs the only homeless shelter available to the general public in The County. The Hope & Justice Project operates emergency housing for victims of domestic violence out of facilities in Houlton, Caribou and the St. John Valley.

Homeless Services of Aroostook also operates transitional housing out of leased housing units and coordinates with other agencies in offering people resources for housing, employment, health care and other services.

Although it’s not often visible, homelessness is a major problem in Aroostook County, as a lack of affordable housing and transportation intersect with the struggle to find good jobs, Eyler said.

“Employment, affordable housing, and transportation are the main reasons that folks end up landing on our doorstep for help. Oftentimes, it’s a combination of all three.”

People often come to the shelter after long periods of staying with family or friends.

“Couch surfing is alive and well and is epidemic. Folks will crash on a couch as long as they can until there aren’t any more couches to crash on in other peoples homes,” Eyler said.
Late fall and spring are peak times for the shelter, he added. The spring is “a time of year we get a lot of calls, and we asked folks why. The reason we kept getting was, ‘I’ve exhausted all the couches I have, but they wouldn’t put me out in the winter time.’”

Eyler said that in the ideal situation for the new facility, someone will step up to donate land to the organization and a capital campaign will be started for the building costs.

“We’re the safety net. We catch the folks that fall. We need to build a better safety net so that they’re not falling through the cracks.”

Those interested in supporting Homeless Services of Aroostook can reach Stephen Eyler by calling (207) 764-5114 or emailing director@aroostookhomeless.org.

I was mentioning to our board of directors this past week that I got a quarterly report from a large online retailer who will donate a portion of my purchases to a charity I select.
Campaign Corner END_OF_DOCUMENT_TOKEN_TO_BE_REPLACED