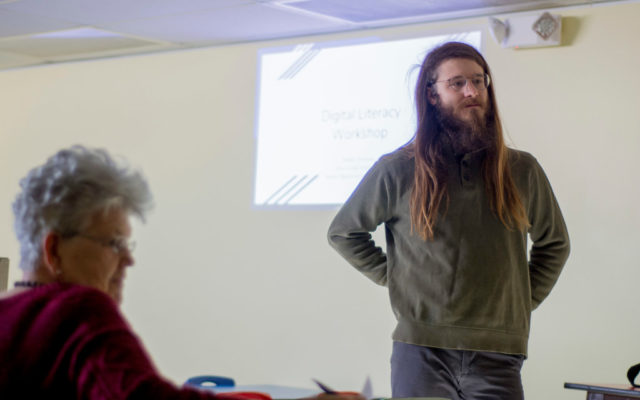 CARIBOU, Maine — Caribou residents gained a greater understanding of computers and became a little more digitally literate during a Feb. 20 workshop at the Caribou Public Library.

The program was funded by an AmeriCorps grant through the Maine Digital Inclusion Initiative and its parent program, the National Digital Equity Center.

Robert Hohman, an AmeriCorps volunteer, led the Wednesday class. He and another regional partner are responsible for conducting such workshops and classes throughout Aroostook County.

Hohman gave attendants a recruitment survey at the start of class, and described the various classes available through the program.

Ultimately, he said the digital literacy classes are intended to “help people get the skills they need to get jobs or, for older adults, helping them enjoy their lives.”

While he plans to teach classes tailored to different skill sets in the future, the Wednesday workshop primarily involved discussion of what attendants could learn through the program.

“This is an intro to the program and an overview of everything,” he said. “The question I answer most is, ‘What are you doing?’ This is partially because we’re just getting off the ground and there is a lot going on. So this is primarily to give people a full understanding of who I am, what I’m doing here, and what I’m going to be doing.”

In assessing where certain individuals stand in terms of digital literacy, future classes may be tailored to meet these needs. For example, Hohman said that some individuals may say they’re proficient in Microsoft Word, but might not know how to create a template, something that could be useful in terms of composing letters. As a result, the workshop involved a dialog in which he asked several questions in order to obtain a greater understanding of everyone’s technological understanding.

Another important aspect of the classes will involve measures needed to ensure online safety.

“People can get very comfortable with passwords,” Hohman said, “and while it may be convenient, it could also be dangerous to yourself and your family. Identity theft is on the rise, and if someone can steal your password from one place, they could get into your email and start signing up for other websites and services.”

Understanding the role of social media and how it can affect one’s career or future career is another component of digital literacy, which Hohman said is constantly changing.

“It’s a broad topic with lots of little pieces that are constantly changing,” he said. “That’s what makes digital literacy so hard. It’s not like learning to read. Once you learn to read, you can only get better, but with digital literacy there are always new programs, new threats, and new changes.”

One of the participants on Wednesday, Dolores Martin, said she joined to learn how to deal with situations in which technology stops working as intended.

“I get frustrated when something goes wrong,” she said, “and I have nobody to rely on. Then I get upset.”

Martin said she would like to learn about when it’s OK to download certain programs, and which ones are safe, and also how to fix an issue with her iPad when the screen blacks out.

“Sometimes I go on Facebook and it blacks right out and then it won’t come on for an hour or so,” she said. “It’s probably too full. I should maybe junk some of the stuff in there, but I don’t know how.”

Brenda Bourgoine, a genealogist who volunteers her time working on archives, said she is attending classes to “broaden her knowledge” and to learn more about using Microsoft Excel.

“We’re developing a database,” she said, “and I don’t know how to create an Excel file. I can work with it just fine if someone else creates it, but I want to learn more about the program.”

Hohman said that while the workshop and a handful of other classes are an hour in length, most of the topics involve three hour classes in two sessions, such as the “Intro to Computers” class.

Once he is able to gauge public interest in certain areas, classes will primarily be set up based on proximity to those who are interested. He added, however, that this is occurring throughout The County, wherever libraries may be located.

“This month I’ve had a workshop scheduled every other day,” he said. “I’m planning on holding these as regularly as I can. I have one in Fort Fairfield scheduled for Friday, and my schedule already goes into April and May of this year.”

Anyone interested in joining a class can call 207 259-5010, or send an email to info@digitalequitycenter.org.

“This is all free to the public,” said Hohman. “As long as the AmeriCorps grant is there, they always will be. Anyone at any skill level is welcome.”