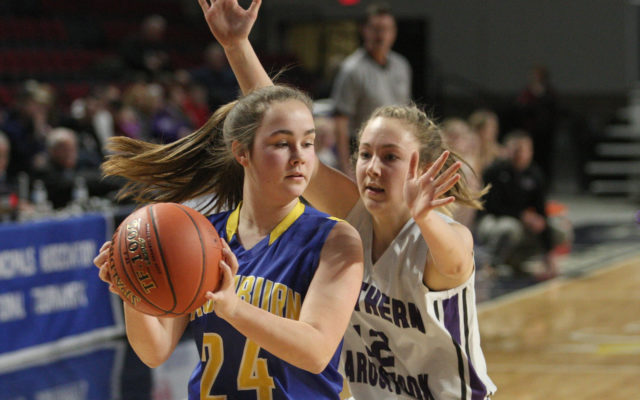 The all-tourney teams for Classes B, C and D are chosen by media, tournament officials and Maine Principals’ Association representatives. The BDN did not select teams for the Classes AA and A tourneys.

It is the second consecutive Osborne Award for Porter, who guided Southern Aroostook to the state championship a year ago.

Curtis was chosen as a freshman last year.

The Class B all-tourney team is made up entirely of first-time honorees.

Porter scored 44 points in three tournament victories for Southern Aroostook of Dyer Brook, including 17 points in the 62-49 win over Deer Isle-Stonington in the Class D North championship game.

Brewer racked up 45 points in the tourney and shared scoring honors with Porter in the final with 17 points. She had 20 points and eight rebounds in the victory over Washburn.

Morey and Gray led the resilient Mariners to a berth in the final. Gray scored 36 points in three games and handled the ball from her point guard spot. She had 15 points and five rebounds in the quarterfinal victory over Ashland in the quarterfinals.

Morey averaged 11 points, highlighted by a 16-point showing against Woodland.

The 5-foot-11 Curtis firmly established herself as one of the top post players in the class with two superb performances. Curtis turned in a 30-point, 19-rebound showing in the semifinal loss to Deer Isle-Stonington.

In Class C, the 5-9 Ireland was the driving force behind Penobscot Valley’s first regional championship since 1986, averaging 18.7 points per game. She scored 11 of her 15 points in the second half to help the Howlers of Howland erase an eight-point deficit and upset Dexter 24-20 in the championship game.

Grant averaged 18 points per game to team with Herrick in leading Dexter to its third consecutive C North championship game appearance. The talented point guard pumped in a game-high 23 points in the quarterfinal victory over Fort Fairfield.

Despite being just 5-6, Herrick was a force under the boards and as a shooter. She scored 34 points with 33 rebounds in three games with 17 points and 14 rebounds in the come-from-behind victory over Calais.

Sharpshooter Cook averaged 22.5 points in two contests for Calais and poured in 29 points in the quarterfinal win over Madawaska, including six 3-pointers as Calais set the C North single-game record with 12.

The 5-7 Alley burst onto the tournament scene in dramatic fashion with a 23-point performance in her Class C North quarterfinal debut as No. 9 Stearns upset top seed Central Aroostook of Mars Hill 70-45. She also had eight assists and five steals.

In Class B, the 5-8 Watras scored 41 points and corralled 34 rebounds to power Mount Desert Island to its first regional title since 2014. She registered 17 points, 10 rebounds and two assists in the triumph over Waterville in the final.

Chamberlain set the Class B North record for 3-pointers with 11, accounting for 33 of her 37 points in the tournament. She hit three 3-pointers with five rebounds in the triumph over Waterville.

Garling was Waterville’s leading scorer in their victories over John Bapst of Bangor and Hermon with 19 and 16 points, respectively. She had eight of her 16 points in the third quarter as the Panthers turned a four-point deficit and turn it into a 35-26 lead.

Thompson was a rebounding machine, use her leaping ability and tenacity to collect 38 rebounds in three games. She also scored 23 points, with a team-high 12 points and 10 rebounds in the loss to MDI.

Next year's Caribou City Council will include a new member and a longtime councilor thanks to Tuesday's election.
Pets END_OF_DOCUMENT_TOKEN_TO_BE_REPLACED

Happy fall to you all.  It has been a super beautiful one so far. The harvest has gone well and the temperatures have remained warm, so enjoy these rare days because before long we will be into the winter months, and we all know what that means.
What's Happening This Week END_OF_DOCUMENT_TOKEN_TO_BE_REPLACED