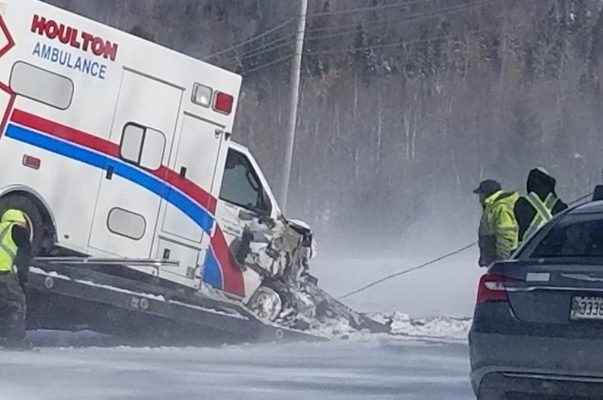 Staff Pioneer Times • April 5, 2019
A Houlton ambulance driver responding to another accident on Route 1 in Bridgewater at about 8:30 a.m. on Thursday could not stop on the icy roadway and drove into the rear end of a stopped car before sideswiping another vehicle and going off the road, according to the Maine State Police.

A Houlton ambulance driver responding to another accident on Route 1 in Bridgewater at about 8:30 a.m. on Thursday could not stop on the icy roadway and drove into the rear end of a stopped car before sideswiping another vehicle and going off the road, according to the Maine State Police.
Those involved suffered minor injuries but no one was transported to the hospital, MSP Sgt. Chad Fuller reported in a release issued Friday evening.
Glen Littleton, 42, of Houlton, was traveling north and following another ambulance when both came upon traffic stopped for another crash, according to Fuller.
The first ambulance moved into the left lane to go around the stopped traffic, but Littleton did not see the vehicles in front in time to stop on the icy road.
Fuller indicated that the ambulance swerved and struck the left rear of a 2011 Kia driven by Sharon Cohen, 38, of Houlton.
The ambulance then made it past at tractor trailer in front of Cohen, but sideswiped a 2012 Chrysler stopped in front of the big rig before coming to rest off the road. Stephen Rush, 58, of Houlton was at the wheel of the Chrysler.
All three drivers involved were wearing seat belts.
Fuller did not state in the release whether charges will be filed but wrote that Littleton was driving “too fast for road conditions.”
High winds and blowing snow that made travel hazardous on Thursday were considered factors in the collision earlier that morning of two passenger vans on U.S. Route 1 on Bunker Hill in Bridgewater.

I was mentioning to our board of directors this past week that I got a quarterly report from a large online retailer who will donate a portion of my purchases to a charity I select.
Campaign Corner END_OF_DOCUMENT_TOKEN_TO_BE_REPLACED