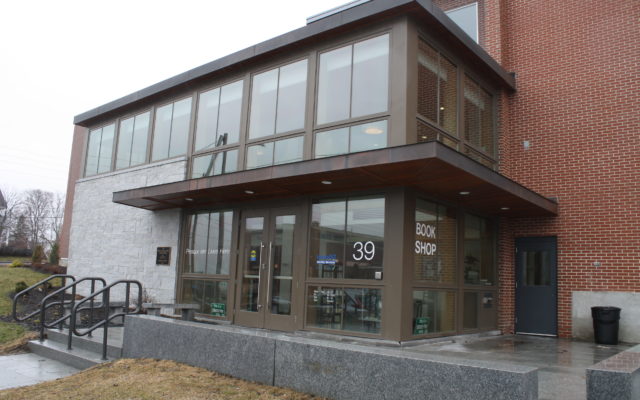 Melissa Lizotte • April 27, 2019
Today, the three-story tall Mark and Emily Turner Memorial Library stands at the intersection of Second and State Street in Presque Isle welcoming the numerous patrons who stroll through its front doors every day.

PRESQUE ISLE, Maine — Today, the three-story tall Mark and Emily Turner Memorial Library stands at the intersection of Second and State Street in Presque Isle welcoming the numerous patrons who stroll through its front doors every day. But the library would not have been possible if various groups throughout history had not stepped up to shape what the space has become.

In 1874, community members formed the Presque Isle Library Association and decided to bring books to the public through store-front libraries. Business owners gathered up the books that each of them had and set up shop at a varying locations. Over the next 34 years, these “libraries” took turns appearing at various locations, including Rowell’s Drugstore, the post office, the millinery store and Holmes Jewelry Store.

“During the early days the initial mission was to provide books to people who could not afford to purchase their own, which remains part of what we do today,” said library director Sonja Eyler. “It shows that even back then, Presque Isle valued education.”

As the 20th century began, the library association members believed that in order to better preserve books for residents, they needed to establish an official library building. The group received help from well-known millionaire Andrew Carnegie, who provided a $10,000 grant from his charity fund. According to the Maine Policy Review, Andrew Carnegie gave 1,419 grants to libraries across the country from 1897 to 1911, including 18 in Maine. Four were awarded in Aroostook County to the towns of Presque Isle, Caribou, Fort Fairfield and Houlton.

Local businessman Thomas Phair purchased the lot where the library is currently located for $1,000. The Presque Isle Free Library officially opened on July 1, 1908, with a collection of 2,000 books and hired Lou Marston as the first librarian.

In the earliest decades of the library, the librarian enforced strict rules to ensure that the space remained quiet for patrons. The Board of Trustees meeting minutes for Nov. 8, 1933, reveal the board’s decision to not allow any noise disturbances in the library or else the perpetrator “shall be forbidden to enter the library for a period of two weeks and the name of such person shall be posted in a conspicuous place near the librarians’ desk.”

One of the library’s most beloved librarians was Beulah Akeley, who served in that position from 1932 to 1945. Akeley’s husband, George Winfield Akeley, was a potato farmer and together they raised 18 children. Eyler said that library publications portray Akeley as someone who was committed to giving readers access to books and educational materials and a “light and cheerful” person who welcomed everyone.

Akeley was so well known in the community that she became the subject of two articles — “The Most Unforgettable Character I’ve Ever Met” by Cornelia Stratton Parker, published in Reader’s Digest in March 1945, and “Typical Maine Mother Raised 18 Children” published in the Boston Sunday Post in 1945. Akeley passed away in 1956 at the age of 77.

Her son, Robert Vinton Akeley, grew up to become a potato breeder who helped introduce 40 new potato varieties and wrote over 100 publications on potato breeding while his wife, Hope Akeley, worked at the library before the couple moved their family to Washington D.C. around 1954. Over five decades later their daughter, Mary Akeley Smith, who now lives in California, donated $1 million so that the library could complete the expansion of a new wing and make interior and exterior renovations from 2011 to 2014.

Recent renovations included the downstairs Akeley Gallery, an upstairs young adult section, and new lighting, carpeting and furniture, the latter of which were funded by an additional $25,000 donation from Smith.

This wasn’t the first time that the library renovated in order to keep up with changing times. Local businessman Mark Turner and his wife Emily donated $60,000 so that the library could add on to its existing space and update the architecture in the 1960s. In 1967, the Turners became the namesakes of the library.

“There was a stark change from the old to the new building,” said Eyler, about the 1960s renovations. “They replaced the more traditional brick structure with one that had a contemporary style.”

As computers began to replace typewriters and the building’s infrastructure improved, the library gradually became less focused on just books and information gathering and more of a cultural center for the community. These days, the library hosts book clubs and writers groups as well as art exhibitions, author visits and specialty programs and events tailored to children and families. The institution also offers such services as notarizing, fingerprinting and passports and free WiFi through the use of on-site computers.

Library board of trustee member John Cancelarich said that ever since he moved to Presque Isle in 1962, the library has been an important source of information, informal education and social connections for him. But the biggest reward has been seeing the positive impact that the library’s services have on community members, whether they come to read books or use the internet to apply for jobs and connect with people from across the country.

“It’s the only place where people can come simply to use a computer or just to get out of the cold weather,” Cancelarich said. “There’s more social interactions that happen here than in all of Presque Isle because everybody feels welcome.”

He also hopes that the library can be a bridge between the older and younger generations and inspire a sense of curiosity and wonderment for patrons of all ages.

“Every time I see a mother bringing a small child into the library I congratulate them,” Cancelarich said. “It’s a wonderful thing to expose children to libraries and what they have to offer.”

Many of you have been following Luke's story on our Facebook page. Luke came to the Ark last July with his sister Lydia at 8 weeks old. Both Luke and Lydia were in really bad shape with untreated upper respiratory infection.
Campaign Corner END_OF_DOCUMENT_TOKEN_TO_BE_REPLACED