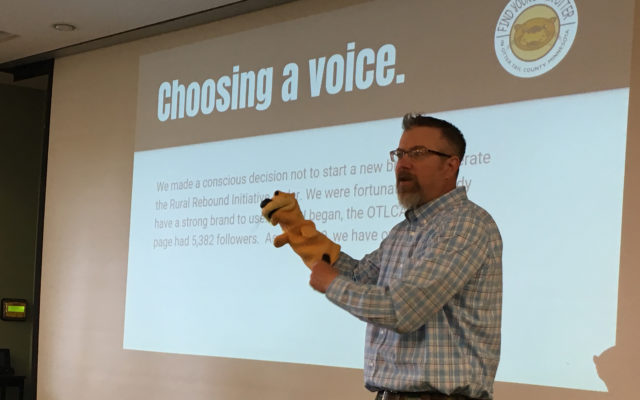 Nina Mahaleris • May 30, 2019
Local business owners and community members alike met on Wednesday at Northern Maine Community College to discuss plans to prevent “out-migration,” and how to attract young people to live and work in The County.

PRESQUE ISLE, Maine — Local business owners and community members alike met on Wednesday at Northern Maine Community College to discuss plans to prevent “out-migration,” and how to attract young people to live and work in The County.

The meeting, which focused on population retention in small communities, soon sparked debate about generational stereotypes of employing a younger workforce.

The conference featured Benjamin Winchester, a Senior Research Fellow at the Center for Community Vitality of the University of Minnesota Extension, and Erik Osberg, the Rural Rebound Initiative coordinator of Otter Tail County.

The visiting lecturers came to Maine as part of the “Brain Gain: Fostering In-Migration in the St. John Valley” conference.

Winchester’s presentation, “Rewriting the Rural Narrative: Speak softly and carry statistics,” focused on changing the negative perceptions surrounding rural living and teaching others how to encourage young people to reside in The County.

Since 2010, population in Aroostook County has declined by almost 7 percent, with the majority of residents being older than 65 years old, according to the 2018 U.S. Census.

“I don’t know if it’s the millennial generation … But we can barely get people to say, ‘how are you’, ‘good morning’… I had people face to face with each other, completely silent … Their communication skills are not good…It’s a constant challenge” Berube said.

In response, Osberg said businesses must focus on their employees’ individual strengths and find opportunities to use those skills to their advantage.

Current Chair of Momentum Aroostook, Ginger Kieffer, appeared to disagree with Berube’s comments. “I think that’s an unfortunate generalization of the millennial generation. We all bring [different] strengths and weaknesses to the table, and that speaks beyond just the denominator of age,” she said.

Kieffer, 24, graduated from the University of Maine Orono in 2017 before moving back to Aroostook County for work.

Winchester said that negative stereotypes about the younger generation of people, millennials included, is part of the problem. “If you want attraction, you need to be inclusive,” he said.

“Number one: Don’t call them entitled. I can’t tell you how disrespectful the language is about this generation … Migration is a function of age.”

He said it’s normal to expect 18-27 year-olds to leave their rural hometowns and explore larger cities. Osberg said it is important to “plant seeds,” meaning that residents should try to encourage younger generations to come back and settle down in rural towns.

“By and large, people would rather live in a rural community — they just don’t know it yet,” said Osberg.

The team from Minnesota made a point to mention that, “rural is changing, not dying.” Winchester said, “Rural looks very different than it did 30 years ago.”

Osberg’s presentation focused on how his community of Otter Tail County responded to a decline in population and the ways the Rural Rebound Initiative is working to improve their own community.

Winchester and Osberg were originally invited to present at the “Brain Gain” conference at Fort Kent on Wednesday but due to low enrollment for the event, it was rescheduled and moved to NMCC in Presque Isle the same morning.

According to its website, the Otter Tail Lakes Country Association, which encompasses the Rural Rebound Initiative, is a “regional non-profit marketing and economic development organization. Our diverse membership is comprised of businesses, organizations, and communities.”

Osberg said that while the problems that Otter Tail County faces are different than those of Aroostook County, residents should consider what barriers are preventing the community from growing.

According to the U.S. Census Bureau, there were 67,111 people living in Aroostook County and a comparable 58,812 living in Otter Tail County in 2018.

He also discussed ways to use resources available to businesses in Aroostook County. He said people can use various marketing strategies and social media to attract people from other parts of Maine. “You don’t need a big fancy camera. … All you need is intent and effort.”

Gulliver said the younger generation of people growing up in Aroostook County need the education and resources that will keep them in the area. He said that schools should be educating students early-on about employment opportunities in The County.

Steve Dobson, who maintains the Aroostook Hospitality Inn in Washburn and is also on the Maine Tourism Association Board of Directors and Officers, spoke to the idea of retaining young people in The County by teaching them about the available opportunities.

“It’s that foundation that you have to build from the ground up,” he said.

Winchester ended the conference on a note of hopefulness for the future of Aroostook County.

“There’s good reason to be positive here,” he said.

For the first time since 2019, there is competition for open seats on the Houlton Town Council
Pets END_OF_DOCUMENT_TOKEN_TO_BE_REPLACED