Lorraine Monfils, Ark Animal Sanctuary • June 5, 2019
As many of you recall back in November we went into a home where the owner had passed away and removed about 15 cats. We were successful in getting them all however there were a few that were very sick.

HOULTON, Maine — As many of you recall back in November we went into a home where the owner had passed away and removed about 15 cats. We were successful in getting them all however there were a few that were very sick. 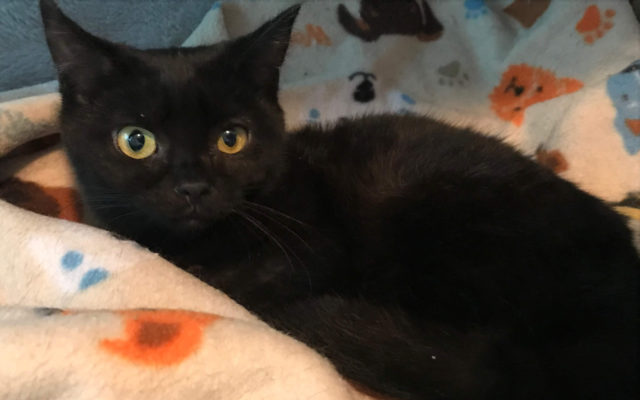 Gracie is an 8-month old stray brought to the Ark Animal Sanctuary that is now battling a rare disease. (contributed photo/Lorraine Monfils)

One had a polyp in throat her that had to be surgically removed so she could breath. Another had a mouth so badly infected that all of his teeth had to be removed. Two of the cats died from Feline Infectious Peritonitis.

Which brings us to Gracie. Gracie was a kitten that was born there and somehow injured one of her eyes. Gracie was living outside and was about 8 weeks old when she came to us. Gracie is now 8 months old and only weighs 3.7 pounds. We always new that Gracie was not a normal little kitty, but nonetheless we all fell in love with her and she soon became one of our favorites. Gracie loves to snuggle and just be held and made over, she is not an active kitty which is not normal given her age, her size is also not normal for 8 months old.  Gracie gets stressed out very easily and likes the security of a warm bed and a small area to live in. She is not adventurous at all.

Last week, Gracie became very ill and could not walk. She was nauseous and had become neurological when we found her that day.  We scooped her up and of course it was after hours and we had difficulty getting in touch with a vet. After much running around and many phone calls we were able to reach one in Florenceville, New Brunswick and even though it was after hours they agreed to see her.

We hit the road running with poor little Gracie. Once at the clinic, the vet took one look and said it wasn’t good. Her eyes were moving in a vertical fashion which wasn’t good at all.  Nothing could be ruled out at this point, but we knew we had to make some hard decisions. The vet said that she needed to make it through the next three days and if she lived there was a chance. The plan was to start a course of antibiotics and meds to see if there was any improvement. Little Gracie was now in a fight for her life.  We left Gracie at the clinic that night knowing full well she may not even make it through the night. Our hearts were broken.

On the first day, Gracie was no worse, but no better. She was being medicated, hydrated and fed. On the second day, Gracie showed some signs of improvement, but was still showing some signs of being neurological.

On the third day, Gracie began eating on her own and was alert, but a long ways from being out of the woods. On the fourth day, after discussing her case with the vet, we are leaning towards toxoplasmosis and will continue the course of treatment. Toxoplasmosis is a disease caused by the parasite Toxoplasma gondii, which can be found in garden soil and raw meat. Cats can get toxoplasma infection by killing and eating infected prey. The disease can also be passed on from cats to humans.

Gracie will remain at the clinic for the next 2-3 weeks because that is where she needs to be. After that time she will be weaned off the meds and we will see what happens.  There are no guarantees and we are going into this with our eyes wide open. Gracie is fighting for her life and we intend to be there for her every step of the way. Please keep Gracie in your thoughts and prayers.

The dog named Diesel that we took in who is 12-13 has been diagnosed with Cushings. We are exploring options for Diesel given his age and not being neutered. His is not an easy case. We want to make him comfortable and happy for the time he has left. He has his new home in place and he is one happy boy for probably the first time in his life. We are discussing his options with the vet so please keep Diesel in your thoughts and prayers as well.

We are looking to do a fundraiser in the upcoming days to help raise money for both of these wonderful souls so stay tuned. If you would like to make a donation  towards their medical expenses checks can be mailed to The Ark, 70 Main St., Houlton, Maine 04730 and please earmark them for Gracie and Diesel.

For all it does to refresh us, burn energy and keep us sharp, we all need playtime, dogs and cats included. Sharing playtime with pets has the added benefit of strengthening the bond between us, so we better understand one another.
Campaign Corner END_OF_DOCUMENT_TOKEN_TO_BE_REPLACED