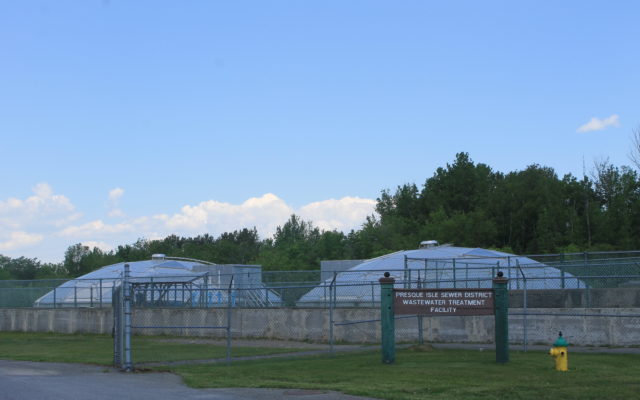 Anthony Brino • June 24, 2019
The Presque Isle Utilities District is waiting for the results of soil tests and a decision by the state government on whether it can continue spreading the sludge from its wastewater, amid a statewide mandate to test treated wastewater for a class of synthetic chemicals known as PFAS -- perfluoroalky and polyfluoroalkyl substances .

PRESQUE ISLE, Maine — The Presque Isle Utilities District is waiting for the results of soil tests and a decision by the state government on whether it can continue spreading the sludge from its wastewater, amid a statewide mandate to test treated wastewater for a class of synthetic chemicals known as PFAS — perfluoroalky and polyfluoroalkyl substances .

In March, the Maine Department of Environmental Protection ordered water utilities to stop spreading wastewater sludge on fields until they tested PFAS levels in sludge and soils where the material is being applied. The state has established an upper limit of 5.2 parts per billion in soil for PFOS — perfluorooctanesulfonic acid– one of the more common PFAS chemicals.

Like other utilities, the PIUD’s treated wastewater is applied to fields as a fertilizer, in what has long been considered an environmentally friendly way to recycle wastewater. The PIUD spreads the sludge during spring, summer and fall on about 300 acres of hayfields on the Lathrop and Reach roads. The fields are harvested by an area farmer and used for livestock bedding, Kearney said.

At the PIUD’s board of trustees meeting on Tuesday, June 18, Kearney said the utility has had its wastewater sludge tested, with the result of 29 parts per billion of PFOS. Now they are awaiting tests of the fields’ soil to determine if the background levels are under the 5.2 parts per billion threshold and can take continued applications of sludge without exceeding it.

“The outcome we’re hoping for is that the background level for these compounds in our soils will be such that we can spread the sludge and it won’t exceed the 5.2 parts per billion,” Kearney said.

The PIUD provides drinking water and sewer services to about 6,000 people in Presque Isle. Their wastewater is treated in an anaerobic digester to remove pathogens at a plant on Dyer Street, and the resulting sludge is stored until it can be applied as a fertilizer.

The plant generates about 10,000 gallons of sludge a week, Kearney said, and the district has the capacity to store sludge for two more months before it reaches capacity. He said he expects the soil testing results to be done well before that, but there are many utilities having similar tests done from a limited number of labs.

“There are other municipalities in Aroostook County that are affected.”

Former military bases such as Loring Air Force Base and the Brunswick Naval Air Station are known to have contamination from PFAS chemicals, in addition to other hazardous chemicals that were used in military aviation.

PFAS chemicals remain prevalent in many consumer goods still on the market, including Teflon cookware and fast food packaging, and those are believed to be a major exposure pathway to humans and how the chemicals end up in treated wastewater, Kearney said.

PFAS chemicals can be removed from drinking water but do not degrade in the environment and have been found in ecosystems around the globe.

The issue of PFAS chemicals in Maine wastewater came to a head this year after high levels were found in the water, soil and milk of an Arundel dairy farm where the farmer had spread utility wastewater and paper mill sludge for decades.

That farm’s issue was brought to light after the U.S. Environmental Protection Agency, as part of a nationwide randomized sampling of utilities, had the Kennebunk, Kennebunkport and Wells Water District test for PFAS chemicals in their drinking water. The Kennebunk utility found high levels of PFAS in their wells, at a rate of 50 parts per trillion.

The U.S. EPA’s recommended limit for PFAS in drinking water is 70 parts per trillion, although some environmental health experts have argued that’s too high. The Kennebunk utility installed new filters at an annual cost of $30,000-$40,000 and now has undetectable levels of PFAS in its drinking water.

With hundreds of Maine farms having applied sludge since the 1980s, the Arundel farm is likely “the tip of the toxic iceberg,” according to Patrick MacRoy of the Environmental Health Strategy Center.

After the findings from the Kennebunk area, Gov. Janet Mills established a new state task force to investigate PFAS contamination issues and develop ways to address them. That came along with the DEP order to stop sludge spreading until tests were done on soils and the sludge.

The state has not issued orders for testing PFAS in drinking water, though that could come in the future, Kearney said.

There is no way currently to remove PFAS chemicals from sludge. Kearney said that if it turns out that the utility can’t spread the sludge, the only alternative in the long-term would be to dewater the sludge and send the solids to a landfill.

The district does not have the ability to dewater sludge now and it would be about two years before it could acquire the equipment, Kearney said. Acquiring that equipment is now a part of the PIUD’s long-term plans for upgrading water treatment, Kearney said.

In other Presque Isle Utility District news, Kearney told the board that progress is being made in the search for a redundant water source. The PIUD has been looking for a backup water supply for almost a decade, as seasonal droughts have put pressure on the utility’s main drinking water source, gravel fed wells abutting the Aroostook River.

The PIUD has an agreement with a landowner to potentially purchase a parcel of land along the Aroostook River and in July will start a range of tests to look for a good site for a well, Kearney said. If the water source is good, the PIUD will proceed with a purchase and sale agreement, Kearney said.

At its next meeting, at 3 p.m. Tuesday, July 16, the PIUD board also will consider a rate increase for its sewer services. Last February, the utility raised its drinking water rates by 11.55 percent, with the average residential customers seeing its quarterly water bills going from $49.13 per 1,200 cubic feet of water to $54.42.