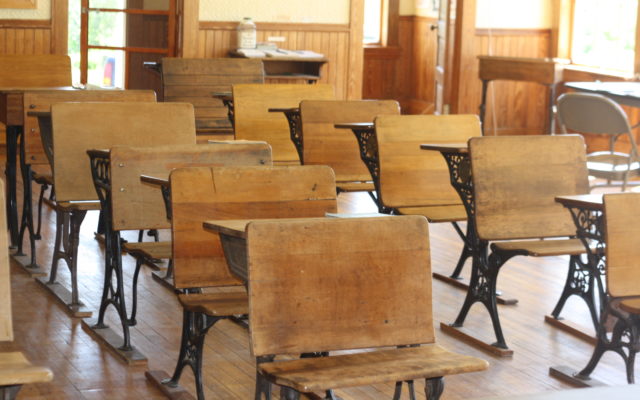 Melissa Lizotte • July 11, 2019
Just minutes from Arnold Brook Lake in Presque Isle sits the James School, a former one-room schoolhouse that community members have preserved for the past three decades as an historical landmark.

PRESQUE ISLE, Maine — Just minutes from Arnold Brook Lake in Presque Isle sits the James School, a former one-room schoolhouse that community members have preserved for the past three decades as an historical landmark.

From 1917 to 1948, it served as the main educational institution for children whose families lived in the area of Presque Isle that includes the Niles Road, where the James School is located, Chapman Road and the Spragueville Road, which leads to the Aroostook State Park entrance.

Martie Pritchard, who has been a member of the James School board of directors for 20 years, said that during the school’s years in operation either the teacher or someone from the community would arrive hours before the students to start a fire in the wood stove.

Unlike modern school systems that typically separate elementary and middle school students, the James School educated more than a dozen students from grades one through eight everyday. But Pritchard noted that the teacher always structured school days in ways that allowed all students to learn.

“There would be one group of students in one area and other groups in other areas based on the level they were at,” Pritchard said, while visiting the James School on July 10. “The teacher pretty much oversaw everyone’s learning and the students would help each other out. The older students often helped teach the younger ones.”

During its years in operation, the James School consisted of one superintendent, a school board and a teacher, who would only serve one year before moving on to a larger school elsewhere. In those days the teachers were always female and had to sign a contract stating that they would not marry during their one-year term. If a teacher were to marry, they would no longer be allowed to teach.

Visitors to the James School will immediately notice items that stand out to modern eyes such as a large blackboard with white chalk, wooden desks, antique grammar and arithmetic textbooks and a replica of a wooden stove that served as the school’s only source of heat. But this particular school was considered more “modern” in the early 20th century due to inside bathrooms and coat rooms for both girls and boys.

“Other one-room schoolhouses in the area had outhouses and coat rooms that were outside. Students would have to run back into the school without their coats on,” Pritchard said.

Typically a community member would give children a ride to school in a horse-drawn wagon. During the winters a unique type of “school bus,” shaped like a small house and placed onto a sled, featured benches and a wooden stove that kept the children warm. Often an older student would drive the sled or “bus,” park the vehicle inside a neighbor’s barn and walk to school in the cold.

Pritchard recalled that many children, including her grandchildren, have asked during tours of the James School, “Where did they have gym class?” and “Where was the cafeteria?” She often has told them that although there were no official gym classes students played games during recess. As for their lunches, students and the teacher often got creative and resourceful.

“Everyone brought potatoes, carrots, squash, onions or a piece of meat from home to make a pot of soup for lunch everyday. The students had their own bowls and spoons,” Pritchard said. “Other children brought sandwiches wrapped up in paper. One student would bring a cold pancake for lunch everyday.”

Over the years Pritchard has interviewed many people who were involved in the James School, including teachers, former students and community members who took part in the restoration project from 1985 to 1987. She hopes to one day self-publish a complete history as well as a children’s book about the school.

After the school closed in 1948 only one other group — the Hillside Gospel Mission — utilized the space. By the early 1970s more people began attending church services in the city and the school fell into disarray. But the crumbling structure soon would have a different future thanks in part to local judge Julian Turner.

In 1985 Turner was sitting in a barbershop when he overheard customers talking about the city’s plans to demolish the James School. City officials were afraid that local children might get hurt if they decided to play there.

“Judge Turner went straight from the barber chair to City Hall to find out who owned the school,” Pritchard said. “He was able to get a court order to stop the demolition while he organized the community to fix the school.”

Around 360 community members donated time and building materials or made financial contributions to rebuild the one-room schoolhouse. Despite having been diagnosed with cancer, Turner, who died in 1990 at age 61, organized a group of community members to work on the structure every weekend for two years. They raised funds to build a new foundation and install new windows and roof shingles and replace floorboards, though most of the original wooden floor beams are still there.

Pritchard likes to call the James School a “hands-on museum” because board members encourage children to sit at the wooden desks, read the textbooks and write on the blackboard. The structure also includes replicas of an outhouse, and water pump that schoolhouse children would have used to obtain drinking water from a well.

The James School is open to visitors 1-3 p.m. every Sunday and is available for people to rent for special occasions. Schools and civic organizations can use the space for free. In the past the board of directors, known as the James School Corporation, has hosted students from local elementary schools for field trips and holiday-themed events.

Pritchard encourages community members to stop in and learn more about the James School.

“It’s one of the few standing pieces of community history,” she said. “You can’t buy experiences like this.”

A few years back the Ark was gifted with something that we never dreamed possible. It is a gift that left us speechless and opened a whole new door for us.
Campaign Corner END_OF_DOCUMENT_TOKEN_TO_BE_REPLACED