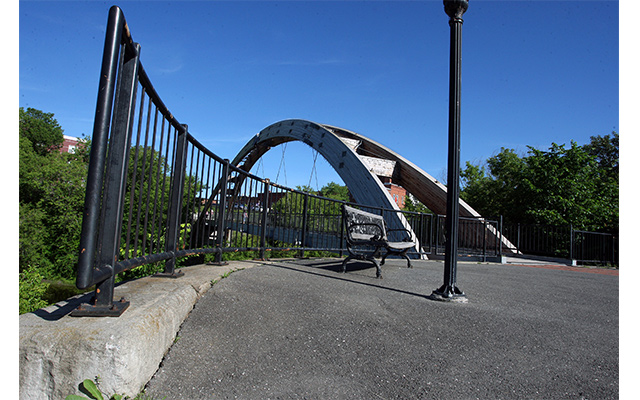 It is a blink-and-you-might-miss-it type of park, and it may just be Houlton’s best kept secret.

Created in 1999, the park has undergone numerous changes over the past 20 years. On Thursday, July 18, the town of Houlton celebrated the completion of Phase III in the park’s development with a special ceremony.

“The Riverfront Committee was appointed by the town council back in 1999,” said Bob Anderson, chairman of the committee. “Alan Bean was our town manager at the time and he was the original chairman. The charge that was given to us was to clean up and develop the Meduxnekeag River and its banks from the North Street Bridge to the Highland Avenue bridge.”

With donations, grants and some taxpayer dollars, the committee raised more than $1 million to fund the construction of the 187-foot Gateway Crossing footbridge, which stretches from the North Street Bridge across the Meduxnekeag River. The Gateway Crossing is designed to give walkers easy access to historic downtown Market Square and the trail along the river. 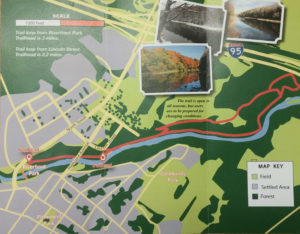 This map shows the addition of a new trail system installed at Riverfront Park. The three-mile loop was spearheaded by Gary Hagan, Paul Callnan and Gary Severson. (Contributed image)

“The cleanup of the river banks, the basic design of the park and the footbridge construction were completed in 2005,” Anderson said. “Since that time, Phase II has been completed and Phase III will be done soon.”

Phase II included extending the walking trail from Riverfront Park to the Highland Avenue bridge, complete with a stairway from that bridge to the trail so walkers could access the park from either direction. Lights were included along the trail so that it could be used both day and night, and to also cut down on vandalism in the park.

Phase II also included the creation of a picnic area, including tables and a canopy so that it can be enjoyed regardless of the weather. An informational kiosk was constructed, complete with brochures showcasing what the area has to offer, and a rain garden was created to help with runoff.

Storyboard signs, designed by former Houlton artist Sue York, were installed throughout the park and have since been expanded to include not only information about Houlton’s history, but also ecological information about the Meduxnekeag River.

Phase III projects have included the installation of restrooms for the park and a small playground for children.
One of the crowning jewels of the Phase III development, however, has been the creation of a three-mile trail that follows along the Meduxnekeag River, extends almost to Interstate 95 and loops back around.

The bulk of the trailwork was completed by Paul Callnan, Gary Hagan and Gary Severson, who embraced a vision of creating a use for the land owned by the Putnam family.

“One of the ideas that I latched onto was creating a trail,” Callnan said. “Wherever I go, I try to find a trail, because my wife and I love to hike.”

The trail is ripe with wildlife as deer, eagles and owls have been spotted in the area.

“What is amazing is you have three miles of a wilderness trail right next to town,” Callnan said. 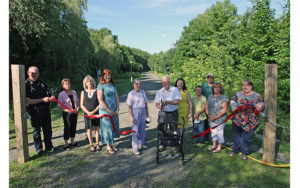 The town acquired an abandoned home located near the Lincoln Street entrance, which it will soon demolish, Callnan said. The property was purchased by the Putnam Trust and donated to the town.

The trail will be open all four seasons, but is off limits to motorized vehicles such as dirt bikes, all-terrain vehicles and utility vehicles. Cross country skiing and snowshoeing are encouraged during the winter months.

“It is wonderful to have this park here,” said Nancy Ketch, Houlton’s community and economic development director. “It is an amazing community asset. It has taken quite a bit on completing it. Completing the park took vision, a group of dedicated people, collaboration, persistence and a fair amount of money.”

Ketch estimated about $1.5 million has gone into the park’s creation and evolution over the past 20 years. The bridge construction alone was close to $1 million.

York, who now resides in Shokan, New York, was on hand for Thursday’s dedication ceremony. She explained her role in creating the storyboards that are located in the park.

“I learned so much about this community that gave me pride and exhilaration to have come from this fine place,” York said. “I wanted to capture that on a graphic, so that others could feel what I did. It’s really a jewel here in the middle of Houlton to have so much nature, so close to the downtown. It allows you to step away from the noise and see an eagle soar by or the fish jump.”

Next year's Caribou City Council will include a new member and a longtime councilor thanks to Tuesday's election.
Pets END_OF_DOCUMENT_TOKEN_TO_BE_REPLACED

Everyone who enjoys the company of a dog knows that sometimes dogs have strange behaviors.  They may arrive in your life with the behaviors already in place, or perhaps they are adopted as a puppy and develop a behavior young.
What's Happening This Week END_OF_DOCUMENT_TOKEN_TO_BE_REPLACED