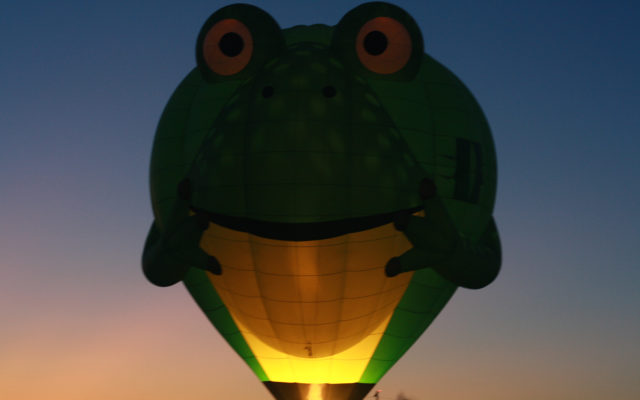 Melissa Lizotte • August 26, 2019
Anyone who looked up at the skies near Presque Isle on the mornings of Friday, Aug. 23, and Sunday, Aug. 25, likely did not expect to see a giant green frog floating above the treetops and across the large, open landscape.

PRESQUE ISLE, Maine — Anyone who looked up at the skies near Presque Isle on the mornings of Friday, Aug. 23, and Sunday, Aug. 25, likely did not expect to see a giant green frog floating above the treetops and across the large, open landscape.

That “frog,” known as “Hyla the Frog,” is the hot air balloon that John Viner, a pilot from North Muskham, United Kingdom, brought to Presque Isle during his first visit to the annual Crown of Maine Balloon Festival held Aug. 22-25.

Hyla is also the name of a small green tree frog that is found in Europe, Asia, Africa and parts of North America. Owning a balloon with such a unique shape and origin gave Viner and his UK-based crew members an immediate way to connect with people during their time in Presque Isle last week.

“Everywhere we’ve gone people have said, ‘You’re the frog people,’” said Viner, who has piloted balloons for the past 20 years. “It’s been great to see people smile and to know that the frog has made them happy.”

Due to strong winds and often cloudy skies, Viner was only able to fly on Friday and Sunday morning. He stayed behind Saturday evening to offer tethered balloon rides at the Northern Maine Fairgrounds. But the setbacks did not discourage Viner, who has come to realize that most festivals are “40 percent flying and 60 percent meeting people.”

Viner learned about the Crown of Maine Balloon Festival through friend and fellow pilot Seth Bailey of Windsor, Nova Scotia, who has brought his balloon, “Czech Mate,” to the event for the past five years. The trip to Aroostook County was also the first time Viner visited the state of Maine, a place he knew only from reading Stephen King novels, and the first time he has been to New England.

While in the “crown of Maine” Viner and his crew members spent much of their time chatting with folks at local stores, festival vendors and the farmer’s market, the latter of which taught them more about northern Maine-grown potatoes. The team of three even stuck around several days after the festival to explore central Aroostook more.

“The people here have been very caring and welcoming,” Viner said. “It’s a privilege to be able to travel around the world and meet new people.”

In the past Viner has flown “Hyla the Frog” and his two more traditional balloons in 25 different countries in Europe and Asia, as well as the Albuquerque International Balloon Fiesta in Albuquerque, New Mexico. Like many pilots who fly in Aroostook County, he was amazed by the vast views of open fields, waterways and small towns below, sights that are not always common elsewhere in the world.

During his balloon flights, Viner not only witnessed the unique landscape of northern Maine but also discovered a different perspective on the communities he had begun exploring.

“When you’re up there you see how the roads actually fit together, despite appearing very ramshackle when you’re on the ground,” Viner said. “The experience of flying is all about gaining a different perspective and watching what’s going on below you. It’s breathtaking.”

Viner hopes to come back to Aroostook County as part of the Crown of Maine Balloon Festival or even on his own to experience the vibrant colors of autumn leaves at their peak. Throughout his future travels, he’ll always carry with him the memories of the festival and friendships he made with other pilots.

But perhaps what he’ll remember most is the smiles that lit up his passengers’ faces, while realizing the joy of flying across the skies in a frog-shaped balloon.

“That experience is a wonderful gift that we can give people,” Viner said.

I was mentioning to our board of directors this past week that I got a quarterly report from a large online retailer who will donate a portion of my purchases to a charity I select.
Campaign Corner END_OF_DOCUMENT_TOKEN_TO_BE_REPLACED