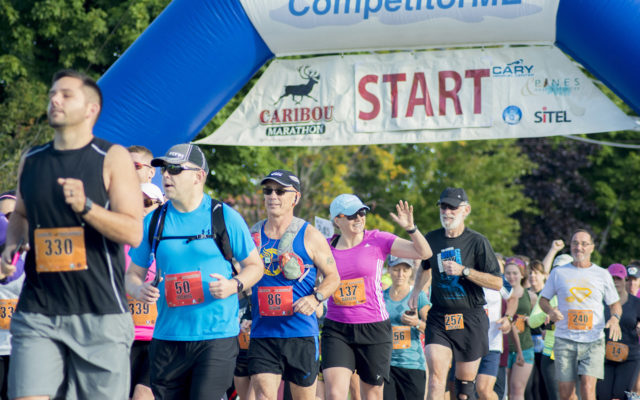 Chris Bouchard • September 16, 2019
Runners from across the United States and beyond competed in the fourth annual Caribou Marathon, held in the country’s northeastern most city. With runners, volunteers, organizers and fans combined, well more than a thousand were in attendance during the Sept. 15 race.

CARIBOU, Maine — Runners from across the United States and beyond competed in the fourth annual Caribou Marathon, held in the country’s northeastern most city. With runners, volunteers, organizers and fans combined, well more than a thousand were in attendance during the Sept. 15 race.

Spencer McElwain of Saco came first in the marathon with a chip time of two hours, 40 minutes, and 18 seconds. Michael Downing of Mount Chase was only about a minute behind and came in second, and the third place winner, Ryan Collins of Portland, was just under a minute behind Downing. 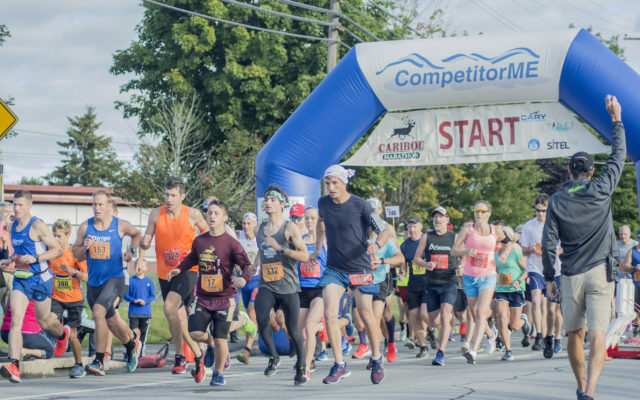 Runners burst out from the starting line during the fourth annual Caribou Marathon on Sept. 15. (Chris Bouchard)

This marks the fourth year in a row that Caribou has held the Boston Marathon qualifying event. Since first hosting the marathon, the route has undergone a few iterations and race organizers say the current route is optimal.

Phil McDonough, a Caribou resident who has participated in all four marathons, said he prefers the current route.

“There’s more scenery,” he said, “and more chances for community involvement. There’s support all along the way, and people are cheering you on all over the place.”

McDonough has been running for more than half a decade, and said he got into it because it was “just something to do.” 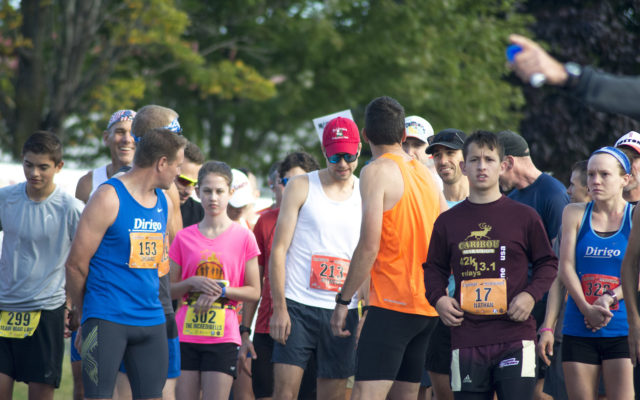 Runners stand ready at the starting line just before the Caribou Marathon commenced at 8 a.m. on Sept. 15. (Chris Bouchard)

“It’s a good way to decompress after the day,” he said, “and to keep myself in shape.”

As far as what motivated him to join the marathon, he said he figured he might as well sign up since it’s “right in my backyard.”

“It’s just a matter of putting one foot in front of the other,” McDonough said.

With the scenic route passing by numerous residences, runners often find Caribou citizens coming out of their homes to cheer them on. Additionally, a series of first aid and water stations were set up all along the route by several community volunteers.

Valerie Waldemarson, a Jobs for Maine Graduates (JMG) specialist who works primarily with students from Caribou High School, volunteered along with 19 National Honor Society students and 12 members of JMG. 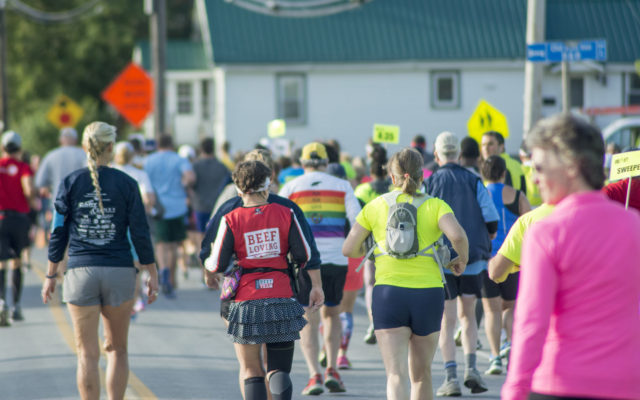 Runners burst out from the starting line during the fourth annual Caribou Marathon on Sept. 15. (Chris Bouchard)

Waldemarson said she and the students have been volunteering during the marathon since it began four years ago under former Caribou Marketing and Events Coordinator Lydia Kieffer, adding that it’s a great opportunity to interact with the community.

With marathon racers running a total of 42.195 kilometers, several volunteers are needed along the route. Waldemarson said she and her students have split up into different teams to handle various needs during the race.

“We have some students directing traffic and to help runners stay on the course, because many of them are not from the Caribou area.” she said. “Others are handing out water and nutritional supplements. And some students are just out there being cheerleaders for the runners and encouraging them.”

The JMG Specialist said several Caribou High School staff are participating in the race, which gives students an opportunity to cheer them on.

“It’s exciting to see our teachers, counselors and administrators out here running,” she said. “They cheer for our kids each day, and now the students can cheer for them.”

According to Caribou Marketing and Events Coordinator Christina Kane-Gibson, close to 700 were involved with the race when combining runners, volunteers and city officials such as the police department.

In the hour leading up to the race, runners convened at Caribou Wellness and Recreation Center on Bennett Drive and picked up their packets, which included their bibs, shirts and information about the race.

“It’s a super busy time,” Kane-Gibson said less than 10 minutes before the race began. “The racers are just chatting and meeting each other. We have 16 states and three countries represented here today. So people from all over are getting to know each other and bond over having that common goal.”

The Caribou Fire Department held a brief flag ceremony featuring a performance of The National Anthem, and just minutes later the marathon runners burst from the starting line and began the race at 8 a.m..

Both Waldemarson and Kane-Gibson said they hope the marathon continues.

“It’s a wonderful event,” Waldemarson said. “I hope it stays here for years to come. We like being out with the community and the kids enjoy it because they get to see their teachers, friends and family out there doing something they love.”

“This is becoming such a favorite for the community,” said Kane-Gibson. “When you’re out here, you really feel that community pride, and I think the runners bring it out too. Everyone is out there supporting each other.