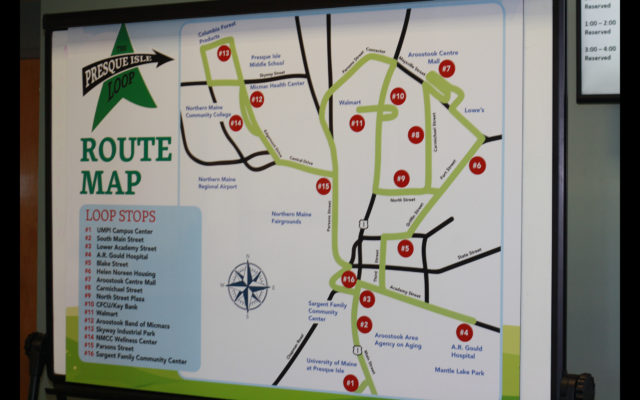 The Going Places Network is a collaborative effort between multiple agencies and organizations including Aroostook County Action Program, United Way of Aroostook, SAD 1, Aroostook Council for Healthy Families, the city of Presque Isle and Aroostook Agency on Aging, among others. 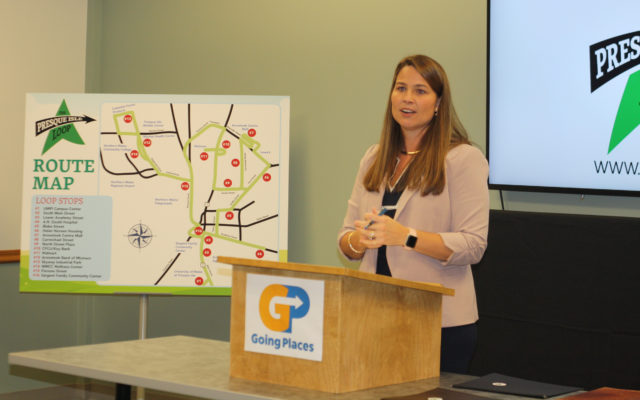 LeRae Kinney, co-chair of the Going Places Network, announces details of the route for the new PI Loop bus service during a press conference at ACAP on Wednesday, Sept. 18. (Staff photo/Melissa Lizotte)

Last year the group began, through funding from Maine Community Foundation, to assess what the biggest needs are for families with young children in Aroostook County. ACAP’s most recent community assessment, conducted in 2016, had already found that transportation was perceived to be the biggest challenge people faced in The County, ranking even higher than substance use challenges.

The PI Loop will begin as a four-month pilot project on Tuesday, Oct. 15, with 16 bus stops in designated locations throughout Presque Isle. Initially the schedule will be from 6 a.m. to 8 p.m. Monday through Saturday and from 8 a.m. to noon and 1 to 5 p.m. on Sunday.

On Nov. 1, the Going Places Network will release an adjusted schedule based on feedback from community members and network partners.

The metro-style bus, operated by Aroostook Regional Transportation System, will provide rides for everyone in the community, with the first two weeks of the service being free for all.

After that period, bus tickets will cost $1.75 for a one-on, one-off stop or $3.50 for a round trip. Children ages 5 and under can ride the bus for free with a parent or guardian. Discounted rates will be offered to people ages 18 and under and 60 and older, as well as to military veterans and their spouses with an ID and people with mobility disabilities.

Frequent bus passengers also have the option of purchasing a GoPass that will allow them unlimited riding for 31 days at a cost of $72 or seven days for $18.

“The purpose of this route is to provide all community members reliable access to the educational, retail, medical, employment and other services they need,” said LeRae Kinney, Going Places Network co-chair, during a press conference at ACAP on Wednesday, Sept. 18.

The beginning of the PI Loop will be the U-shaped parking lot of the University of Maine Presque Isle’s Campus Center, with the bus then heading to the plaza on Main Street that contains Big Cheese Pizza, Aroostook Agency on Aging and the Central Aroostook Association. The next nearby stops will be the south end of Academy Street — across from the entrance to Second Street — followed by the space behind the Giberson House at Northern Light A.R. Gould Hospital.

From there the bus will ride down Academy Street, turn right onto Blake Street and stop at the parking lot of the former Cunningham Middle School. Subsequent stops in that area will include the entrance to the Helen Noreen Housing, the Aroostook Centre Mall and Carmichael Street, located near the Presque Isle Housing Authority.

Kinney noted that although the Lowe’s parking lot near the mall is not an official stop on the route, the bus will still be able to stop there if riders need to get off.

“That location is an ideal one to meet peoples’ needs for both retail and employment,” Kinney said.

After Carmichael Street the bus will stop at the North Street Plaza, the location for North Street Healthcare, Northern Light Dialysis, Pat’s Pizza and other businesses. The driver will then take passengers to the area that hosts the County Federal Credit Union, KeyBank and the Hampton Inn, stopping in between the two banks, before heading across the intersection to Walmart.

The remaining stops on the PI Loop will include the Aroostook Band of Micmacs community center, the area near Skyway Street, the Smith Wellness Center at Northern Maine Community College, the region near Winnie’s Restaurant on Parsons Street and the Sargent Family Community Center. The bus will then arrive back at UMPI to begin the loop again.

Jamie Chandler, Going Places Network co-chair, noted that the network is conducting a feasibility study with the Maine Department of Transportation to determine what future changes might be required to the bus route, schedule and/or fares. The study will also help the group decide where to place ticket booths, shelters for passengers and which locations are most accessible during the winter months.

“There will be adjustments as we go through the initial phase of the route,” Chandler said. “We encourage people to give us feedback on what stops they think work and even which ones we might change.”

Caribou-based Sweden Street Software and Consulting will launch an official website and mobile app for the PI Loop, which will include updated routes, schedules, fare prices, alerts on potential route delays and the ability for folks to track the bus’ current location, within the coming weeks. The bus is in Fort Kent undergoing installation of the exterior wrap and graphics.

On Tuesday, Oct. 1, the Going Places Network will host a launch party for the PI Loop. Beginning at 4 p.m., the bus will pick up passengers at the 16 stops for the inaugural ride and end at the Sargent Family Community Center for a launch party. Anyone interested in reserving a spot on the inaugural ride should contact Gloria Duncan at gduncan@acap-me.org.

For the first time since 2019, there is competition for open seats on the Houlton Town Council
Pets END_OF_DOCUMENT_TOKEN_TO_BE_REPLACED