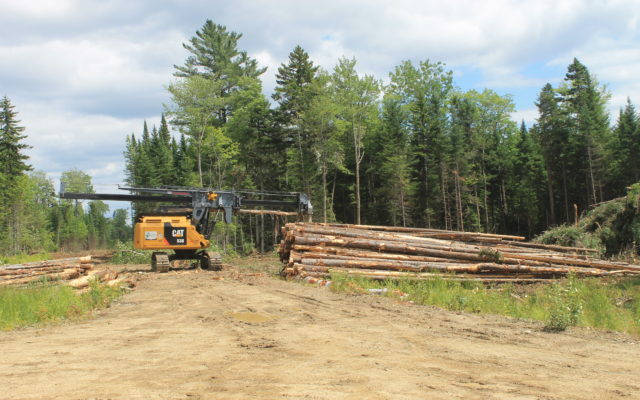 Anthony Brino • September 24, 2019
Late summer is the time of year when young spruce and fir tree plantations are treated with herbicides sprayed from helicopters to control competing growth of other trees and shrubs.

ALLAGASH, Maine — Late summer is the time of year when young spruce and fir tree plantations are treated with herbicides sprayed from helicopters to control competing growth of other trees and shrubs. By August, the needles on spruce and fir trees have hardened off, which gives them a natural resistance to herbicides like glyphosate, the main ingredient in Roundup.

This past spring, Maine Senate President Troy Jackson, D-Allagash, led a bill to ban “aerial herbicide spraying for the purpose of deforestation.” The bill evolved into legislation, signed by Gov. Janet Mills, requiring the Maine Board of Pesticides Control to conduct a report on the practice of using forestry herbicides due out in February 2020.

“Working in the woods most of my life, we didn’t used to have this aerial herbicide spraying and I would say the forests grew fine or probably better than under this spraying,” said Jackson, 51, a fifth-generation logger.

Jackson’s effort to ban aerial forestry herbicides rekindled a debate over how Maine’s working forests are managed and the practices of clear cutting and replanting spruce and fir plantations.

He said he’s hoping that the bill to study the issue will continue the conversation and bring in people who work in the industry and live around the forest sites that are sprayed.

In 2017, more than 12,000 acres of Maine woodlands were treated with herbicides while 22,722 acres of trees were harvested through clear cutting, with more than 7,000 of those acres in Aroostook County, according to the most recent Maine Forest Service report.

This fall, Jackson said he’s planning to have the Legislature’s Joint Standing Committee on Agriculture, Conservation and Forestry tour northern Maine woodlands treated with herbicides and hold a public hearing.

“I’ve met with the industry and told them, ‘I don’t have any problem with you taking them to areas that you want them to see. But I also want them to see areas that have been sprayed,’” Jackson said. “If the majority of people want to see this continue, then fine. But I want to make sure people’s voices are heard.”

The bill to ban aerial herbicide spraying was opposed by the Maine Forest Products Council, which represents the industry and its large players, including the Irving and Weyerhaeuser companies that both use aerial spraying.

Irving, Maine’s largest forest landowner with some 1.3 million acres, uses herbicide treatments in its young conifer plantations in Maine and Atlantic Canada. According to a fact sheet from the company, less than one percent of the land the company manages is sprayed each year.

On average, less than 15,000 acres of woodlands are treated with herbicides annually, according to the Maine Board of Pesticides Control’s testimony to the Legislature.

“It’s an important tool. It isn’t used on every acre, but it’s a tool you want to have,” said Patrick Strauch, executive director of the Maine Forest Products Council. “We don’t indiscriminately use this tool.”

Strauch said the practice of using forestry herbicides has been in use in Maine since at least the 1970s, when the spruce budworm led to large-scale salvage logging of mature spruce and fir stands. “When you open up a forest, you can get all sorts of things. You get trees you may want, trees you might not want and raspberries.”

Today, it is less used than in decades past, but crucial to keeping softwood stands highly productive, Strauch said.

“We’re like farmers, we just have 70-year rotations instead of annual rotations.”

Forestry herbicides are also used as a tool for controlling the vigorous sprouting trees of beech trees suffering from beech bark diseases, which can colonize areas to the detriment of other hardwood species like maple, Strauch said.

“I think you’ll find the forestry industry is a good practitioner,” he said of preventing drift and water runoff with aerial herbicide applications.

“We have rules that are more stringent than agriculture and the lawn-care industry. We have colleagues in agriculture who are using these chemicals every year and doing it well, as well as homeowners. The exposure to the public is greatest in other areas.”

Strauch said he uses herbicides occasionally around his home and also used them as a Christmas tree grower.

“It’s all about being smart, cautious, obeying the label and using them appropriately.”

The most common herbicides used to treat competing vegetation are glyphosate, imazapyr, sulfometuron methyl. Those and other herbicides and pesticides are used routinely in Maine agriculture as well as in residential and some public settings.

Jackson said he draws a distinction between agricultural chemicals and forestry herbicides, as the former is done primarily through ground-based applications within a field. Noting the high-profile lawsuits over glyphosate and cancer, he also said that the human and environmental health implications of many pesticides remains subject to research and debate.

“In the legislation I proposed, they could still do on-the-ground applications,” he said of the forest herbicides. “I don’t like it on the ground, but you could at least make the argument that there’s no overspray into other people’s land or water, or at least less chance of it.”

During his career, Jackson recalled working on logging sites near clearcuts that were being sprayed.

“I can remember three occasions when I was working where the helicopter turned within sight of me. I never got sprayed but they were close and I remember moose running out from where they were spraying. There’s no way to say the animals aren’t getting this stuff put on them.”

“I always generally didn’t like it. But more and more people discussed it with me and told me how much they don’t like it.”

The province of Quebec banned pesticide use in government-owned forests in 2001 and some Maine municipalities have also taken it upon themselves to regulate both agricultural and forestry pesticide use. In 2004, Jackson’s hometown of Allagash voted to ban all forestry herbicide use, including ground application.

Jackson said he worries that forestry spraying represents a larger problem with Maine’s forest products sector being too dependent on dimensional lumber markets. If he were managing regeneration in a recent clearcut, Jackson said he’d look to promote a mix of high-value hardwood species.

“The whole state may be too reliant,” Jackson said. “We’re not value-added driven. Value-added on a lot of these things would be a lot better for the workers and the state of Maine.”

Strauch of the Maine Forest Products Council argues that there are strong markets for both hardwoods and softwoods, but that softwood lumber represents a particularly strong opportunity given the productivity of managed softwood stands.

“We’re in that northern temperate zone where softwoods grow really well. We can’t grow quality black walnut or black cherry like other areas can. To get the most out of our forests, I think we have tremendous potential in our softwood resources when we look at the volumes per acre.”

Strauch said he sees opportunity in diversifying the softwood market with the likes of cross-laminated timber construction, where engineered wood panels can be used in buildings up to 16 stories tall in place of steel and concrete.

“We’re looking at diversifying that softwood market with cross laminated timber. We’re going to see demand for wood increase. People like the idea of growing the materials that are put into their homes.”

For all it does to refresh us, burn energy and keep us sharp, we all need playtime, dogs and cats included. Sharing playtime with pets has the added benefit of strengthening the bond between us, so we better understand one another.
Campaign Corner END_OF_DOCUMENT_TOKEN_TO_BE_REPLACED