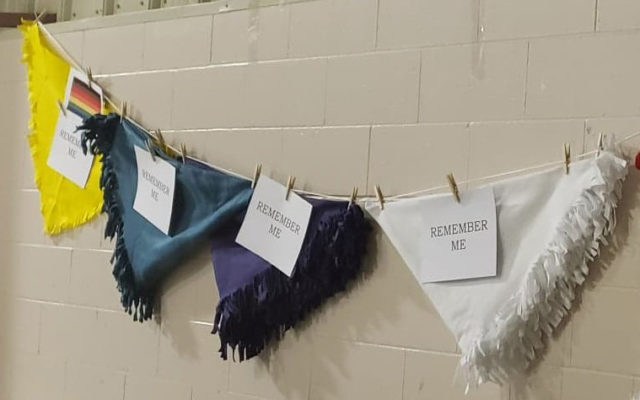 Jen Lynds • October 11, 2019
A sizable crowd gathered at the Houlton Band of Maliseet Indians gymnasium on Wednesday evening to honor the survivors of domestic violence and mourn those who have been lost.

HOULTON, Maine — A sizable crowd gathered at the Houlton Band of Maliseet Indians gymnasium on Wednesday evening to honor the survivors of domestic violence and mourn those who have been lost.

The 22nd annual event was held in recognition of National Domestic Violence Awareness Month, and included speakers, an annual candlelight vigil and a public supper. It was organized by the Maliseet Domestic and Sexual Violence and Advocacy Center.

Four out of five Native American women experience violence in their lives, according to a report by the National Congress of American Indians.

Jessica Huff, program director/advocate for the Maliseet Domestic and Sexual Violence Advocacy Center, said the mission of the agency is to effect change within the tribal community, where equality, respect and nonviolence become cornerstones of all relationships.

Featured speaker for the second year in a row, Houlton Police Chief Tim DeLuca offered statistics on domestic and sexual violence, saying that each year, one in 15 children live in homes in which one of the parents or the parent’s partner abuses the other adult. He added that 90 percent of such children are eyewitnesses to the violence, according to the Maine Coalition To End Domestic Violence.

He said it was the mission of the Houlton Police Department to remain committed to the victims of domestic violence.

“Domestic Violence is a very serious topic,” he said, and one that impacts every community across the state and the country.

According to the Maine Coalition to End Domestic Violence, a domestic violence assault is reported to law enforcement every two hours and five minutes.

DeLuca stressed the importance of solving the problem before it occurred. “Reactive is late, proactive is early,” he stressed.

One of the featured speakers who volunteered to address the crowd detailed being battered by her former partner. She urged parents in the crowd to ask their daughters who they are dating and if they are being abused by their partners. She detailed being burned with cigarettes by her partner, having her hair pulled and being emotionally abused.

Another speaker discussed being sexually assaulted by her partner as a teenager and not even realizing what had really occurred until years later. She talked about still feeling “pain and embarrassment” even though she is years out of the relationship.

More than 83 percent of American Indian and Alaska Native adults have experienced some form of violence in their lifetime, including psychological aggression or physical violence by intimate partners, stalking, or sexual violence, according to the National Institute of Justice.

For all it does to refresh us, burn energy and keep us sharp, we all need playtime, dogs and cats included. Sharing playtime with pets has the added benefit of strengthening the bond between us, so we better understand one another.
Campaign Corner END_OF_DOCUMENT_TOKEN_TO_BE_REPLACED