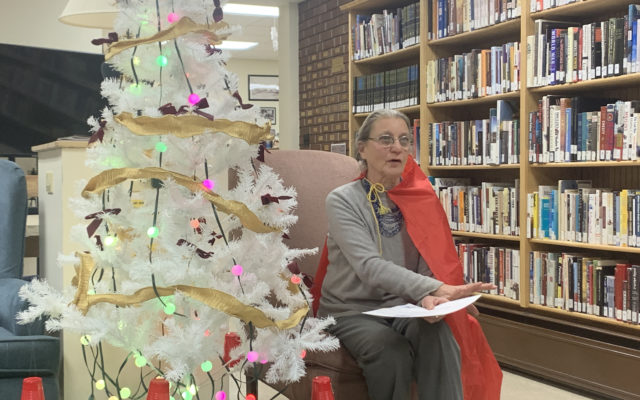 Mars Hill teacher for decades reflects on past, present in library event

David Marino Jr. • December 2, 2019
On Tuesday, Nov. 26, the Walter T.A. Hansen Memorial Library in Mars Hill held another installment in its Hometown Heroes series, this time showcasing a teacher whose work in the community spans decades.

MARS HILL, ME — On Tuesday, Nov. 26, the Walter T.A. Hansen Memorial Library in Mars Hill held another installment in its Hometown Heroes series, this time showcasing a teacher whose work in the community spans decades.

Robin Barker taught English at Central Aroostook Junior-Senior High School for more than 40 years, from 1969 to 2013, during which thousands of students came through her classroom.

Barker said that a career in education was the only one she had ever considered. She had had dreams of being a teacher since her own time in grade school; she used to set her dolls up as if they were in a classroom, pretending to teach them lessons.

“This was the perfect position to be in life,” she thought of teaching during her youth. “This is how you give to other people.”

For Barker, it was her connection to students that kept her going for so long. She acknowledged that education is a field with little pay and often long hours. Yet, she said the ability to make a difference in the lives of young people made it worth it.

She continues to keep up with many of these former students, seeing them grow as they build careers and families.

“I see so many kids that I am so proud of,” Barker said.

Barker, wearing a red cape as part of the Hometown Heroes theme, stood next to a glistening white Christmas tree. An audience of about seven, primarily former students, greeted her. She interacted with them throughout the event, with the audience asking several questions about her teaching career.

She said she realized she had been teaching for a long time when she started to tell students about family members who sat in the same classroom.

As she grew older, she thought more about retirement: she feared staying in the game too long, and teaching beyond her “position.” She had seen too many teachers who had done precisely that. With that fear in mind, she retired in 2013.

Barker still keeps active in the community, including working on historical work at a local cemetery in nearby Bridgewater. She also still presents scholarships at Central Aroostook high school graduations.

Barker said that her favorite books to teach students were the works of William Shakespeare, especially “Macbeth,” though she acknowledged, with a laugh, that students weren’t always as excited about the 16th century-born playwright as she was.

Mars Hill resident Janice Footer said she came to the event to see Barker again, her English teacher throughout the late 1970s.

Footer had nothing but praise for Barker, who she described as “respected” by students and staff alike, and among the most outstanding teachers she had ever had.

“She was a role model,” Footer said. “Making you the best person you ever could be.”

The Walter T.A. Hansen Memorial Library in Mars Hill holds a Hometown Heroes event on the last Tuesday of every month. The event drives home the message that many of society’s heroes perform heroic duties with little fanfare.

“We pick a hero from the towns that we serve who made a difference in people’s lives,” Hansen co-librarian Amber Wood said.

Despite the title of the event, Barker said that she did not believe what she did over the course of her career was especially heroic.

“I don’t think of myself as a hero, Barker said. “For 45 years, I did something that I loved.”