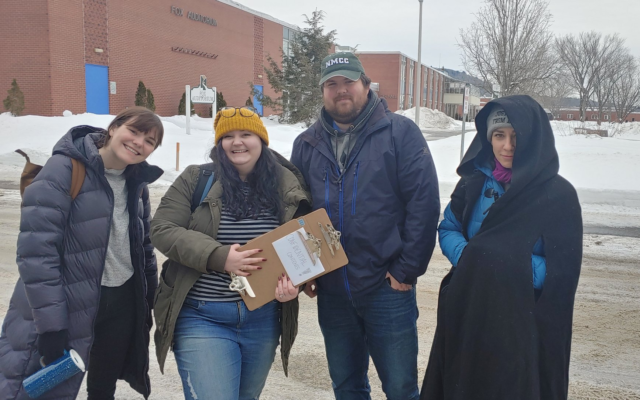 National progressive organization works to register students across The County

David Marino Jr. • February 20, 2020
One national progressive group is on an unrelenting quest to register as many young people in the 2020 election as possible in key battleground states.

PRESQUE ISLE, Maine — One national progressive group is on an unrelenting quest to register as many young people in the 2020 election as possible in key battleground states. And its advocacy for the interests of young Americans has brought it from the deserts of Arizona all the way up north to Aroostook County.

Keanna Daniels of Presque Isle is one of six full-time field organizers working to register 18 to 35-year-olds on college campuses across the state for NextGen Maine, the state affiliate of the national group NextGen America. Daniels does not constitute the only County representation in NextGen Maine: Daniel Sipe, who was raised in Presque Isle but now resides in Portland, is the group’s organizing director.

While Daniels acknowledges that Aroostook County has a reputation for conservatism, she called County residents “open-minded.” She said young people in Portland and Presque Isle have far more in common than some may presume.

“I don’t think they are that much different, even if we are a little bit more rural,” Daniels said. “Our generation as a whole — we care about the same things.”

The issues she and the rest of NextGen Maine focus on are varied but primarily relate to economic issues they said profoundly affect young people: fighting climate change, creating a more equal healthcare system, raising the minimum wage and developing affordable housing.

Though many of these policies are complex, Daniels said interest on college campuses was not limited to those who are already politically active. She has seen just the opposite in her time traveling to University of Maine at Fort Kent, University of Maine at Presque Isle and Northern Maine Community College.

“Students up here care a lot, even the ones who have not necessarily been politically involved,” Daniels said. “They still want their voices heard.”

Some might be surprised that a national political organization would devote such efforts to organizing in sparse Aroostook County, currently estimated by the U.S. census data to contain about 67,000 people.

Sipe said the inclusion of Aroostook County in the group’s ground game reflects a broader desire to get young people engaged, even in areas that are traditionally considered more conservative.

“We’re focused on hitting every corner of Maine that has young people,” Sipe said.

NextGen Maine Press Secretary Elizabeth Rosen said one of the primary reasons NextGen America decided to begin a ground game in Maine was the 2020 Senate election.

Republican U.S. Sen. Susan Collins, a Caribou native who faces a tough re-election fight, is controversial in Maine for her votes to acquit President Trump in his impeachment trial and to confirm Supreme Court nominee Brett Kavanaugh.

But organizers said the presidential election is also playing a big role in their get-out-the-vote effort. Members of NextGen Maine said they hope to capture all of Maine’s electoral college votes for whoever the Democratic nominee is in 2020.

As the group wages a battle against young voter apathy, Sipe said increasing voter registration and turnout would create a domino effect that could help create more civically engaged young people across Maine.

“They don’t feel listened to. The issues that we are talking about as young people aren’t being taken up by politicians,” Sipe said. “When we vote, the issues that we care about get solved.”

It was a freezing day across The County, but you could hardly tell from the turnout. Even after a massive surge in absentee ballot requests across the Central Aroostook area, droves of people came out to vote in Presque Isle, Mapleton, Washburn and Fort Fairfield.
Pets END_OF_DOCUMENT_TOKEN_TO_BE_REPLACED