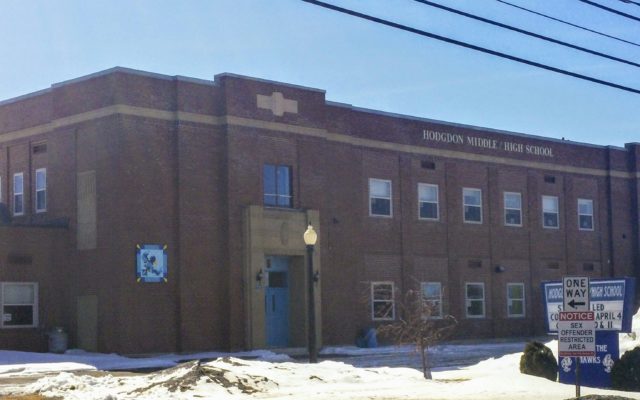 Joseph Cyr • March 11, 2020
With the start of the spring sports season just a few weeks away, the SAD 70 school board is revamping its eligibility requirements for student athletes.

HODGDON, Maine — With the start of the spring sports season just a few weeks away, the SAD 70 school board is revamping its eligibility requirements for student athletes.

The school board unanimously approved on Monday, March 9, changes to its co-curricular eligibility requirements to eliminate a loophole that was being exploited by some students, according to school officials.

Under the old policy, a student can fail a course and still participate in a sport or co-curricular activity at the school.

“Right now we have two grade checks per trimester — at the mid-quarter and at the end,” explained Matthew Oliver, principal of Mill Pond School. “If a student is failing one grade at the mid-quarter, they can play without restrictions. If they are failing more than one grade, they are ineligible to play sports.”

Oliver said in some cases, students know they can fail one course, so they make no attempt to improve their grades in that particular course.

“It doesn’t happen very often, but they know they have that option,” he said. “What we are suggesting is that we make our policy more rehabilitative and less punitive. Let’s make it so we are ratcheting up the bar where we don’t accept any failures, by providing lots of support so the student achieves passing marks in all of their subjects.”

The district’s new policy offers a “three-step academic improvement process,” according to Superintendent Steve Fitzpatrick, for any students who have not achieved a grade of 70 or higher in every course.

The first step is a two-week academic warning period when students are allowed full participation, but at the end of the two weeks, all grades must be passing in order to continue playing.

The second step is academic probation, where students may continue to practice with their team, but are not allowed to participate in games or performances until all of their subjects are at a level of 70 or higher.

The third step is academic disqualification, where any student who has not improved grades to 70 or higher after the four-week period are ineligible to play for the remainder of the season.

“This will give the students a great incentive to pass all of their subjects, work hard and not give up or write off a course,” Oliver said. “This new policy will totally prevent students waiting until the 11th hour to try and cram in all of their assignments before a grade check so they can remain eligible.”

In addition, students that fail a subject in the spring will see disciplinary action carry over into the fall season for the next school year.

“We feel this new policy really gives the students a lot of motivation that if they really want to play a sport, to do well in school,” Oliver said.

So how does SAD 70’s new plan compare to others in the region?

In RSU 29 (Houlton), students may fail no more than one subject to be eligible to participate in co-curricular/extracurricular activities. Students may be reinstated when mid-term grades are issued, providing they are passing all subjects. Reinstatement is only effective when agreed upon by the principal and coach or adviser of an extracurricular program. An incomplete grade acts as a failure and the student is ineligible until the work is made up and the grade is officially turned in.

If students are ineligible during tryouts/auditions/selections for an activity, they are not allowed to participate in the activity.

According to the RSU 39 (Caribou Middle-High School) policy, any student who fails one class in a quarter maintains eligibility, but is placed on academic probation for four weeks after the ranks close.

Any student who has not filed the academic plan for success with the athletic office within five days of notification of academic probation will be deemed ineligible. At the end of the four-week probationary period, the student must be passing all classes in order to maintain eligibility.

Any Caribou student with incompletes past the four-week probationary mark of the quarter is deemed ineligible for that quarter.

At RSU 89 (Katahdin Middle-High School), the district uses a standards-based grading system to determine eligibility, according to Superintendent Marie Robinson.

The district’s policy states, “all students who have earned a standards-based grade-point average [GPA] of 2.5 or higher on academic standards and have earned a standards-based grade-point average of 3.0 or higher on habits-of-work standards, per class, during the preceding grading period [report cards and progress reports] will be considered eligible to participate in interscholastic athletics and co-curricular activities offered.”

But any student who achieves below a 70 in any class will be considered ineligible and will be placed on a 10 school day probationary period, during which the student is not allowed to practice with the team, compete in games or travel with the team until academic progress is demonstrated and the eligibility criteria satisfied.

“Students who are determined to be ineligible shall be placed on academic probation and offered intervention assistance,” RSU 50 Superintendent Jon Porter said.

He said the district wants to give students every opportunity possible to meet the academic requirements that qualify them to participate in extracurricular activities.

SAD 27 (Fort Kent) also follows a standards-based system for assessing students, using the 1-4 grading system. A grade of 4 means the student exceeds expectations, whereas a 1 means the student has shown little to no signs of mastering the content.

According to the district’s policy, students must show “Demonstrated proficiency on the school’s academic and habits-of-work standards. Proficiency toward graduation, as defined by state statute, must be demonstrated in the eight content areas and the Guiding Principles of the Maine Learning Results.”

Any student not meeting the eligibility requirements will develop a personalized intervention plan, which will help them get on track to demonstrating proficiency on all expected standards by the end of a course, learning experience or grade level.

Students in this district are evaluated at the start of every activity and every two weeks thereafter for the duration of the sport season or co-curricular activity.

It was a freezing day across The County, but you could hardly tell from the turnout. Even after a massive surge in absentee ballot requests across the Central Aroostook area, droves of people came out to vote in Presque Isle, Mapleton, Washburn and Fort Fairfield.
Pets END_OF_DOCUMENT_TOKEN_TO_BE_REPLACED