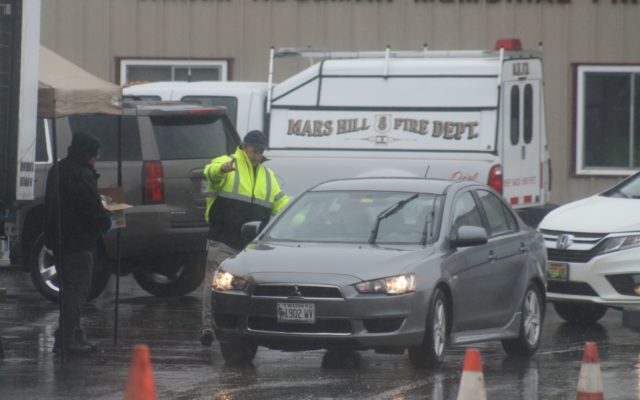 Potato company to give away 5,000 food boxes across The County

MARS HILL, Maine — The Mars Hill-based Pineland Farms Potato Company is giving out 5,000 free boxes of food at various locations across The County.

The program began on Monday in Mars Hill.

The “Drive Thru Box of Food Giveaway” will provide additional food from 10 a.m. to 2 p.m. at the St. Agatha Catholic Church on Tuesday, April 14; the St. Louis Catholic Church in Fort Kent on Wednesday, April 15; St. Mary of the Visitation Church in Houlton on Thursday, April 16; in the former Kmart parking lot at the Aroostook Centre Mall in Presque Isle on Friday, April 17; and the S.W. Collins Home Design Center in Caribou on Monday, April 20.

Pineland Farms Potato Company Plant Manager Shawn Lovley said his company decided to contribute food after seeing how hard the COVID-19 pandemic had hit many people. Many in Maine have become unemployed or furloughed since the beginning of the crisis.

“We’re really doing this to show that we want to be part of the community,” Lovley said. “And we know that food is an issue.”

On a rainy Monday morning, dozens of cars lined the streets outside the Mars Hill Fire Station, where staff and volunteers distributed food. 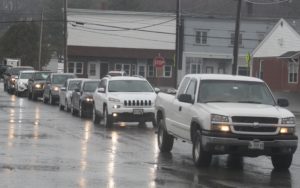 Lovley said he gave out just shy of 500 parcels on Monday, a turnout he described as significant, but predictable knowing the need many have right now.

In the next week, he said the food would be given out by a mix of Pineland employees, including himself, and local volunteers. On Monday, he said Central Aroostook Chamber of Commerce Executive Director LaNiece Sirois assisted in the effort.

Lovley said that Pineland management had initially provided the boxes to the plant’s employees in late March. They received such a warm reception from staff, he decided that it could be a way to help the public during a time in which many people are unemployed or furloughed.

The effort is part of a far larger one by Pineland Farms’ parent company, Bob Evans Farms, who has sponsored food giveaways in various places, including Texas, Ohio and Michigan.

Lovley said Pineland Farms Potato Company had initially ordered 2,500 boxes of food to distribute across The County. Seeing the massive turnout from across the country from other locations, it ordered the required supplies for another 2,500 boxes on Friday.

Along with the food, each box also contains a variety of recipes that recipients can cook from the provided supplies, including quiche, potato pancakes and egg salad.

One parcel of food will be available per car on a first-come, first-served basis across The County. Pineland Farms is asking residents not to leave their vehicles as they receive the food.

Forbidden foods for our four-legged friends are many and can be very dangerous if ingested. Sometimes, we give our pets leftovers or what we consider treats. According to many sources, some human foods can make an animal very sick, and in certain cases can even be lethal.
What's Happening This Week END_OF_DOCUMENT_TOKEN_TO_BE_REPLACED