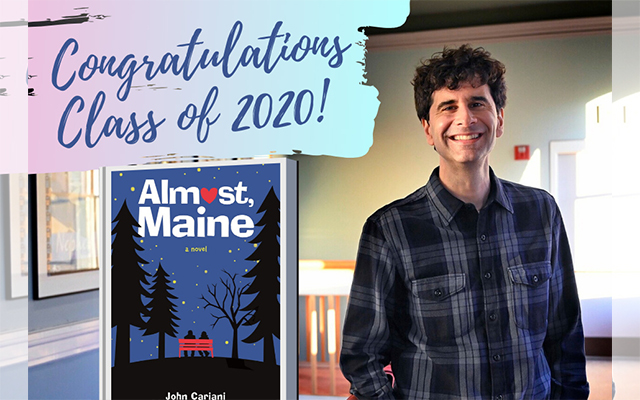 Company to give book to high school seniors

Contributed • May 27, 2020
Barresi Financial Inc. of Presque Isle has announced that they will donate a special book to all Aroostook County High School Seniors as a graduation present.

PRESQUE ISLE, Maine — Barresi Financial Inc. of Presque Isle has announced that they will donate a special book to all Aroostook County High School Seniors as a graduation present.

“We wanted to do something for this senior class that is missing out on so many of the traditional final high school year events and festivities,” said Scott Violette, partner at Barresi Financial.

“I recently purchased John Cariani’s new book, Almost, Maine, for my daughter and thought it might be nice for others to enjoy a book from a graduate of Presque Isle High School,” he said.

Violette contacted the author, who was enthusiastically supportive of the gesture and arranged a bulk purchase through the publisher.

John Cariani, although not born in Presque Isle, moved here at a young age and graduated from Presque Isle High School. He is a Tony Award-nominated actor and an accomplished playwright. He made his Broadway debut in the 2004 revival of ”Fiddler on the Roof” and received an Outer Critics Circle Award and a Tony Award nomination for his portrayal of Motel the Tailor.

His play “Almost, Maine” premiered at Portland Stage Company in 2004 and became the most successful play in Portland Stage’s history, selling out its run and garnering critical acclaim.

The play opened off Broadway in 2006 and has since become one of the most popular plays in the United States, with nearly 100 professional productions and over 5000 community, university, and high school productions to date. It is currently the most frequently produced play in North American high schools and was just released as a book in March of 2020.

“‘Almost, Maine’ is a collection of interlinked, slightly surreal, love stories set in a fictional place called Almost, Maine,” said Cariani. “In researching the book, I learned that 80 percent of Americans can’t see the stars because of light pollution. People from Aroostook County are among the 20 percent who can see the stars.

With schools not being in session for the remainder of the year, Barresi Financial invites Class of 2020 seniors to stop by their office at 34 North St. in Presque Isle to pick up their complimentary copy of “Almost, Maine.”

“We really hope to see many seniors stop by, enjoy the book and maybe get inspired to go after their dreams as well,” Violette added “It’s a small gesture that our firm could offer to the graduating class of 2020.”

Just when we thought we were out of the woods with kitten season, it has hit full force.  The past few days have been difficult answering the phone and hearing the stories of why people have litters of kittens they need to surrender.
Campaign Corner END_OF_DOCUMENT_TOKEN_TO_BE_REPLACED