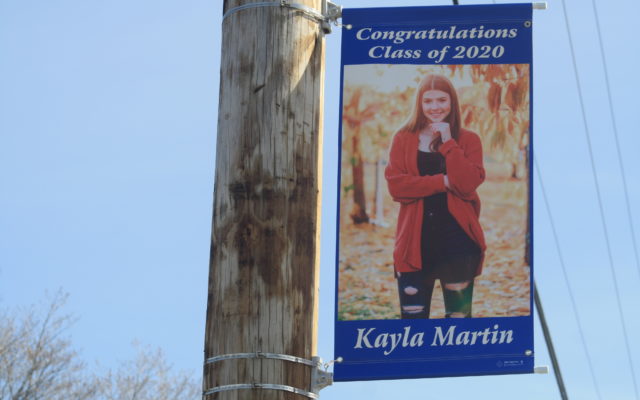 David Marino Jr. • May 27, 2020
It hasn’t been an easy semester for high school seniors, but a group of local mothers found a way to create community-wide recognition for Central Aroostook High School’s graduating class.

MARS HILL, Maine — It hasn’t been an easy semester for high school seniors, but a group of local mothers found a way to create community-wide recognition for Central Aroostook High School’s graduating class.

For the next three months, the communities of Mars Hill and Blaine will celebrate the students’ achievements daily each time they drive through town.

With help from several local sponsors, a group of Central Aroostook moms have put up 29 banners across Main Street in Mars Hill and Military Road in Blaine commemorating each graduating senior of the Central Aroostook High School Class of 2020.

The project all began with Tammy Giberson of Blaine about seven weeks ago. She had seen how devastating the semester had been for her daughter, Gracie.

With an array of scrapped senior events — including prom and Project Graduation — the class of 2020 was left without several milestones. It was an experience not unknown to graduating seniors across the country, but that didn’t make it any less devastating for the tight-knit communities of Mars Hill, Blaine and Bridgewater.

“They were just so sad,” Giberson said. “Every day something was being canceled on them.”

She and other moms wanted to do something that would celebrate the achievements of their seniors and cheer them up during a difficult time.

Giberson had seen on Facebook that a town in Ohio had celebrated its graduating seniors by putting their portraits on street poles. She decided to bring the concept home. 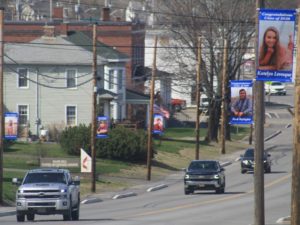 With vital help from other senior moms, including Sheri Welch and Janet Brewer, they got the “wheels turning,” contacting Presque Isle’s LaJoie Electric and Control Service and requesting permission for the project from Emera Maine and the Towns of Mars Hill and Blaine.

Emera, which became Versant Power on May 14, and both towns approved the measure, and LaJoie even offered to put the banners up at half price.

Things only got better from there: The original plan was for the parents all to play a role in paying the $3,000 bill for the banners. But as word spread around town, donations poured in. Through a combination of several small donors and a handful of large donations from local companies, the bill was covered in full.

“We didn’t have to pay one dollar,” Giberson said. “Our community pulled together and made this happen for our kids.”

The Mars Hill-based trucking company Blevins Logistics was one of a few large donors to the cause. President Michael Blevins said he was happy to play a role in recognizing graduating seniors. The father of children who recently graduated from Central Aroostook High, he couldn’t imagine what the 2020 seniors were going through.

“The whole thing is unfortunate,” Blevins said. “So, we tried to help them out a little bit.”

While she said right now wasn’t the easiest time for the seniors, they had been “resilient,” through the pandemic. As the school prepared for a different kind of graduation in June, she saw the banners as a natural part of the school’s efforts to honor the beginning of new chapters.

“It’s just one more way to celebrate the kids and their accomplishments,” York said.

The reaction from students had been positive, with some posting pictures with their banners on Facebook, Giberson said. Families had also enjoyed being able to spot their loved ones while driving through town.

Since the poles are paid for, Giberson hopes the community can use the infrastructure to celebrate graduating seniors in future years.

“We kind of may have started something,” Giberson said. “Maybe this will be another tradition.”

Just when we thought we were out of the woods with kitten season, it has hit full force.  The past few days have been difficult answering the phone and hearing the stories of why people have litters of kittens they need to surrender.
Campaign Corner END_OF_DOCUMENT_TOKEN_TO_BE_REPLACED