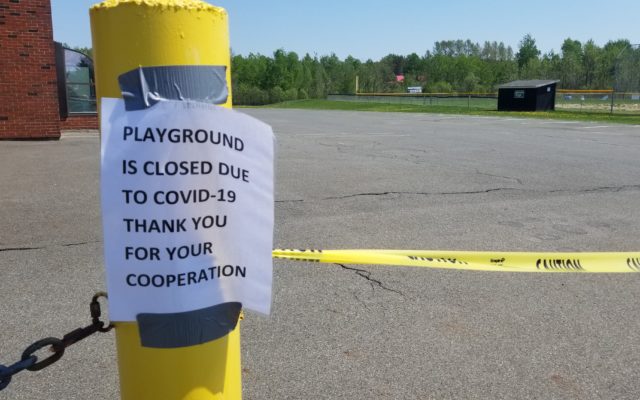 Joseph Cyr • May 30, 2020
The closures of school and town playgrounds, basketball and tennis courts has proven to be a polarizing topic among residents.

HOULTON, Maine — The closures of school and town playgrounds, basketball and tennis courts has proven to be a polarizing topic among residents.

For some, the issue is simple. They want a space where children can be children. Others, though, fear the risk factors of opening things too soon during the COVID-19 pandemic.

Houlton Town Manager Marian Anderson said the decision to keep the playgrounds, tennis and basketball courts closed has not been an easy one.

“The council continues to discuss whether or not to open the playgrounds,” she said. “They will meet again in a public session on June 8 and discuss the next steps for opening. COVID-19 has impacted everyone. We all appreciate the community’s understanding. We are working on the best way to reopen and appreciate everyone’s patience as we navigate how best to keep our families well.”

Public response on social media to the closure of town and school playgrounds was overwhelmingly in favor of seeing those areas re-opened.

“Considering the very low amount of cases, both active and past in The County as a whole, I believe it is completely out of line to continue to keep things shut down,” said John White Jr. of Houlton. “There’s protecting people and then there’s living scared in a bubble. Public spaces are owned by the people of Houlton and as a lifelong resident and taxpayer, I would say I demand action at this point.”

Steven Guertin Jr. of Houlton said he had mixed feelings about the playgrounds reopening.

“I would love for it to be open, but who’s going to go and disinfect it all the time?” he said. “If it’s going to put our kids in this community at risk of getting COVID-19, then I definitely wouldn’t open it up. [I am] just trying to watch out for our kid’s sake in this community. If I don’t want to take that risk then I definitely wouldn’t be taking my kids to the playground. They have their own swing set and their own pool for the summer. If they [the town] are not going to be there to keep the playground clean maybe they shouldn’t open it.”

Barbara Foster of Houlton said at the age of 85, it has been a long time since she has had to take children to the playground. “But if I did I would have a sanitizer with me to clean their faces and hands after playing,” she said. .

Jody Barker Merritt of Houlton said she felt the time has come to start regaining some semblance of normalcy, with people making their own decisions on how they protect themselves.

“I just feel if people choose to live in fear or are uncomfortable then stay home,” she said. “But for those who want to live and get back to a little normal, let us choose to live.”

Matthew Anderson of Houlton said he did not understand why the playgrounds and courts were closed in the first place.

“We’re not New York,” Anderson said. “School playgrounds and basketball courts should be open. Everything should. The last count I [saw] on flu deaths in the state of Maine was floating in the low 300s versus the 65 COVID-19 deaths. There is no reason for any of this. Kids are still playing together and grown ups are still visiting. It’s all about fear and control.”

Pat Pangburn, a summer resident of Ludlow who winters in California, said while the situation was probably safe at the moment, it could change quickly. “As summer progresses, I’m guessing that more cases will show up in Houlton and it won’t be safe. I hope I’m wrong. The problem is that by the time you hear about the cases, it may already be too late and children will have been exposed.”

Josh Bennett of Houlton said he felt some sort of refund should be given to taxpayers since they are not receiving the normal level of services from the town. “If they continue to keep tax paying facilities closed, there better be a reduced property tax,” he said. “Private companies can decide how they choose [to spend money], but if the Parks and Rec, as well as school facilities, are closed, then the money in the budget to have them open must be accounted for.”

Council chairman Jane Torres said Friday that she understands why the public is angry and hopes a compromise can be reached sooner rather than later.

“As a citizen who walks almost every night, it’s disheartening to see a public park with yellow tape all around the playground,” she said. “I almost think I would rather see caution signs saying play at your own risk. I think we need to give parents a choice.”

Torres noted her comments were not representative of the entire council.

I was mentioning to our board of directors this past week that I got a quarterly report from a large online retailer who will donate a portion of my purchases to a charity I select.
Campaign Corner END_OF_DOCUMENT_TOKEN_TO_BE_REPLACED