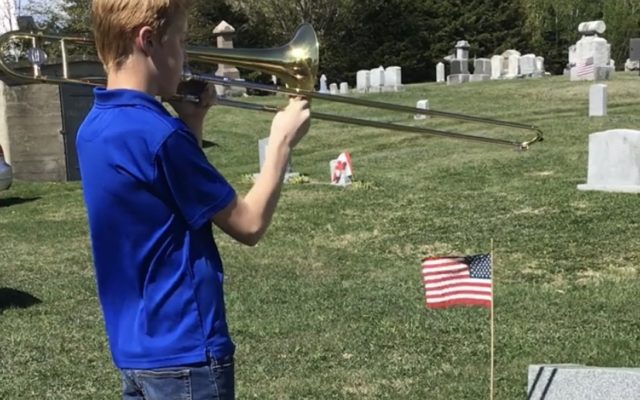 David Marino Jr. • May 31, 2020
This year was an understated Memorial Day for the Presque Isle area. Nonetheless, several local musicians found a way to celebrate the holiday in conjunction with the rest of the nation.

PRESQUE ISLE, Maine — This year was an understated Memorial Day for the Presque Isle area. Nonetheless, several local musicians found a way to celebrate the holiday in conjunction with the rest of the nation.

On Monday, May 25, at 3 p.m. musicians in Presque Isle, Caribou and Mapleton played taps — a bugle call played at flag ceremonies and funerals by the U.S. military — in near-unison.

They were one group of several taking part in a nationwide effort spearheaded by CBS News correspondent Steve Hartman, who had teamed up with former Air Force bugler Jari Villanueva to remind the country of the day’s message in the wake of COVID-19 event cancellations. 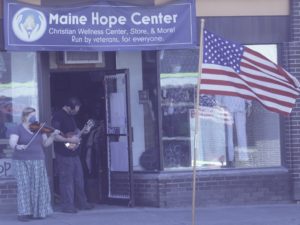 The Caribou-based married couple was motivated to play by their reverence for those who fought as well as their own previous military service — Kenneth was in the Army and Helena the Air Force. The couple met at the Defense Language Institute — a Department of Defense research facility — where they both studied Mandarin Chinese.

Helena Garrett — who had decorated the storefront with a mannequin wearing nurse garb in honor of essential workers with store manager Jessicia Provost based on an idea from director Terrence Reidy — said their demonstration was also about supporting essential workers as they risk their lives to contain a virus that has killed more than 100,000 people in the United States.

“We want to honor health care workers. Those are kind of trenches too,” Helena Garrett said. “Even janitors that are cleaning hospitals.” 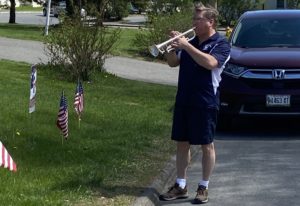 Presque Isle High School students Hunter Stubbs and Ricky Goupille played “echo taps” at the Mapleton Memorial in front of Mapleton Elementary School. “Echo taps” is a two-horned arrangement played at military schools when a current or former cadet who attended is killed in action.

Presque Isle Middle School Music Director Patrick Bragdon played a version on trumpet in front of a house on Hillside Street featuring pictures of Mainers who died in combat.

Presque Isle High School student Sidney Smith also played a version at his home in front of an American flag.

In a time that seems more politically divided than ever, Kenneth Garrett said Memorial Day was a celebration of the apolitical service that American soldiers provide every day. He noted that a friend of his had died from a mortar blast overseas while in line for food.

“There’s no politics in that,” Kenneth Garrett said. “Just loss.”

Just when we thought we were out of the woods with kitten season, it has hit full force.  The past few days have been difficult answering the phone and hearing the stories of why people have litters of kittens they need to surrender.
Campaign Corner END_OF_DOCUMENT_TOKEN_TO_BE_REPLACED